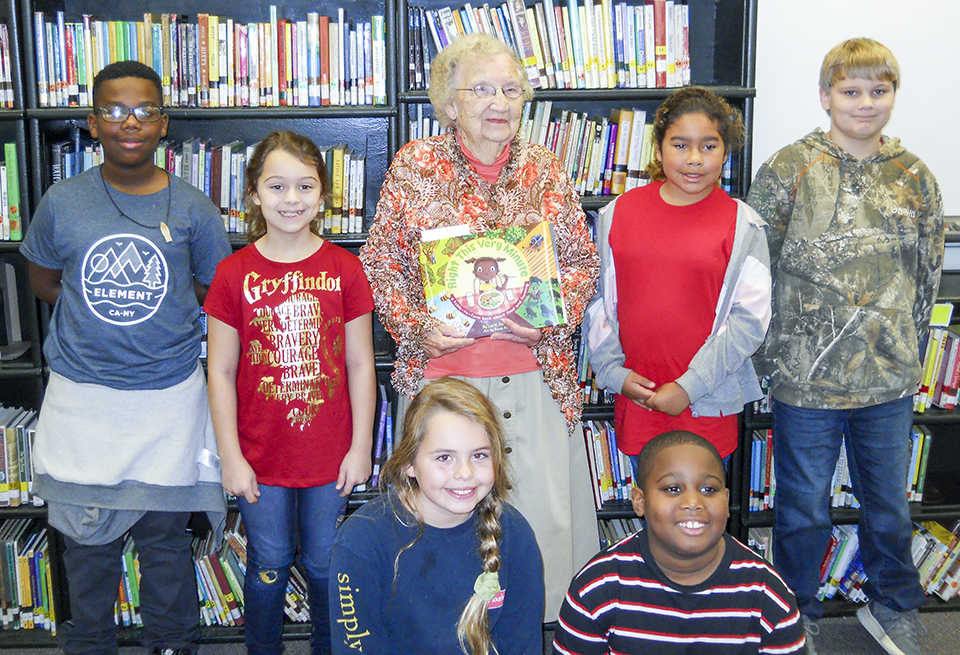 Above, Lilian Slay is shown with a group of fourth graders at LaFayette Lanier Elementary School as she presents them a copy of their new book. — Submitted photo

Lilian Slay and her daughter, Chambers County School Board member Mary Terry, visited each of the county’s public schools Monday to recognize winners of the 2019 Farm City coloring, poster and essay contests.

Third through eighth-graders throughout the district, as well as Lanett City Schools, were eligible to participate.

At Fairfax Elementary, third-grade student Brayden Knight was awarded a blue ribbon as the first-place winner. Ellie Landreth received a red ribbon for second place and Brylee Davis was given a white ribbon for third place.

The contests are held each year in conjunction with the observance of Alabama Farm-City Week, which focuses on the important partnership between local farmers and their urban neighbors.

In addition to awarding ribbons to the winners, Mrs. Slay also presented each school librarian with a book entitled, “Right This Very Minute: A Table to Farm Book About Food and Farming,” published by the Alabama Department of Agriculture.

Each of this year’s contest winners will be invited to attend the annual Farm-City banquet on Tuesday, Nov. 19, at the Alpha Building in LaFayette, beginning at 6 p.m.