Chambers shuts out Meadowview, ready for No. 6 Bessemer 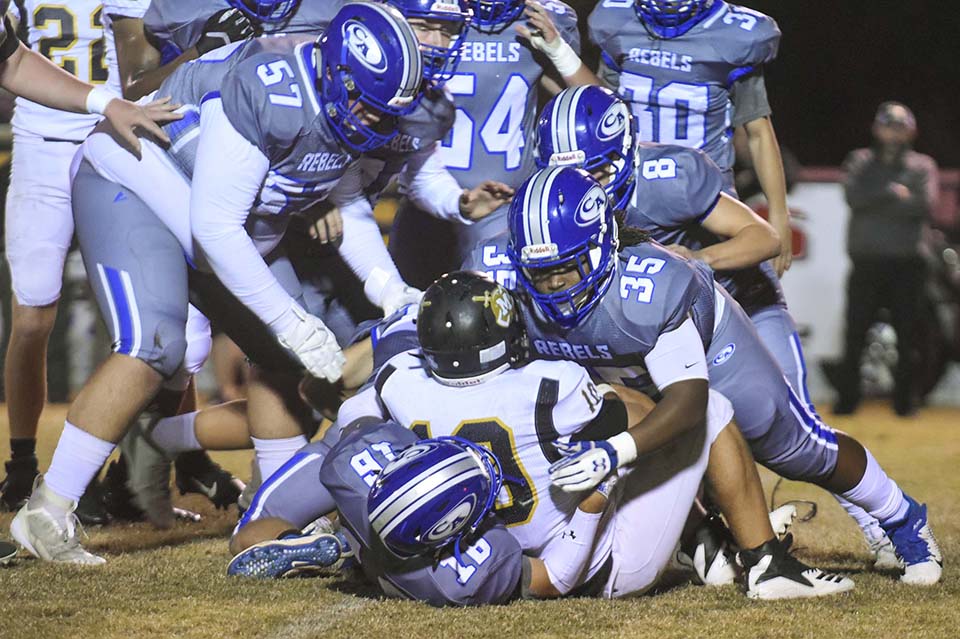 “I feel good,” Chambers Academy head football coach Jason Allen said. “We got to play everybody. It got one-sided pretty early, so we were able to cruise in, try to get everybody off, try not to get anybody hurt and get ready for a hug top-10 showdown against Bessemer Academy next week.”

Rebels senior running back Braxton Allen scored the first touchdown of the night on a run with 10:21 remaining in the first quarter.

On Meadowview’s first drive, the visitors were able to convert one first down before giving the ball back to Chambers Academy. On the ensuing Rebels possession, junior quarterback Payton Allen completed a 31-yard touchdown pass to Caydon Smoot with 5:55 to go in the first quarter.

Meadowview ran a unique option formation on offense for the majority of the night in an attempt to throw off Chambers’ defense of who received the ball. The play-calling worked for one play in the first quarter, as Meadowview was able to cross midfield and invade the red zone on a big run.

“Meadowview’s much improved then they were last year. Coach [Bob] Taylor does a great job and those guys have a chance to start making some strides next year.”

Meadowview’s promising drive, however, ended in a forced fumble and recovery by Chambers Academy senior Brody Smoot with 2:44 to go in the opening period.

Coach Allen said that he’s been impressed with the performance of his entire defensive front all season.

“Dijon Darden is the best defensive tackle in all of AISA, regardless of classification,” he said. “I wouldn’t trade him for anybody. I think Brody Smoot has turned into a fantastic player, very quick, athletic, great pass rusher around the football. Jake Waldrop is so big, people have a hard time blocking him. Our defensive line sets the tone. It’s the best defensive line that I’ve ever coached. I haven’t seen a defensive line in our state, on film, that’s better than them.”

On the offensive drive for the Rebels, senior Dijon Darden powered his way to an eight-yard run. The first quarter ended with a big Braxton Allen run to get the Rebels into Meadowview territory once again.

Within the first minute of the second quarter, Payton Allen scrambled his way into the end zone to give the home team a three-touchdown advantage.

The Rebels punted for the first time all night with 7:21 to go in the second quarter, as Payton got a Chambers’ roll all the down to Meadowview’s one-yard line.

The visiting team snuck out of its end zone to pick up a first down, only to punt the ball back to the Rebels shortly after. On the first play of the next drive, Payton Allen threw a touchdown pass to sophomore Jordan Benbrook.

Payton Allen also made his fourth extra point of the night after the score.

“That’s big,” Coach Allen said of the extra-point conversions. “It’s something that we’ve struggled with over the last couple of years. We’re trying to get some consistency there, or we’re just going to be going for two every time. Tonight, he proved that maybe we can just kick extra points. You need every point you can get going down the stretch into the playoffs.”

Once the celebration from the intermission’s results ended, the Rebels picked up where they left off, as Josh Holliday caught a touchdown pass with 6:18 to go in the third quarter.

The Rebels scored another touchdown late in the contest, as many of the student-athletes were prepared to change clothes and head up to the gymnasium for the homecoming dance.

“Yes, I’ll stick around for a little bit and party, just a little bit,” senior lineman Conner Gregory said after the win. “I’m going to bust out the [dance, the] cat daddy. [The win] just makes it 10 times better.”

Next up for the Rebels is AISA No. 6-ranked Bessemer Academy. Although the game has no implications for Chambers Academy’s region standing, it will be a great measuring stick for the postseason.

Coach Allen said that he’s ready for the challenge.