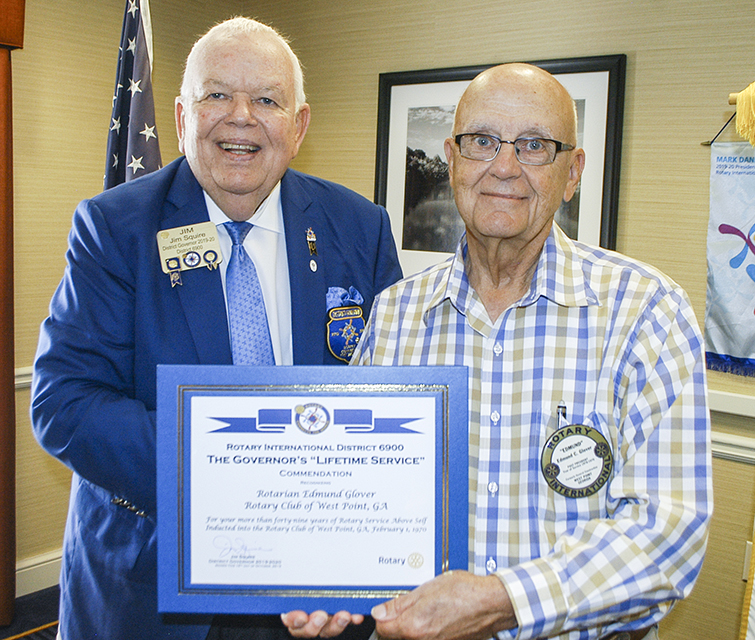 On Thursday, Edmund Glover (right) received a Lifetime Service Award on having been an active member of the West Point Rotary Club for going on 50 years. District Governor Jim Squire (left) told him that Rotary would be 100 years old next May and he’d have in 50 years with the club before then. Glover credited his dad, the late Cliff Glover, on having set a good example for him. The late Cliff Glover lived to be 104 and was an active Rotarian late in life. -- Wayne Clark

LANETT — The West Point Rotary Club is approaching a milestone anniversary. Having been chartered in May 1920, it will be 100 years old next spring.

Just prior to that, club member Edmund Glover will have been an active Rotarian for 50 years.

District Governor Jim Squire of Sandy Springs, Georgia paid a visit to the club Thursday, commended current members on having been part of something special and presented Mr. Glover a Lifetime Service Award for his commitment to the local club and support of Rotary International.

Rotary is an international service organization with a stated purpose is to bring together business and professional leaders in order to provide humanitarian service and to advance goodwill and peace around the world.

It is a non-political and non-religious organization open to all people regardless of race, religion, gender or political preference. At present, there are more than 36,000 clubs worldwide in more than 200 countries. More than 1.2 million people are members of Rotary International.

In receiving the Lifetime Service Award, Glover said the one thing he enjoyed about Rotary was the fellowship.

“Coming here is one of the highlights of my week,” he said. “This club does some very good things, and I’m glad to be part of that. My dad set a good example for me. He was a Rotarian for many years.”

His dad, the late Cliff Glover, lived to age 104 and was an active Rotarian late in life.

Rotary’s national theme of the year is “Rotary Connects the World.” Squire said he liked that and had his own personal motto: “People Stay in Rotary in Fellowship.”

“This club is all about that,” Squire said. “Your president, Debbie Kelley, is all about having fun and good fellowship. You are engaged in some wonderful projects at the West Point Rotary Club.”

Squire cited the Walt Meadors benefit golf tournament for Valley Haven School and the club’s support of the Alabama Sheriffs Girls Ranch as another.

Rotary International has the elimination of polio as one of its major goals.

“There is some good news on this,” he said. “Nigeria has been polio-free for three years now and all of Africa is now polio-free as well.”

Rotarians will be celebrating that Oct. 24 at a special event at the Centers for Disease Control (CDC) in Atlanta.

Squire invited members of the club to the District 6900 Conference April 30-May 3, 2020 at Jekyll Island. Rotarians will be celebrating the club’s centennial with a Taste of the District at Jimmy’s Fish Camp and a Kentucky Derby Party.

In the spirit of overcoming polio, Squire said he liked the advice President Franklin D. Roosevelt gave his son about public speaking: be sincere, be brief and be seated.