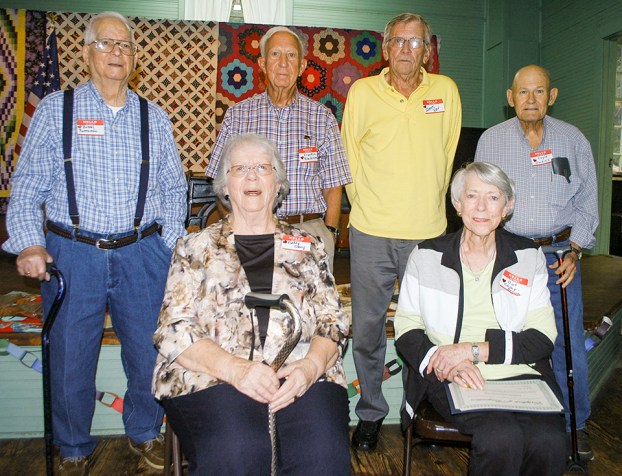 On Sunday afternoon, the above local residents talked about attending the Fredonia School in the 1940s. Seated, from left, are Betty Blackmon Story and Dot Camp Brown. Standing, left to right, are Bobby Blackmon, Franklin Blackmon, James Blair and Doyle Owens. The building was a school from 1919 until 1948 and has served the area as the Fredonia Community House since 1951. — Photo by Wayne Clark

Fredonia’s best-known and most-visited building was constructed 100 years ago as a school, and the first classes were held on Oct. 8, 1919. The present building replaced an earlier structure that had served the community as a schoolhouse. It was a two-room building with a wraparound porch and a steeple with a large bell.

“Does anyone remember the year 1919?” asked FHA President J.J. Frickert, who served as the program emcee. “The president was Woodrow Wilson, Congress passed an act to establish the Grand Canyon as a national park, the 19th amendment which gave women the right to vote was passed, prohibition began that year with the passage of the 18th Amendment, and Felix the Cat appeared as the first cartoon character in a short, animated film.”

Worldwide, millions of people died from a pandemic known as the Spanish flu, and locally West Point experienced its worst flood of the 20th century.

The stage inside the clubhouse’s main room was filled with memorabilia of an old schoolhouse. There were vintage desks and books of the period such as “Jack and Jill,” “365 Bedtime Nursery Rhymes” and “The Master Christian.”

Highlights of the day were the recollections of several people who attended the school in the 1940s.

Betty Blackmon Story remembered having had “lovely, sweet but strict teachers, people like Grace Magnum and Mrs. Frazier, who played the piano. My best memories of the school are of the people I knew there, the teachers and the things we learned.”

Franklin Blackmon said one of the chores he was assigned was to take the trash out back and burn it.

“I remember a very cold day in January when I was called on to burn the Christmas tree,” he said. “It had turned completely brown at the time. It was really warm when I set it on fire.”

Bobby Blackmon remembered a time when he got in trouble because someone had loaned him a copy of The National Geographic and he was more interested in reading it than his class assignment.

“It’s such a joy to be here today and to remember the things we did when we were in school here,” Franklin Blackmon said

Franklin Blackmon said he could remember students having to make their own paper cups when they would drink water drawn from a well.

“Sometimes we’d drink from the same dipper,” he said. “I can’t remember ever getting sick after doing that.”

There was one time people didn’t drink from that well for several days.

“That was when some boys dumped a whole can of Prince Albert tobacco into it,” Franklin Blackmon said.

On cold winter days, the classrooms were heated by wood-burning stoves in the corner. There’s an often-told story of a young boy who would frequently leave his desk to stand near that stove on cold days. When the teacher scolded him one day for it. He thought of as a way to get back at her, so the next day, he brought a box of 22-caliber bullets and put them in the stove before it was lit.

When that stove was lit and got good and hot, the bullets started exploding. They had to evacuate the entire school that day.

Dot Camp Brown said one of the highlight days of school was Coca-Cola Day.

“Everyone would get a free Coke, a pencil, tablet and ruler,” she said. “I remember Mary Lee Adams being our teacher for one year. She’d previously taught at Shawmut and eventually went back there. She would bring us celery and carrots. Alvin Shaw was my sweetheart when I was in the fifth grade. I remember Maxine Daniel, Annie Ruth Daniel and Eleanor Burnett being in my class.”

Brown said she had to shake her head and smile when she recently heard a news report on television of schools being closed in Columbus when the air conditioning wasn’t working.

There was a period after the school closed in 1948 when the school building fell into disrepair, and Fredonia residents looked for ways to have a new use for the building.

Fredonia-area children were going to the school in Five Points, and their old school was empty.

They finally settled on having a Community Club with the building being refurbished and serving as the clubhouse.

“The Fredonia Community Club was formed in 1950,” J.J. Frickert said. “Its purpose was to discuss agriculture, the latest practices, the welfare of the community and county, recreation and the development of leaders in the community.”

Frickert said Fredonia residents came together to clear the hedges that had grown up around the building, replace broken windows, repair and paint the building.

“They were unpaid volunteers who not only donated the sweat off their brow but their materials as well,” she said. “For all these years, the Fredonia Community Club has strived to uphold an agreement with the state of Alabama.”

There’s a framed citation on the wall inside the clubhouse that goes back to 1952 when the Cooperative Extension Service at Alabama Polytechnic Institute (now Auburn University) awarded the Fredonia community an Award of Excellence in appreciation for converting Fredonia School into a Community Clubhouse.

“Around the same time the Fredonia Community Club was formed, the Fredonia Homemakers group came together,” Frickert said. “These ladies met once a month, had an educational or information program and were treated to elegant snacks at the home of one of the members. Most of these women were part of the Fredonia Community Club as well. They sewed curtains and created a library for the Community House. Also, they planned Halloween parties, Christmas parties, and events such as dances and dinners. There was a youth club formed for the younger generation of Fredonia.

To this day, the Fredonia Homemakers are an integral part of the stewardship of maintaining the Fredonia Clubhouse.

“In closing, I want to acknowledge that this celebration today is because this community is hardworking and dedicated to each other,” Frickert said. “The rich tradition of rolling up your sleeves and using every muscle for a just cause has been tested over time, tried and found true. It’s never been just one person. It’s always been the community. And since I’ve lived in quite a few communities, I know how rare indeed Fredonia is.”

VALLEY — A Lanett man was arrested Monday afternoon in connection with the Oct. 9 robbery of the Waffle House... read more