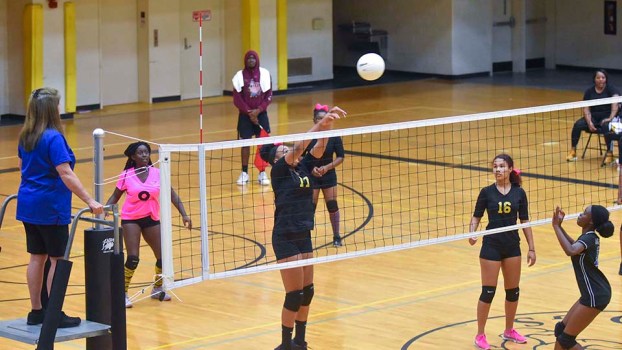 Rashad Milligan | Times-News return to sender: LaFayette eighth-grader Akijah Woody rises up at the net on Tuesday night against Notasulga.

“We made a lot of mistakes,” LaFayette head volleyball coach Beverly Kavookjian said. “Overall, I liked what I saw. [Notasulga] played well so you can’t take that away from them.”

A lot of the points scored in the first set of the match were very short, as out-of-bound serves or aces landed for both teams early on.

“We just missed a lot of serves,” Kavookjian said. “That hurt us big time, but we’re young. We’re still getting there. Next season will be another [step].”

LaFayette trailed early in the second set, but the points looked more encouraging. Each point began to become more of a back-and-forth battle between the Blue Devils and Bulldogs, and the home crowd began to get into it after LaFayette cut a 15-10 deficit to 16-15.

“That was so nice,” Kavookjian said of the crowd, before smiling.

The LaFayette marching band was also in attendance, performing live stand tunes in the upper deck of the gym during match breaks. Tuesday was the Bulldogs’ second and last home game of the season.

“To see them here and supporting us meant the world to me,” Kavookjian said. “I know it meant a lot to the kids. You can’t say anything better than that. A team is not just ‘I,’ it’s not just ours, it’s everybody at this school.”

After the crowd’s resurgence, Notasulga began to pull away with a 24-20 lead, before the Bulldogs got within two points and the crowd got loud again.

Once LaFayette reached 23 points, trailing by one, the home fans got even louder, with most spectators standing up. Notasulga reached game point on a botched LaFayette serve.

“They were so close, they’re always so close,” Kavookjian said. “It’s just finishing, we’ve got to learn to finish and take advantage of the serves.”

Notasulga opened the third set with junior middle hitter Destiny Brown controlling the match. LaFayette, however, came back again to take a lead at 4-3. The Bulldogs’ lead grew as large as six points, and LaFayette held the lead until the score was tied at 22. With the momentum, Notasulga completed its six-point streak and won the match.

“You have so many rallies, which I thought was great,” Kavookjian said. “Somebody’s got to lose that rally. Unfortunately, we were on that end. We made some very costly mistakes. In that regard, you’ve got to give it to Notasulga. They played it out, they finished it out, and that’s what it takes to win.”

Eighth-graders Akijah Woody and Toniya Collier, as well as junior Ebony Williams, who played her second game as the Bulldogs’ new libero, were named as a few standouts from Tuesday night by Kavookjian.

“I see a lot of good players,” she said. “We only had three returners, so everybody else is brand-spanking new. That’s a good thing and we don’t have any seniors.”

Next up for the Bulldogs is the area tournament next Tuesday, where LaFayette will face Horseshoe Bend, Ranburne and Woodland.