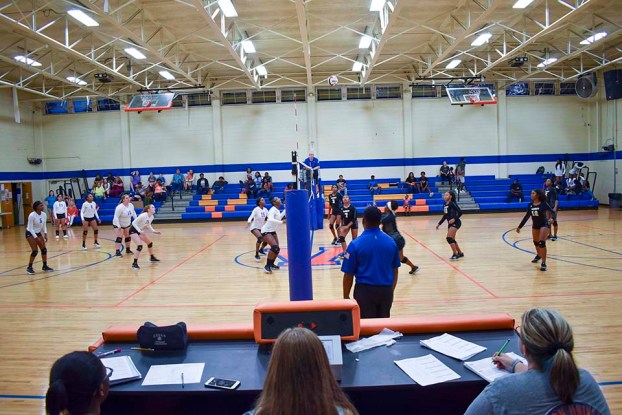 “I’m extremely proud of my girls, I’m even more proud of our growth,” Lanett head volleyball coach Krisse Story said. “We started off a little bit slow, we were very inconsistent, but we’re on a two-game winning streak and I’m extremely proud of the girls. Of course, it’s always good to beat our crosstown rival, my alma mater, Valley High School.”

Story later said that she was appreciative of Valley allowing Lanett’s seniors being recognized before the match as well.

Each set of the night began going point-for-point with each team. The first set began 12-12, the second set was 9-9 and Lanett only led by a point, with a 11-10 lead to start the final set.

“I think we just got a little discouraged after calls weren’t going our way after a lot of balls kept falling,” Valley head volleyball coach Summer Lewis said. “At the beginning of the match, we were fired up and ready to play, then at the end of the match when things weren’t going our way, we kind of fell off and didn’t have the same energy. When you lose that energy, you lose focus of the game.”

While members of the Rams grew visibly frustrated on the court, Lanett remained composed, led by even kill seniors Alicia Abner and Ladaija Thomas. Thomas seemingly always gave the Panthers a point and possession when momentum appeared to slightly shift on to the home team.

“This senior class has been with me for three years now,” Lewis said. “I love them just like they’re my own children and I am going to miss them.”

With a week left in the regular season, the Panthers’ main goal is to still win the area championship, but Monday night’s win was a sweetener as well.

“Lanett never wants to lose to Valley,” Story said. “Even in jackstones.”