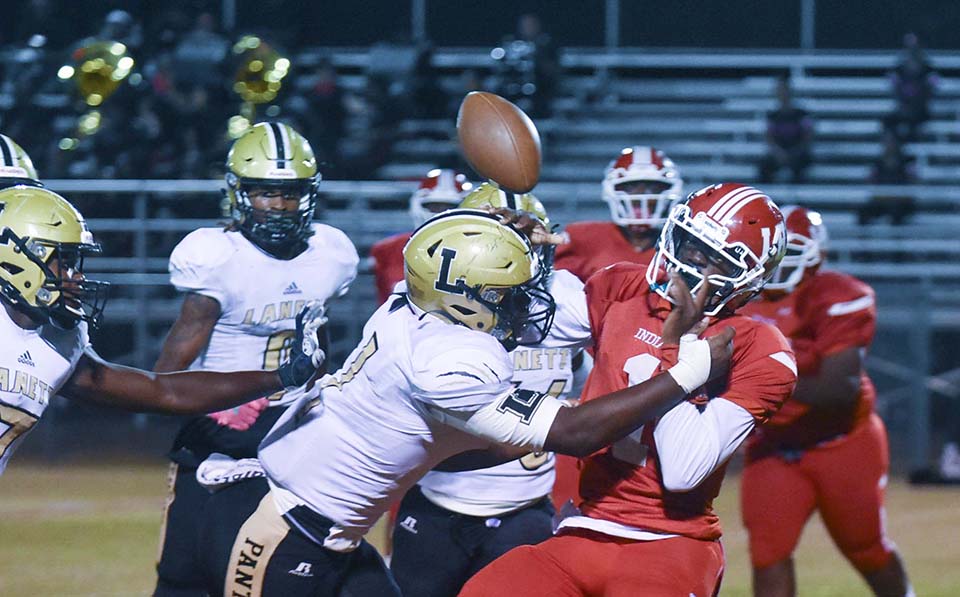 “Hats off to that defensive staff again,” Lanett assistant football coach E.J. Webb said. “Those guys are prepared every week. They came out, they showed it, they pressed their will and were ready to push it.”

Lanett capped off the opening drive of the night with a touchdown pass from senior quarterback Kristian Story to junior wide receiver Tae Hurston with 10:45 to go in the first quarter.

A minute after the touchdown, senior B.J. Smith forced a fumble on Loachapoka quarterback Aaron Frazier on a loose ball that was recovered in the end zone by junior Seidrion Langston for the second Panthers’ touchdown of the night with 9:49 to go in the opening quarter.

After Lanett and Loachapoka exchanged punts, Hurston caught another touchdown pass with 3:14 to go on a slant. Sophomore D’Quez Madden ran the ball in for the two-point conversion to increase the Panthers’ lead to 20-0.

Less than a minute after Hurston’s second touchdown catch of the night, Smith recovered another Loachapoka fumble near the goal line.

“Our defense is hungry,” Webb said. “They want it. Once our defense gets after it, they put our offense in great positions to make plays.”

The turnover resulted in a one-yard touchdown reception by senior wide receiver Quae Houston with 2:03 to go in the quarter. Smith converted the two-point conversion to give Lanett a 28-0 lead.

In the opening play of the second quarter, Langston caught a pass from Story and made two spin moves to find his way into the end zone to increase the lead to 35-0.

With 4:50 remaining in the first half, Smith recovered his third fumble of the first half. The turnover set up a touchdown run that began near midfield for Story. Story also had another long touchdown run earlier in the night that featured an impressive one-on-one juke in open field against a Loachapoka defender.

“Kristian has always been a leader in the classroom and on the field,” Webb said. “He leads by example. Whatever he does, they’re going to do. His leadership from sophomore year to now has always been there. Anytime we’re in a bad situation, he’s going to put the team on his back, and he’s going to carry this team. That comes with him watching film day in and day out, that comes with him studying the game of football.”

Webb also complimented the efforts on the defensive line by senior Eric McCants and sophomore Caden Story, who he said is “growing up before our eyes” and is “coming into his own as a defensive end.”

Lanett remains on the road next week against region-opponent Verbena (1-6, 0-4). The game marks the final road game of the regular season for the Panthers.