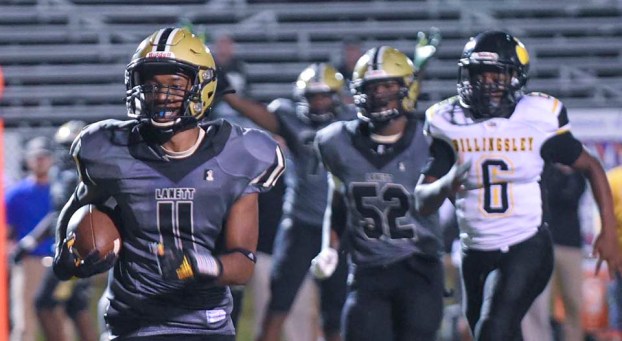 Rashad Milligan | Times-News to the races: Lanett junior punt returner Kadarius Zachery sprints in open field to the end zone in the second quarter of Thursday night’s victory over Billingsley.

LANETT — Despite getting off to 5-0 start in the region, the No. 3 Lanett Panthers still entered Thursday night with a chance of facing a multitude of tie-breakers for seeding this season’s playoffs.

It didn’t take the Panthers very long to put all other possibilities to rest in a dominant 56-0 win over Billingsley to be officially crowned the 1A Region 4 champions.

“We played with a lot of energy and enthusiasm,” Lanett head football coach Clifford Story, Jr. said. “We told them all week ‘let’s just have fun.’ We haven’t been having fun lately, and I don’t know [whether or not] they were just putting pressure on themselves. I told them to just go out and play football. You guys got this.”

Lanett didn’t waste much time in the opening minutes of the game as senior quarterback Kristian Story found Jalen Gibson for a two-yard touchdown with 6:33 to go in the first quarter.

A big punt return by Lanett junior Kadarius Zachery was called back with 4:03 remaining in the opening frame, but the Panthers eventually scored on the drive with a short punch in from senior running back B.J. Smith.

On the ensuing drive, senior Dametrious Johnson had a scoop-and-score from a Billingsley fumble for the first touchdown of his high school career. Coach Story revealed after the game that Johnson was considering not even playing football this year.

“I didn’t even know what to think when I got the ball, I just thought ‘keep running it and don’t stop,’” an excited Johnson said after cracking a big smile. “Honestly, I love the game of football. I honestly want to keep playing.”

The Panthers did have a couple of turnovers in the first half, however, as Zachery fumbled a punt return near the end of the first quarter and Kristian threw an interception to Billingsley junior Devin Blackmon in the second quarter.

On the first play of Billingsley’s drive after Kristian’s interception, the four-star Alabama commit laid out a big hit on a Bears’ ball-carrier near the Panthers sideline.

Kristian gave the home fans and his fellow teammates a moment to remember with 8:55 to go in the second quarter when he front-flipped into the end zone at the end of a 56-yard touchdown run. The extra point from senior Rutillo Olea was good to increase Lanett’s lead to 28-0.

With four minutes remaining in the first half, Zachery had another big punt return to get Lanett deep into Billingsley territory. A couple of plays into the drive, Kristian found Abner alone in the end zone for a 34-yard score.

Lanett sophomore defensive end Caden Story then stepped up on the next drive for the Panthers’ defense and made two consecutive tackles for a loss with just over two minutes remaining. Billingsley then decided to run the ball on the opposite side of Caden on third down, which ended up being short and forcing another punt.

Zachery then took the punt return 48 yards back for another Lanett touchdown.

On the ensuing kickoff, Billingsley fumbled the kick return and the Panthers recovered with 38 seconds to go before the half. Kristian then took advantage of open field and scored on a 19-yard scramble.

The final score of the night came on the first play of the night when junior running back Donovan Shealey ran 65 yards for a touchdown.

Olea finished the night making all of his eight extra-point attempts.

Senior Quae Houston then came onto the field as the Panthers’ quarterback on the next drive before Caden ran the offense in the fourth quarter.

The shutout adds to Lanett’s streak to end the regular season, defeating Loachapoka, Verbena and Billingsley by a combined score of 138-0.

“The defense is nasty, they’re filthy,” Coach Story said. “They take it personally. In practice, I have to tone it down because I can’t afford to get anybody injured, but they go at each other’s head. I’m just being honest. That’s what we need because there are going to be some games where defense is going to have to win some. If they keep doing that and the good Lord keeps blessing us with health and strength, the defense is going to win some ball games for us.”

Before the game, the Panthers senior class of Smith, Houston, Kristian, Johnson, Olea, Chancellor Spence, Rovilan Castro and Eric McCants were recognized on the field.

“They’ve done an awesome job,” Coach Story said. “They have three-straight region championships and a state championship under their belt. A lot of guys have grown up. I’ve seen them mature since they’ve been here. Overall, I’m just happy for them because there are so many times when one ego gets in the way, but they haven’t let any egos get in the way. They’re just doing what they’re coached to do and working extremely hard. What I do like about them, and the coaches will tell you, that no matter what I tell them to do, they don’t question it, they don’t mumble, they don’t do any of that, they just do what they’re asked to do with no hesitation.”

After a bye week to end the regular season, the Panthers will return home to host the first round of the state playoffs.

Notasulga will face Wadley on Friday night to determine the rest of the seeding in the region.