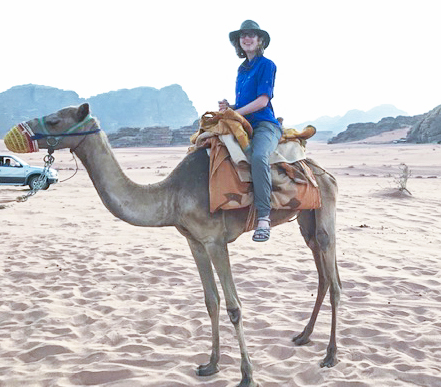 Cobb archivist Robin Brown admits to being a big apprehensive about riding a camel for the first time. “They tell you to lean way back before the camel rises up, and you’d better do it,” she said. “But once he gets to moving it’s kind of neat.” She did this on her recent trip to Jordan. Her tour group was in Wadi Rum at the time. The name means “Valley of the Moon” and refers to the area’s surroundings. Because of its moonscape look, “The Martian” was filmed there in 2015. — Submitted photo

VALLEY — On Wednesday, Cobb Archivist Robin Brown was the guest speaker at the weekly meeting of the Kiwanis Club of Valley and talked about the trip of a lifetime she took in September to the Middle East. She was part of a tour group that spent several days in Jordan, a small country in a very ancient part of the world.

“It’s in a contested area where everything can get dicey,” she said. “But the people we met were friendly, and we felt very safe.”

On one side of Jordan is the long simmering conflict between Israel and the Palestinians, to the north are the war-devastated countries of Syria and Iraq and to the south are Saudi Arabia and Egypt. Israel and Jordan have been at peace since 1994. A constitutional monarchy, Jordan has been ruled by King Abdullah II since 1999. Omar Razzaz has been the prime minister for a little more than a year.

“She celebrated a birthday in Jordan, and we had a surprise for her,” Brown said. “We got her to ride a camel.”

Greatly uplifting for Cox was the opportunity to be baptized in the River Jordan at Bethany, the same place where tradition holds that Jesus was baptized by John the Baptist. Four years ago, Pope Francis officially recognized the spot as a holy site.

Brown said that Jordan is an archaeologist’s dream and she very much enjoyed being there given that she had studied archaeology at Florida State University.

“The land is ancient and has been occupied before written history,” she said. “It has been documented since writing was invented. Ancient kingdoms like Edom and Moab, which are mentioned in the Bible, are within Jordan’s borders. Jordan is today a developing country. Although limited in natural resources, the country offers tourists unforgettable sites, friendly people and a safe way to experience the Middle East. Despite its neighbors, Jordan is widely seen as a safe and stable country.”

Amman, Jordan’s capital city, is home to approximately 1.3 million people. The city has seen many invaders in its history. During the Hellenistic era, it was called Philadelphia. “That name stuck for several centuries,” Brown said while illustrating her talk with a PowerPoint presentation.

“Excavations are ongoing,” she said. “More interesting things will be discovered in the future. It was a Roman city starting with the First Century B.C. The famed emperor Hadrian visited around 130 A.D. There’s still a Roman road in Jerash and you can still see ruts left by chariots. There’s also ruins of buildings that once lined the road.”

“Gahara is another ancient Roman city,” she said. “It’s only three miles from the border with Syria. Most Roman sites have marble runs, but in Gahara there are basalt ruins. This is local volcanic stone. From Gadara, the Sea of Galilee can be seen on one side and the Golan Heights on the other.”

The Golan Heights are a part of Syria that has been occupied by Israel since the Six-Day War in 1967. Melting snow from its mountaintops sustains nearby rivers. There’s also some oil and natural gas there.

Mount Nebo (a.k.a. Mount Pisgah) is another site frequently visited in Jordan. This is where Moses was told by God to “look at this land with your own eyes, since you are not going to cross the Jordan.” This is where Moses saw the Promised Land. According to tradition, Moses is buried on Mount Nebo. A Byzantine church dating to 530 A.D. was once on the site. A monastery run by Franciscan monks is there today. There are some surviving mosaics at Mount Nebo.

“They are significant because they have been defaced,” Brown says, explaining that this dates to the time when the Catholic church held that it was sinful to display images of human or animal faces.

The tour group visited Ajlun Castle, a fortress built by Saladin the Great. It protected routes between Damascus and Jordan. It even had a pigeon post where homing pigeons were kept.

“The castle was built over a Byzantine church,” Brown said. “A small mosaic showing fish and loaves of bread has been discovered here.”

One of the most interesting sites was Petra, widely considered one of the Seven Wonders of the Modern World. Petra, which means rock in Greek, is a city of carved sandstone. It was controlled by the Nabateans before the Roman conquest of 106 A.D.

“The Aramaic word for the city is Raqmu, which means colorful,” Brown said. “The buildings are carved from red sandstone with beautiful strains of black, purple and white within the rock. Petra grew in importance as demand for spices, especially frankincense and myrrh, increased.

Trade routes took these valuable commodities through Petra. The Nabateans took advantage of this to offer hospitality and protection for merchants.”

Brown said that there are a total of 927 carved facades in Petra.

“The monastery is the most difficult one to reach,” Brown said. “You have to climb 922 steps, but it’s worth it.”

The most famous facade is the one at the Treasury building. It’s been seen in many movies including the 1989 action-adventure film “Indiana Jones and the Last Crusade.”

Brown said it was built between 39 to 50 A.D. as a tomb for Petra’s greatest ruler, Aritas IV, who was Herod the Great’s father-in-law.

Brown said that Petra by night is a must see.

“It’s a 2.3-mile walk that starts at sunset,” she said. “Luminaries light the way and you walk through the canyon to the Treasury.”

Aqaba is Jordan’s only city on the coast.

“It’s something of an international city,” Brown said. “It’s shared by Jordan, Israel, Egypt and Saudi Arabia. The advantage of that is there’s no sales tax.”

Wadi Rum is one of Jordan’s special places.

“It’s called Valley of the Moon,” Brown said. “It’s said to be the only place on earth with a landscape that resembles the moon. Petroglyphs carved in the rocks here date to about 12,000 years ago. According to tradition, Moses and the Israelites got lost in this desert in their exodus from Egypt. It was here in 1916 that Lawrence of Arabia led his band of Bedouins to resist, obstruct and undermine the oppressive Ottoman Empire. Most Jordanians still regard Lawrence of Arabia as a good man who fought for Arab independence.”

A very famous site in Jordan is the Dead Sea, the lowest point on earth.

“It’s not really a sea, it’s a lake fed by the Jordan River,” Brown said. “It’s not only the lowest place on earth (420 meters below sea level) it’s also one of the saltiest with a salinity of 34 percent.”

Brown said that she very much enjoyed taking a mud bath and floating in the Dead Sea. “It’s one place you won’t sink,” she said.

“One of our last stops was Bethany, the place where John the Baptist baptized Jesus,” Brown said. “Pope Francis visited this site in 2015 and declared it the official site where Jesus was baptized. Our tour guide baptized Louise Cox at the same site. She also brought back some water from this site to baptize her grandchildren.”

A highlight of the trip was the food.

“It was fresh and delicious!” Brown said. “We had lots of hummus, pita, tabbouleh, grilled chicken, lamb, fish and roasted vegetables.”

The tour group flew from Atlanta to Paris and then to Amman.

“We landed at 2 a.m.,” she said. “It felt eerie to be there at that time of day, but it was okay. We were just unfamiliar with it. We never felt unsafe the whole time we were there. The accommodations were very nice.”

Brown said the continuing war in Syria had been stressful for Jordan. More than one million refugees had crossed the border into the country. Continuing fighting had been destabilizing for the entire region.

“Christmas is a state holiday in Jordan,” Brown said. “I think it’s the only predominantly Muslim country where that’s true. There is a good many Christians there. It was still summer time when we were there. The temperature got to 107 when we were at the Dead Sea.”

Brown said the trip had made an old proverb come true for her: “When you travel you are speechless, but when you’re back home you are a storyteller.”

Team WHIP to walk on Saturday

When Narfunda Ross became a breast cancer survivor, she knew she wanted to give back.  “People fear the treatments and... read more