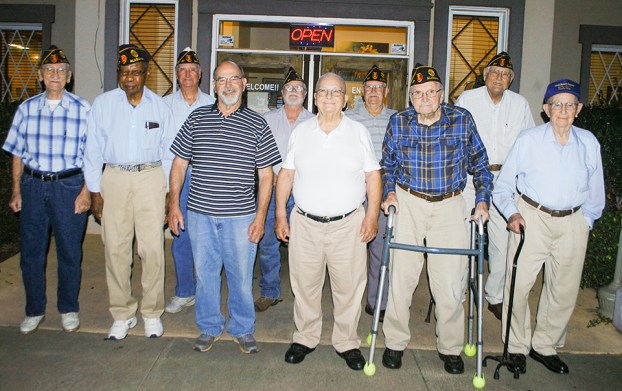 American Legion Post No. 67 welcomed two new members at Tuesday evening’s meeting at Sunny’s restaurant in Valley. They are Marine veteran Ralph Pitts and Navy veteran Phil Pugh. Shown above, in front from left, are Bobby Elliott, Mack Lett, Pitts and Pugh, Ned Burton and Bernard Paschal. In the back, from left to right, are Johnny Miles, Sammy Newton, Billy Tolbert and Ray Anderson. The local post will be hosting a Veterans Day program at 11 a.m. on Monday, Nov. 11, at Veteran Memorial Park in Valley. -- Wayne Clark

VALLEY — At their monthly meeting on Tuesday, American Legion Post 67 welcomed two new members and made plans for this year’s Veterans Day program at 11 a.m. on Monday, Nov. 11, at Veterans Memorial Park.

The two new members are Ralph Pitts and Phil Pugh. A native of Valley, Pitts served with the U.S. Marines for four years and served in Vietnam. Pugh served in the U.S. Navy and was a crewman abroad the USS Lexington.

Post Commander Lanny Bledsoe thanked the City of Valley for the job it does in maintaining Veterans Park. He also thanked the city for allowing the use of the Community Center in case of rain on Memorial Day or Veterans Day. The Community Center also hosts the annual Day for the Veteran, when the local post arranges for veterans to have one-on-one meetings between them and officials who can help them with their benefits.

Bledsoe said it concerns him that only about 5 percent of Americans have ever served in the military, and only around 1.5 percent are serving now.

“Anyone who loves their freedom should appreciate what these young men and women are doing,” Bledsoe said. “Their lives are full of challenges. When they are told to go somewhere, they have no say-so in it. “

He said he hopes to have more attendance for a public program like the Memorial and Veterans Day programs.

Mary Sue Newton said that she and fellow members of the Legion Auxiliary would like to have more local women participating with them.

“We meet at 1 p.m. on the first Monday of the month at Bradshaw Library,” she said. “If you are related to someone who is serving in the military or who served in the past, you are welcome to join us.”

Mrs. Newton said the Auxiliary would be taking part in a special ceremony at this year’s Veterans Day program.

Bledsoe thanked the staff of Bradshaw Library for having hosted an excellent program on Sept. 30. Gov. Kay Ivey was in town to unveil a plaque for Chuck Moore’s “Sarge and Scrappy” statue on the library grounds. Local WWII veterans Bernard Paschal, Walter Okrutny, Bill Hayes, Howard Kitchens, John Lyons, and Yancey Sanders were recognized during the program.

Skyhawks defeat Columbia, look to climb back in postseason picture