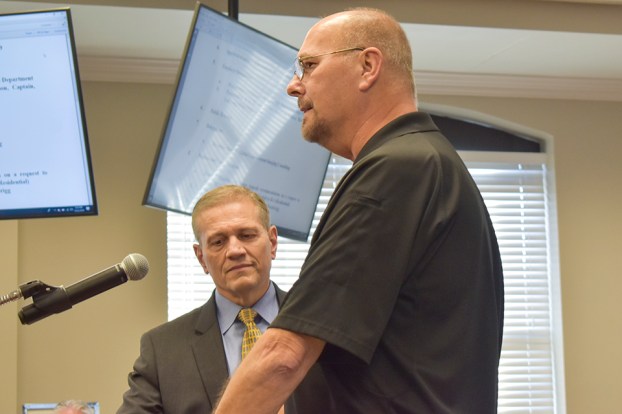 Troup County Sheriff’s deputy Billy Baker, who was diagnosed with cancer earlier this year, was honored by the LaGrange Police Department during Tuesday’s LaGrange City Council meeting. LaGrange Police Chief Lou Dekmar is shown in the background. — Alicia B. Hill

Baker has worked in law enforcement for more than 35 years, and he was recently diagnosed with esophageal cancer.

Baker has worked for the TCSO for years, but according to LPD Chief Lou Dekmar, Baker began his law enforcement career at the LPD.

“Billy came to work for the LaGrange Police Department in December 1985,” Dekmar said. “In 1992, he was promoted to corporal and also worked extensively in our traffic unit.”

“That is over 30 years old and [due in] no small part to the initiative that Billy was involved in when it first began,” Dekmar said. “He also was a member of the Honor Guard. He was recognized in 1992 for administering CPR for someone who suffered a heart attack while operating a vehicle.”

Baker went on to serve at the TCSO for more than a decade, and Dekmar said that LPD wanted to recognize Baker’s lasting impact on the department and the people he served.

“Although Billy just spent 12 years with us, because of his dedication, his professionalism, his commitment, the law enforcement service, we wanted to recognize him with an honorary retirement credential and badge,” Dekmar said. “Billy, on behalf of the police department, we want to let you know that your service is still recognized not only by those that work here, but also by the citizens that you helped serve.”

Baker said he was honored by the recognition, and he plans to keep fighting to get better.

“I’ve had some health issues here lately, and I heard a saying the other night that if you truly love your job, you are never going to work a day in your life,” Baker said. “Over the last 30 odd years, I don’t feel like I’ve worked a day in my life. I always love what I do, and thank you all for recognizing that, and it means a lot to me as I go forward with the challenges that I face now.”

Baker has served with the TCSO for almost four years, and Sheriff James Woodruff said that he was glad to see him honored.

“I think it is wonderful that the city and the police chief decided to honor him,” Woodruff said.

In August, a motorcycle, Jeep and hot rod benefit ride was held for Baker beginning at the Elk’s Lodge in LaGrange. The event raised more than $24,000.

Lunch ‘N’ Learn to host author on Nov. 7 at library