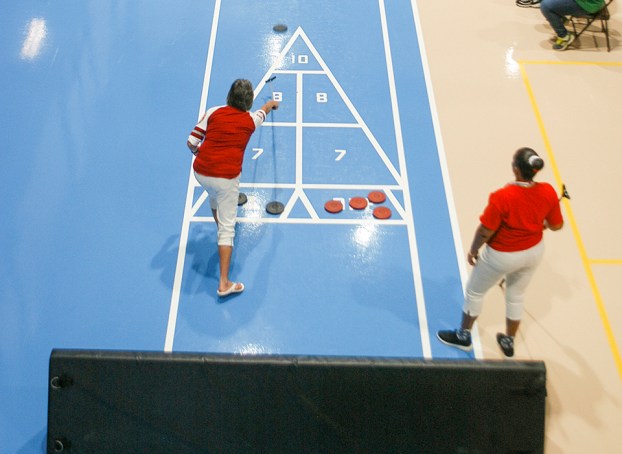 VALLEY — A 7 p.m. EDT dinner inside Valley Community Center’s Community Room marked the conclusion of three days of fun and games on the part of seniors from one end of Alabama to the other.

More than 400 Alabamians in the 50 and older age group took part in the 29th annual State Masters Games, participating in everything from throwing softballs, an outdoor 5k run, shuffleboard and checkers.

Most of the competition came to a close on Wednesday. Bowling will be taking place at Auburn Lanes on Thursday with the swimming events held in the Community Center pool and the domino finals in the Hood/Gray Room.

The golf singles and a two-person scramble will take place at the Point University Golf Club on Monday and Tuesday.

At an awards banquet on Tuesday evening, long-time Valley Parks and Recreation employee Patrick “Cooter” Williams received the prestigious President’s Award for his long-time participation in the games. The award was presented by Sandi Wilson of Trussville Parks & Recreation of Trussville, Alabama.

The President’s Award recognizes a volunteer, sponsor or athlete for exemplary efforts to make the State Masters Games a success.

This year marked the sixth time Valley Parks & Recreation has hosted the State Games. The Community Center had previously been the host site in 2006 and 2007, 2012 and 2013 and 2018. It’s one of few places in the state where almost all the Masters Games events can take place at one location. Everything but bowling and golf can take place either inside or on the Community Center grounds.

A proclamation issued by Gov. Kay Ivey at the start of the Games noted physical fitness as a lifelong pursuit for all age groups and all levels of athletic ability.

“The citizens of Alabama recognize the importance of physical fitness and nurturing active and constructive leisure habits in developing not only the physical aspects of health but the mental and emotional aspects as well,” the proclamation reads.

Throughout the past two years, the Community Center underwent a multi-million dollar renovation, including the construction of a new senior center, significant improvements to the pool and much interior painting.

“We are proud of our new senior center,” Mayor Leonard Riley said at Monday’s opening ceremony. “Our seniors have been enjoying it immensely … We hope your stay here will be enjoyable.”

VALLEY — At their monthly meeting on Tuesday, American Legion Post 67 welcomed two new members and made plans for... read more