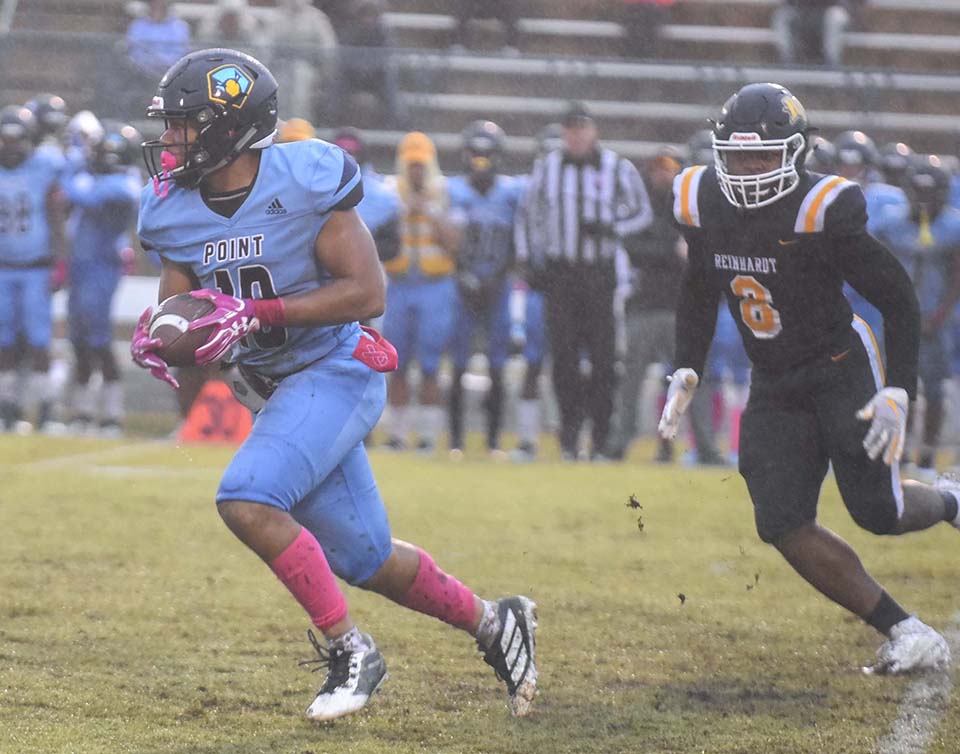 “I felt like the guys came ready to play,” Point head football coach Julius Dixon said. “The enthusiasm, the excitement. Reinhardt being a top-tier team in NAIA football, I thought our guys came excited to play. We just didn’t play smart.”

The Eagles opened up scoring early with a 13-yard touchdown run from Billy Hall. The score ended a 10-play, 44-yard drive for Reinhardt. The field position for the visiting team on the scoring drive was that the Skyhawks’ offense stayed on the field on fourth down with a plan to make the Eagles defense jump. If the defense didn’t jump offsides, then Dixon said he was going to call a timeout and bring out the punting unit. However, Point’s center snapped the ball and the Skyhawks turned the ball over on downs.

The evening game was the most anticipated home contest of the Skyhawks’ season, as a hyped Point sideline was flagged for unsportsmanlike conduct in the first half before being issued another warning in the second half.

The elements of mother nature played its part in the matchup, as well. Temperatures hovered around the mid-50s with rain falling all night, creating a muddy field and slippery ball. There were a total of 11 fumbles on the day, six recovered by the opposing team for turnovers.

Both teams combined for a total of 18 pass attempts and 93 rushing attempts. MarQuez Jackson led Point on the night with 58 rushing yards on 16 attempts. Jackson was also responsible for the Skyhawks’ biggest offensive play of the game with a 22-yard run to get Point in the red zone in the third quarter when the home only trailed by a touchdown. Jackson’s jersey was covered in mud by halftime, and with less than three minutes remaining in the third quarter, he limped off the field. Dixon said he was unaware of Jackson’s status in Saturday’s postgame availability.

Still trailing by a touchdown, Point defensive back Jarrod Ollie got the crowd on its feet after returning an interception 34 yards to begin the fourth quarter.

“I felt like with the adverse weather conditions we were facing, turnovers were crucial,” Dixon said. “Getting that sent a message, and we just couldn’t capitalize on it like we needed to. We’ve got to figure that out and give ourselves the best chance moving forward to do the things that we know we’re capable of doing.”

After the next Skyhawk offensive drive, Reinhardt invaded scoring range with a big run with 11:54 to go in the ballgame. With 7:59 to go, Trevae Cain scored on a 10-yard touchdown run to put up the visitors by two scores.

Point quarterback Micah Maxey fumbled the ball with 3:01 remaining, setting up a 23-yard rushing touchdown for Reinhardt running back M’Calun Lanier on the following play. It was Maxey’s second fumble of the night, and the first fumble he lost.

The Eagles missed both extra-point attempts on the final two touchdowns of the night.

Maxey received a majority of the snaps at quarterback in the contest. Sophomore Keenan Wise, who has split time with Maxey at the position for most of the season, got banged up at the beginning of the game, Dixon said. His immediate status was unknown after Saturday’s game.

The matchup against Reinhardt marks the last ranked opponent on the Skyhawks’ schedule this season. All five of Point’s losses have come against ranked opponents, and both victories were against the unranked competition. The team has five more games remaining in the regular season, four being in-conference.

The Skyhawks hit the road again next week to face Union College in Kentucky. The next time Point will play in Rams Stadium is on Nov. 9 for the team’s homecoming matchup against St. Andrews.