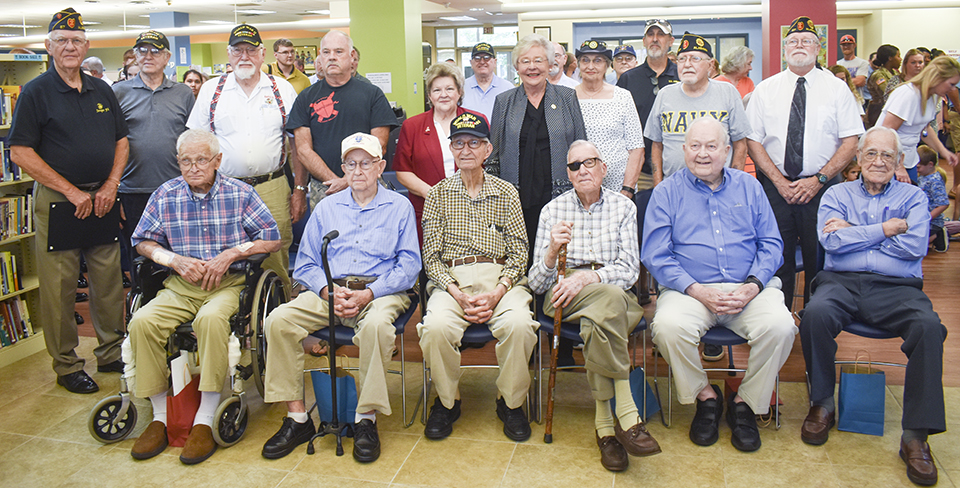 There are a million reasons to escape to the H. Grady Bradshaw Library in the middle of a workday, but Monday was an extra-special occasion.

Gov. Kay Ivey made a stop at the library Monday to honor artist Chuck Moore, to recognize local World War II veterans and to celebrate Alabama’s bicentennial. Ivey is currently on a mission to visit all 67 counties, which understandably made her visit to Valley a short one.

We don’t see the governor often in Chambers County, but it was good to see her smiling and upbeat on Monday, just a few days after news broke of her cancer diagnosis.

Ivey first turned her focus to Moore, the local artist known for turning recycled machine parts into incredible masterpieces. She unveiled a marker to recognize Moore as the artist of the Sarge and Scrappy statues on the library’s property, and she spent some time looking through some of his other work as well.

Moore created the Sarge and Scrappy statues in honor of the men and women who serve our country through the armed forces, so it was only fitting that several World War II veterans were seated on the front row.

“Each one of you is a member of our country’s Greatest Generation,” Ivey told them. “We should never forget what your generation did to defend our nation and to protect our freedoms.”

Ivey also took time to honor the Valley World Series baseball team, which has now been honored at the city, county and state level. Maybe the White House will call the team next.

Although she honored local people, Ivey’s main focus for the trip is Alabama’s upcoming birthday celebration on Dec. 14. The state has accomplished a lot in 200 years, including right here in Chambers County.

We appreciate the governor stopping by as the state continues counting down its upcoming birthday.