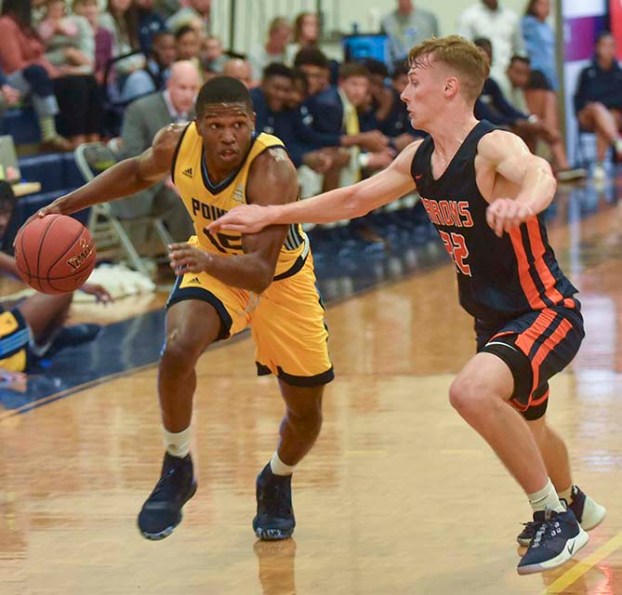 The Skyhawks came out energized in front of the home crowd, firing on all cylinders from beyond the arc in an effort led by juniors Ray Reeves and Lorenzo Freeman, as well as senior Sae’Quahn Rogers.

A pair of first-half dunks from junior Corey Bowen also got the crowd into the game early on.

“We’re excited to have this type of crowd, and I hope it continues,” Deer said.

The Skyhawks held the lead at the midway point of the first half, and there wasn’t much separation created from either team until the last four minutes before halftime.

Brewton-Parker took a 33-25 lead with 3:19 to go in the first half as its defense momentarily flashed a full-court press on the Skyhawks to keep the momentum going. Brewton-Parker’s players found themselves getting easy looks near the basket and taking advantage of second-chance opportunities offensively.

On the other end of the floor, Point cooled down from the team’s hot start.

Reeves left West Point Gym with 15:34 remaining in the second half before eventually returning to sit behind the Skyhawk bench for the remainder of the night.

After the game, Deer said that the immediate diagnosis was that he suffered an ankle sprain after blocking a Brewton-Parker shot and that the team will have more information available to them on Wednesday morning.

Point cut the visitor’s lead to five just under 10 minutes to play. Fans began to get in the game again when the Skyhawks made an impressive stop to regain possession.

With 8:50 remaining, another Bowen dunk erupted the home fans, keeping the Skyhawks within reach.

Brewton-Parker responded to Point’s comeback attempt with a run of its own, knocking down an open corner three on a second-chance opportunity and completing an old-fashioned three-point play on a strong drive to the hoop.

Rogers single-handedly kept the game competitive coming down the stretch, scoring 11 of the Skyhawks’ last 16 points of the night.

“With Ray being out with the ankle, it was unfortunate that Sae’Quahn had four fouls because we need him on the floor,” Deer said. “His experience, his shot-making is important to our team.”

The Skyhawks travel to Atlanta on Friday to face off against reigning Sun Belt Conference-champion Georgia State before staying on the road and facing Allen on Saturday. The Skyhawks return home on Nov. 9 against Kentucky Christian University at 6 p.m.