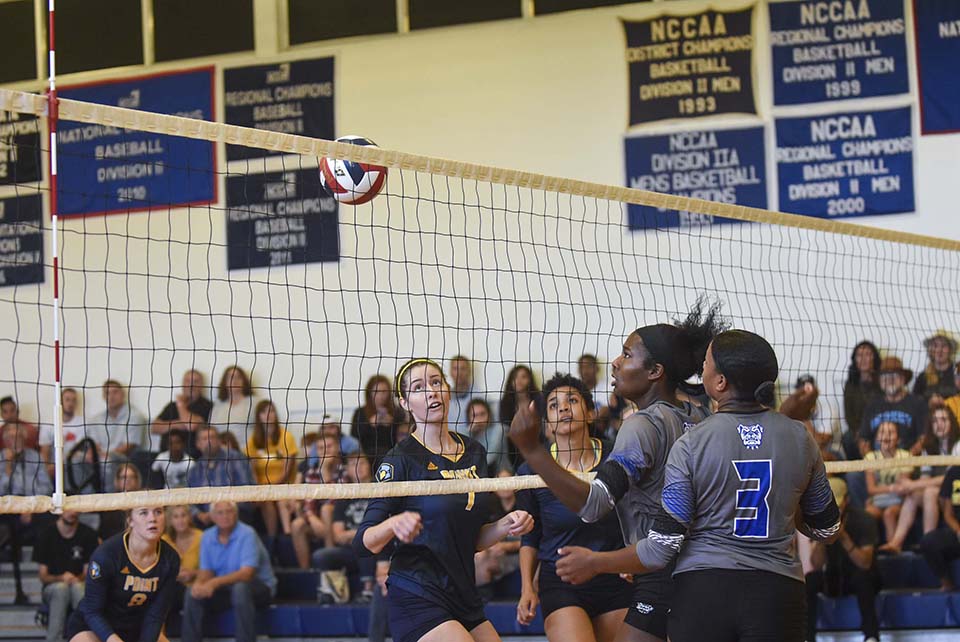 UP FOR GRABS: Point seniors Emma Boles, No. 8, Charlotte Havrisik, No. 7, and sophomore Sarah Bauchman watch a ball come down as Tennessee Wesleyan senior middle blocker Avery Hilliard and junior outside hitter Majorie Smith, No. 3, do on the other side of the net. Photo by Rashad Milligan

“We’re not counting,” Point head volleyball coach Joe Herrera said. “The only thing we’re counting is 1-0. That’s what we do, that’s what we’ve been doing for the last 12 games, taking it one game at a time. We are a completely different team than we were 12 games ago. We’re growing together, fighting together, working together and executing. Even when we don’t play our best, we still find ways to execute, come out and we’re learning. There’s still a long way to go, nothing has been accomplished. We still have to take it one day at a time, come back to the gym on Monday and get ready to get better.”

The string of wins might come as a surprise to some, as Point began the year 4-7.

“It was just us coming together and learning how to click,” Point senior right-side hitter Charlotte Havrisik said. “We came in with a lot of differences. [We had] new freshmen, a new coach and a different way of running things. Once we got the hang of everything, I think the seniors did a great job of pulling us up and holding us to a high standard, together, that helped us turn it around.”

Havrisik and sophomore outside hitter Rachel Ellis led the Skyhawks with 10 kills each on Saturday. Senior libero Tessa Burns finished with 20 digs, while senior setter Julia Felix finished with 14 digs.

For the second consecutive Saturday, the Skyhawks lost the second set of the match, a period of the match that the team has often struggled with this season, Herrera previously said.

“We didn’t execute as crisp as we did in the first, third and fourth sets,” Herrera said on Saturday. “I think [Tennessee Wesleyan] started to block better and they were more aggressive on offense. He’s got some really good hitters, a great libero [junior Tia Madden], but it was great to see our girls come back in the third and fourth sets and make adjustments.”

“We have to just read her, and then pray,” Herrero said of Hilliard before cracking a smile. “That’s about it. She’s good and [junior Majorie Smith] was a big-time outside hitter. She just kept swinging that ball and she was smart. Fortunately, we stopped her, and fortunately, in our third set, our serving by [freshman] Audrey [Blaskchke] was very aggressive, which helped us to keep them out of their system.”

Burns, Felix, Havrisik, outside hitter Faith Pearson, defensive specialists Alex Battles and Emma Boles were all recognized before the match on senior day. The Skyhawks have three more home games, but the Tennessee Wesleyan match was the last Saturday home match of the year.

The majority of the senior class was a part of the last two Skyhawk teams that set program records for most wins in a single season.

“These seniors have done an awesome job of being together and setting a standard for our program and a mantle that we need to pick up next year to keep going,” Herrera said. “It’s a great graduating class. They worked hard and stuck together in their highs, their lows and they have set a great precedent for our program. Not just the seniors, but also [former point head volleyball coach] Amanda [Jones]. Coach Amanda Jones and that graduating class have set a great example to follow.”

Point returns to the court on Tuesday night to face, the last program they lost to on Sept. 5, Reinhardt.