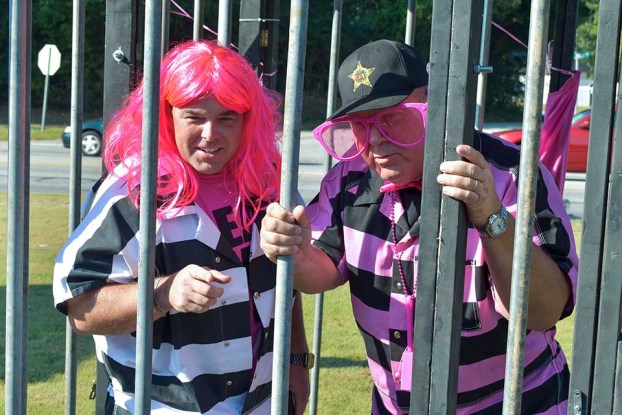 VALLEY — The Chambers County Sheriff’s Office raised more than $6,000 for breast cancer this past Friday morning at Renasant Bank in Valley.

Sheriff Sid Lockhart and Major T.J. Wood spent five hours locked in a cell with a bond of $2,500 to be released, but even after hitting that goal, the two decided to get as much as possible.

Wood said Tuesday that he and the sheriff were at the bank from 9 a.m. until about 2 p.m. Friday. He said several people noticed what was happening while driving by and stopped to give what they could.

“That is what is so great about our community,” Wood said. “There are so many people in this community who don’t mind helping. They never let us down when it comes to an event where they are raising, or something is that needed. They always show up and help so much.”

The sheriff’s office hosted a similar event in 2018, but the results were not as successful. Wood said the department was only at the scene for about two hours and raised about $1,500 in 2018.

According to Renasant Bank Branch Manager Nancy Warren-Holland, all of the proceeds raised in October will go to the Breast Cancer Research Foundation of Alabama.

However, just because Lockhart and Wood made bail, there are a few others in law enforcement who are willing to spend time behind bars to raise money.

Valley Police Chief Tommy Weldon and Lanett Police Chief Johnny Wood have both agreed to step in the makeshift cell sometime in October.

Weldon said Tuesday that there isn’t a concrete time as to when the Valley Police Department will participate, but it’s going to happen.

“I might have to recruit some help this year,” Weldon said, adding he was the one in the cell in 2018.

He said the police department likes to get involved in any causes in the community it can reasonably help with, and for some officers, breast cancer is a personal battle.

“Some of our employees have battled cancer, and we currently have some of our family members in our department that have cancer,” Weldon said. “So, anything that we can do to raise money for research and keep battling, we want to do that.”

Johnny Wood said he was approached by the bank to share the cell with Weldon and his response was “absolutely.”

“It is our responsibly as individuals seen in the community to show support for such causes,” he said. “We have involved ourselves in a number of philanthropies for raising money for cancer. Any time an opportunity to raise awareness or to get involved, we try to get to so.”