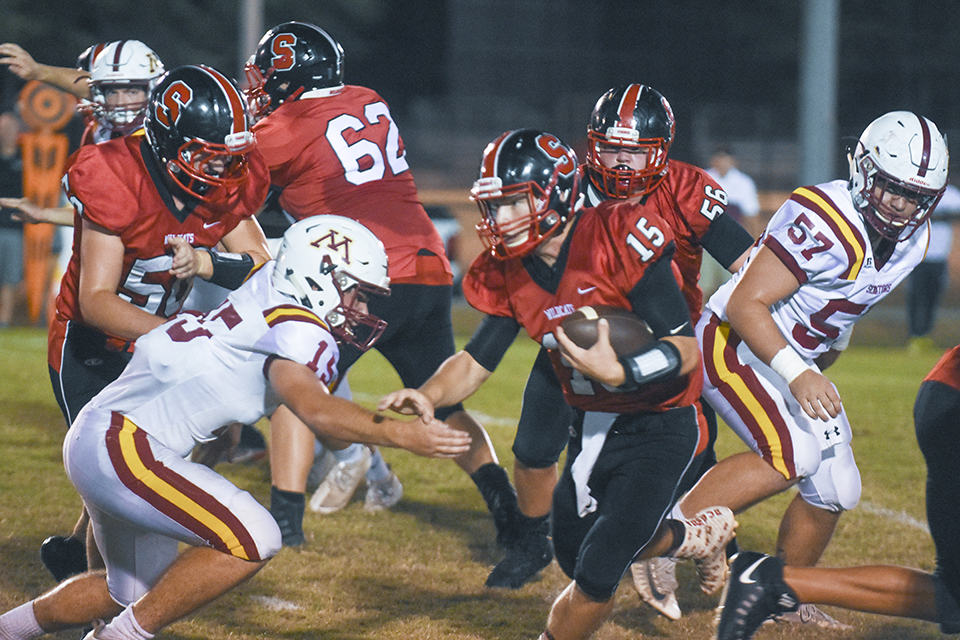 LANETT — On a big night for Springwood senior quarterback Jordan Plank, the Wildcats didn’t have enough to come from behind to secure a win, falling to the Morgan Academy Senators 24-14.

Plank said moving into second was exciting for him but achieving the goal in losing effort but a bit of damper on the accomplishment.

“I would have really loved to do it in a win,” he said. “I’m glad that it is over because that lifts a weight off my shoulders that I have been carrying.”

Although it’s Plank’s name that goes in the record books, he’s quick to point out he had some help along the way.

“It’s not about me, and I wouldn’t be where I am if I didn’t have my (offensive line),” he said. “They did great tonight. We have some amazing blockers up front.”

Plank finished the night completing seven-of-16 passes for 84 yards and a rushing touchdown. Morrison finished with four catches for 51 yards.

Springwood head coach John Gartman said his team gave a good effort but too many mistakes may have cost them the game.

“We had our opportunities to win,” he said. “The main things I preach to the guys is to play hard, play with class and play with discipline. I think we did two of the three.”

Springwood would drive the ball down the field on the strength of a 30-yard run from junior running back OJ Tolbert. But, a bad snap over the head of Plank on fourth down ended the drive.

After the half, and trailing 10-0, Gartman began calling pass plays for Plank.

The Wildcats marched down the field on passes from Plank to Tolbert and Morrison. Springwood was helped by a defensive pass interference call on fourth down before Plank hit Morrison once again for 21 yards to put his team in the red zone. The next play was quarterback sneak into the end zone by Plank from two yards out.

However, the Springwood defensive failed to make a stop as Morgan continued to run the football with success with Utsey and senior running back Will Ingram. The drive was capped off with a 9-yard touchdown run, putting Morgan up 17-7.

However, Springwood was not ready to quit.

Junior running back Kannon Key started the drive with a 20-yard rush, taking the Wildcats over midfield. That play was followed shortly by a 48-yard Tolbert touchdown run, bringing Springwood within three points once again.

Tolbert led the Wildcats with 105 rushing yards on nine carries and a touchdown.

The following kickoff, Morgan junior wide receiver Josh Brown took the ball to the Springwood 40-yard line, which set up the Senators with good field position. Utsey capped off the run-heavy drive with another  touchdown, putting Morgan up 24-14.

Gartman kept calling Plank’s number to bring Springwood back, but on a fourth-down play on Morgan’s side of the field, Plank hit Morrison on a 7-yard route but Morrison dropped to his knees about a half-yard short of the first down marker.

After a three-and-out by the Springwood defense, the Wildcats were once again in scoring position. On a fourth-and-12 at the Morgan 22, Plank threw to Morrison for what seemed to be a touchdown, but the officials called the pass incomplete as the ball came out of the senior wide receiver’s hands as he went to the ground.