Valley and Lanett Police team up for breast cancer awareness 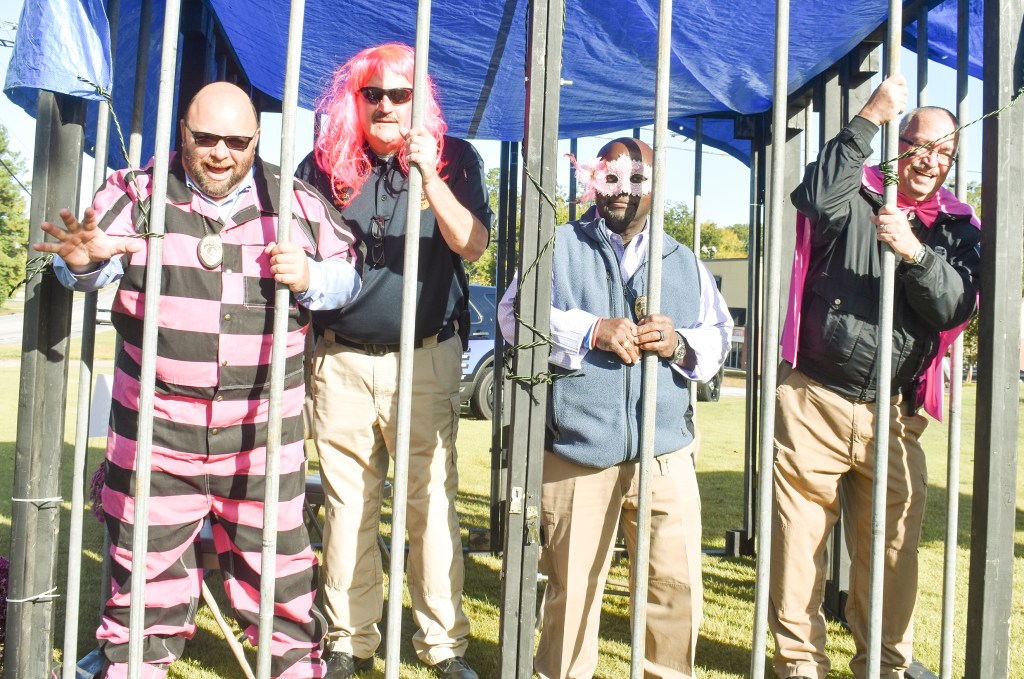 Local police officers agreed to step inside a makeshift cell in Valley Thursday afternoon to raise money for breast cancer awareness outside of Renasant Bank in Valley. Participating officers from left to right are Lanett Police Chief Johnny Wood, Valley Police Chief Tommy Weldon, Lanett Lt. Teddy Morris and Valley patrolman David Maddux. Collectively, the foursome raised a little more than $1,000 on the afternoon. Below, the officers receive a visit from a member of the community. — Dustin Duncan

VALLEY — Four officers from the Lanett and Valley Police Departments were locked in a jail cell Thursday afternoon outside of Renasant Bank in Valley, asking for $1,000 to be set free.

The four officers were following in the footsteps of Chambers County Sheriff Sid Lockhart and Major T.J. Wood, who raised more than $6,000 on Oct. 4 in the same spot.

According to Renasant Bank Branch Manager Nancy Warren-Holland, the officers just made their bail, raising $1,020 on Thursday afternoon.

Weldon said the Valley Police Department was in the cell Thursday in honor of two officers.

“We have two of our employees and families that are breast cancer survivors — Lt. Sandra Crim and Honorary Capt. Kelli Daniel,” he said. “We are doing it in honor of them today.”

Weldon said both officers had other obligations and couldn’t be there Thursday, but he said he felt it was vital for him to be there as chief.

Wood said the Lanett Police Department tries to help out anyway it can.

“If we can come down here and take a few minutes of our time and call friends to help us out for raising money, that is what we will do,” he said. “Any time we can give back a little bit for all the appreciation this area shows us on a daily basis, we try to raise awareness for other issues.”

According to Warren-Holland, all of the proceeds raised in October will go to the Breast Cancer Research Foundation of Alabama.

She said the bank is extremely active when raising money for breast cancer research.

“We love the Valley’s willingness as a small town and small community to support things that affect everybody in our community,” Warren-Holland said. “We all have had people that have died from cancer, and specifically breast cancer, and we need that money to go toward the research to find the cure for it.”

The goal statewide for Renasant Bank is $50,000, with each branch in the state raising money.

Warren-Holland said the Valley branch gets most of its money through the jail stint.

She said the office does host a bake sale and raffles as well.

Warren-Holland said the branch was close to $7,000 as of Thursday.

“That’s what I love about our town because they support everybody,” she said. “If there’s somebody that’s in need, we’re going to support them.”