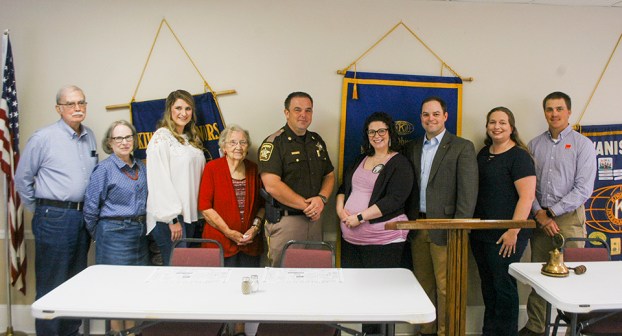 VALLEY — Planning for Chambers County’s 2019 Farm-City Week observance kicked off Wednesday with a luncheon with members of the Kiwanis Club of Valley.

For more than 70 years now, Farm-City Week has been observed nationally on the week leading up to Thanksgiving.

Locally, the Chambers County Farm-City Committee has planned several local events leading up to the week, all designed to underscore the interdependence of those who live on farms with those who live in cities.

Major T.J. Wood of the Chambers County Sheriff’s Office is the chairman of this year’s Farm-City campaign.

“We will have coloring contests in the schools, a children’s tour and an adult tour,” he said. “One of the more interesting stops will be at the Chambers County Career Technical Center. They have a very active agriculture program and a farm right there on campus. I know the kids will really enjoy seeing it.”

This year’s industry tour is being organized by Carrie Royster, the executive director of the Greater Valley Chamber of Commerce. It will take place Thursday, Nov. 14 at Norbord, where members of the tour can see [oriented strand board] being made, and at the Gilbert Tree Farm, where people can see this year’s crop of Christmas trees.

Guest speaker Preston Roberts has a Chambers County connection. He was the local field director for the Alabama Farmers Federation before moving up to his current position as AFA’s director of agricultural legislation. He’s a lobbyist on behalf of the state’s farmers.

He thanked attendees Lillian Slay and Frank and Mary Helen Benford for “just about raising me” when he was in Chambers County.

Roberts said the trend of fewer and fewer farmers having to produce more and more for the American people is continuing.

“According to the Department of Agriculture, less than 2 percent of Americans identify themselves as farmers,” he said. “For the first time ever, next year’s census won’t have a box to check if farming is your occupation. The percentage has gotten that small.”

Roberts said the country needs both farming and industry.

“Sometimes, there’s a breakdown in communication,” he said. “People don’t think about the food supply unless there are reports of GMOs and antibiotics.”

GMOs, or genetically modified organisms, are developed in laboratories and governed by federal regulations.

Lots of people who live in the city, Roberts said, don’t realize the impact agriculture has on the U.S. economy. In Alabama, for example, agriculture is the state’s No. 1 industry, responsible for more than a half-million jobs. Forestry is the top agricultural producer with poultry second. Cattle and soybean production are important as well.

Roberts said some niche products are gaining ground. He cited hemp production as a growing industry in the state. Hemp is from the same family as marijuana but does not have the same level of THC. Even so, some folks are eager to steal it, thinking it’s a drug.

“I know of a 450-acre hemp farm in Madison County,” Roberts said. “They have to have security guards to keep people from stealing it.”

Roberts said a Kiwanis Club is an appropriate place to begin a Farm-City Week campaign.

“In the 1950s, Kiwanis International helped get Farm-City Week started,” he said. “I think you will be having a good event this year. There will be a number of interesting things for people to take part in.”

The Georgia Department of Public Health has issued a public health advisory on the risk of vaping and using e-cigarettes,... read more