Valley native publishes book about growing up in mill town 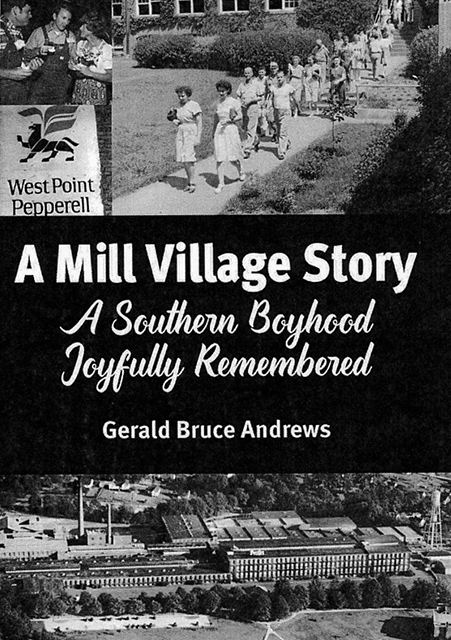 VALLEY — Gerald Andrews has written a book about growing up in a Southern mill village, working in the mill in his youth and the many special people he knew while growing up in Fairfax.

At 3 p.m. EDT on Sunday, Oct. 27, Andrews will be talking about “A Mill Village Story: A Southern Boyhood Joyfully Remembered” at the general membership meeting of the Chattahoochee Valley Historical Society.

Publisher New South Books describes A Mill Village Story as “a record of one man’s upbringing in a place and time that is quickly vanishing. A quintessentially American small town, West Point, Georgia, is a place defined by its local industry — a world-class textile mill run by the WestPoint-Pepperell Corporation — and adherence to traditional Southern values of congeniality, manners and friendliness.”

Just about everyone Andrews knew while growing up in the Fairfax community worked in the mill. He said those years shaped him as a person and prepared him to attend Auburn University and Harvard Business School. He went on to a business career that earned him 85 awards for excellence and creativity in leadership. Early on in his career he earned a reputation as a problem solver. His supervisors could see this even as a teen working in the mill.

“Creativity and kindness set him on the right path,” reads the New South Books review. “Those characteristics were nurtured in him by family members and the mill village community. (He recognized) the importance of every employee, no matter their rank. This compassion for his employees contributed to this success.

In A Mill Village Story, a lifetime of wisdom comes to file, with Andrews peppering his tale with homegrown philosophies he developed from the unique social relationships he enjoyed growing up.”

In the book, Andrews has an interesting personal story about the well-known Heard County fortune teller Mayhayley Lancaster.

Andrews was continuously employed by WestPoint companies from 1954 to 1992. He held 30 positions for the West Point Manufacturing Company, WestPoint Pepperell and WestPoint Stevens and was known by many by the nickname Problem Doctor, the person called on to resolve many different kinds of company problems and challenges.

During his 39-year career, the West Point companies grew to become the largest, most diversified, publicly-owned textile corporation in North America with more than 40 plants, 42,000 employees and retail outlet stores in 23 states. He retired from the company in 1992 while serving as corporate executive vice-president of merchandising in New York City.

Following his retirement from WestPoint Stevens, he became president and COO with Johnston Industries, with corporate offices in New York City. He later became the company CEO and relocated to Columbus. He was with the company for five years before retiring a second time. He was then invited to teach for two years at his alma mater, Auburn University, where he taught seniors, Masters and Ph.D students how to be creative, innovative and inventive.

He later became CEO and board chairman for Accelegrow Technologies, an international agri-science company producing a patented product for increasing the yields of food crops, plants, trees and bio-fuels.

Before settling down in West Point, Gerald and wife Claire had lived in 25 different places. Gerald and Claire have three children and seven grandchildren.