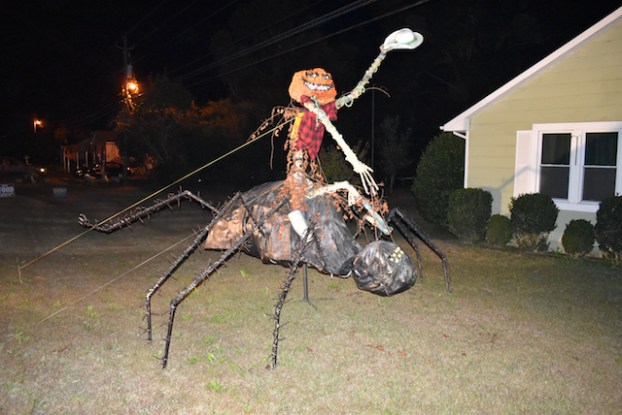 Kelly and Contessa Meacham make attempts to outdo themselves each year with Halloween's decorations. This year’s creation is a salute to the tradition of the Chambers County Sheriff’s Rodeo. - Wayne Clark

VALLEY — The Valley Parks and Recreation Department is planning two events for the upcoming Halloween season.

On Thursday, Oct. 31 there will be a Fall Festival at the Sportsplex.

“We will be having some Halloween fun and games in the pool,” said swim team coach Bobby Poer. “We will be giving away candy, and it should be a lot of fun for everyone. We will have some games that will be ideal in the water.”

A safe alternative to door-to-door trick or treating, the Fall Festival will be taking place outside the main Sportsplex building.

Blount said several local businesses, churches and civic groups have stepped up to commit to having booths on the sidewalk outside the Sportsplex building.

“We still could use some more,” she said. “The more the merrier. When the weather’s good, we always have a good turnout of children in their Halloween costumes accompanied by their parents.”

Blount added there will be two more sessions of the Farmer’s Market this year.

Local farmers will be selling turnip greens, collards, kale and other items from their fall gardens. These two Fridays will be good opportunities to get fresh-grown vegetables for Thanksgiving dinner on Thursday, Nov. 28, Blount said.

The weekend hours will be 10 a.m. until 9 p.m. on Saturdays and 1 p.m. to 5 p.m. on Sundays. Very early this season, a three millionth rider will get on the merry-go-round. The ride will stop briefly while they are recognized and given some prizes. The merry-go-round reached the two million mark in 2004.

“The calendar won’t be good to us this year,” Blount said. “You had better plan ahead to be there this year since there won’t be as many days to ride as there are most years. We always start on the Monday after Thanksgiving, and Thanksgiving comes late this year.”

This year’s Valleywide Christmas Parade will be the evening of Thursday, Dec. 12. It will follow the same route it has in recent years, starting out from the parking lot next to the Cherry Valley Shopping Center in Lanett, going through downtown West Point and making the run along Highway 29 to Valley, where the parade will be disbanding at Walmart.