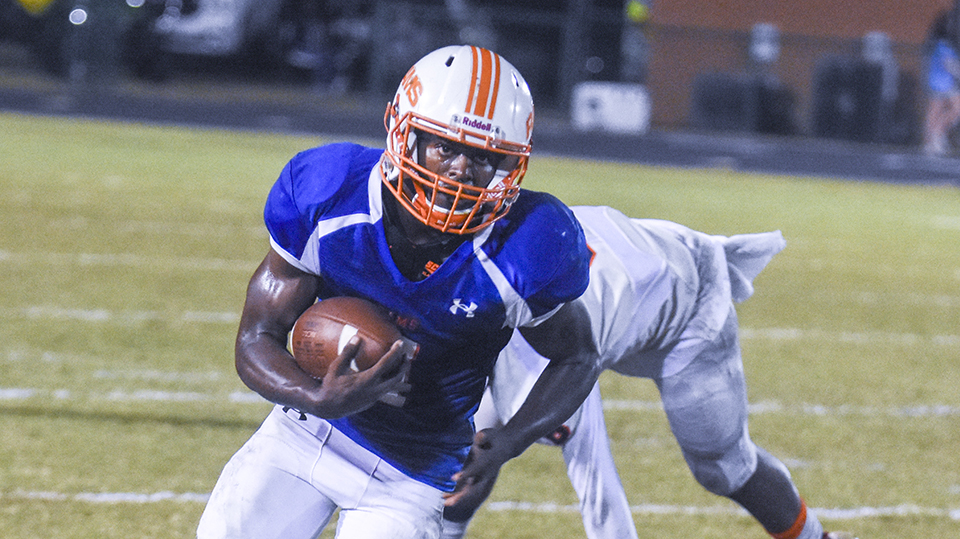 The championship comes in head coach Buster Daniel’s third season leading his alma mater. In his first season, Valley finished 2-8, and last season, the Rams clinched the program’s first trip to the playoffs since 2013.

“I have great kids,” Daniel said. “Coaches do a great job, but we have kids here that play their tails off. We had some adversity tonight, and they never quit. They kept fighting and they overcame it. That’s what it’s all about. We have great kids and they showed it.”

The Rams were led by sophomore running back BJ Baker, who finished the night with 326 on six touchdowns.

“I don’t even know what happened, I was just playing,” Baker said after cracking a big smile. “It’s crazy … five years ago, [this program] couldn’t get [a region championship], but we got one, and that makes me proud.”

On the opening kick off, sophomore athlete Kalen Sherrell returned the ball to the Charles Henderson 45-yard line. On the Rams’ first offensive drive, sophomore quarterback K.D. Hutchinson threw a 43-yard pass to junior Will Kennedy, which set up a two-yard touchdown run by Baker.

Charles Henderson responded later in the first quarter with a 54-yard touchdown run with 3:46 to go in the opening period to tie the game at 7.

Each team stepped up defensively forcing punt-after-punt before Baker broke free for a 50-yard touchdown run with 3:06 remaining in the first half to give the Rams a 14-7 lead.

In the opening drive of the second half, Charles Henderson senior wide receiver Derrick McKinney hauled in a long touchdown pass to tie the game at 14 with 10:58 remaining in the third quarter.

After an interception from Hutchinson giving the ball back to Charles Henderson to begin the next drive at the Rams’ 34-yard line, the visitors capitalized again with a 24-yard touchdown pass with 8:51 remaining in the third quarter. The extra point was blocked by junior Ryan Valencia to keep the score within six points.

A minute later, Baker broke free for another touchdown run from midfield and the Rams regained the lead after converting the extra point with 7:31 to go in the third quarter.

In a short field punt for Charles Henderson, Hutchinson returned the ball to the Charles Henderson 18 yard line. After a pair of penalties from both teams, Valley moved up to the 10-yard line, setting up Baker’s fourth touchdown run on the night on the edge.

“He got some hard yards against a good football team,” Daniel said of Baker. “He’s a special kid when he wants to be. I’m glad we got him and nobody else does.”

With 1:48 to go in the quarter, Baker faked a punt on fourth down and converted the first down on a keeper to continue the drive and help the Rams run down the clock until the start of the fourth quarter.

Baker scored his fifth touchdown of the night on a short run with 8:53 remaining in the game.

Senior defensive lineman Jaden Hamlin blocked four passes on the night, including back-to-back blocks on a Charles Henderson drive in the fourth quarter to force a punt.

Hamlin’s defensive stances set Baker up for his sixth and final touchdown of the night, a 76-yard run with 5:40 to go in the final quarter.

Friday night was also senior night for the Rams, where seniors Hamlin, Daniel Osborne, Kenyion Barnes, Jamarquay Flournoy, Judson Gardner, Conner Hamby and James Hamby were acknowledged on the field before the game.

Osborne has played football in Valley since his days of playing in the recreation program, and he said that Friday night was without a doubt his favorite moment playing for the Rams.

After forecasts predicted Friday night’s game to be played in wet conditions in the rain, Rams Stadium remained dry for most of the night until after the team went to the end zone to take a photo celebrating the victory.

“I think that’s God’s will,” Osborne said of the weather before smiling. “That’s just what it is.”

Valley now heads on the road to face 6A Benjamin Russell next Friday night before returning home to host a first-round game on Nov. 8.