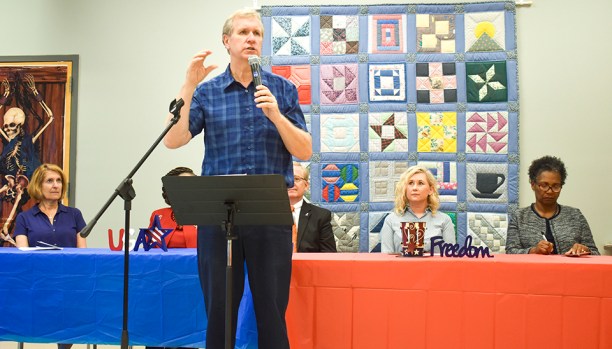 Dan Wooten was the moderator for a five-candidate forum for the West Point City Council Tuesday at the West Point Active Life Center. Behind Wooten, from left to right are Wiky Gladden, Sandra Thronton, Gerald Ledbetter, Keisha Edwards-Coniglio and Deedee Williams. — Photo by Dustin Duncan 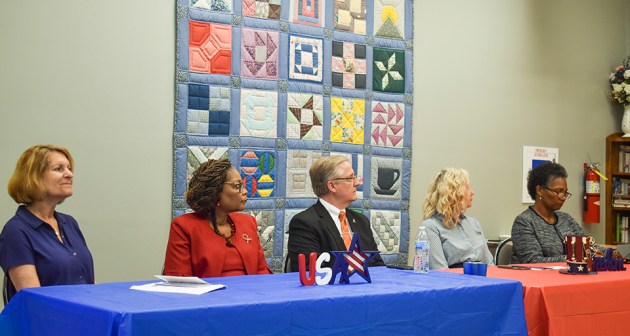 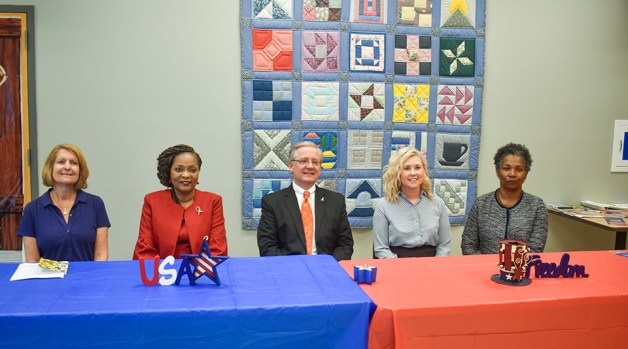 The five candidates for the West Point City Council pose for a photo after Tuesday’s forum at the West Point Active Life Center. From left to right are Wiky Gladden, Sandra Thronton, Gerald Ledbetter, Keisha Edwards-Coniglio and Deedee Williams. — Photo by Dustin Duncan

There are three seats up for grabs on the West Point City Council. Incumbents Gerald Ledbetter, Sandra Thornton and Deedee Williams, are running to keep their seats on the council, while Wiky Gladden and Kesha Edwards-Coniglio are trying to break onto the board.

Each candidate had five minutes to speak and the order was chosen in a random drawing, according to Moderator Dan Wooten.

Councilman Ledbetter has been serving on the West Point City Council since 2012. He said Tuesday it was a great responsibility, and it’s larger than other cities because each councilmember represents all residents.

“Council members are also charged with upholding the values that you and I as a people hold dear while aspiring for a hope of a better tomorrow,” he said. “A core part of those values is trust. We trust that our elected officials will aspire to the very best of each and every individual of our city while knowing that we are never stronger than the weaker of those around us.”

Ledbetter said during his time on council, the city has achieved balanced budgets, lower millage rates and has repurposed older buildings in the community.

He mentioned turning the old InterCall building into the current police station, the old Alabama Supply Building and converting it into a public works building and gaining possession of the old Virginia Cook Daycare building and making it into a meeting center.

Ledbetter said he would also like to change up the way utility bills are paid in West Point. He wants to implement budget billing in West Point, which would take an average of the previous year’s utility bills for a resident and pay the average on the next bill.

Councilwoman Thornton was elected in 2003, and on Tuesday, she said it’s her duty to be involved in the community all the time, not just during the election cycle.

“As a council member, your job is to only govern and vote on city functions,” she said. “But we also must be involved in the community. You can’t just show up at election time and say ‘hey I’m here.’ You need to be part of the community all the time.”

Thornton said she was involved in implementing the first backpack drive in West Point after the mills closed and helped to start the black history program in West Point, which honored and recognized all races.

“I am not that elected official that just starts to get involved, I am involved the whole time during the election,” she said. “You must know your people. You must get involved with the people.”

She said her work isn’t done.

“When you care about the community and genuinely have a passion for the people, you do your best to create a better community and opportunities for everyone.”

Edwards-Coniglio was born and raised in Texas and moved to Georgia eight years ago with her husband. Although they have owned a business in downtown LaGrange, she said she saw something in West Point that needed attention. That was more businesses and a chance to bring the community together.

“I am here to be a little bit younger voice in our community and help bring a community together on a few different things that I think we do need to change,” she said. “I believe we need to love our city, and if everybody has that feeling, then this community will be far greater than it is today.”

Edwards-Coniglio said loving the community means keeping it clean and safe while eating and shopping locally. Additionally, it’s about providing for people in need, whether through donations or encouraging growth in the community.

“We must show concern and be involved when there are issues that arise,” she said.

Edwards-Coniglio and her husband were approved Monday night for a revolving loan request to borrow $170,000 from the city to open an event center on North 4th Avenue in downtown West Point.

Gladden moved to West Point 43 years ago, and when people ask her why she wants to run for the city council, her answer is simple.

“I love West Point,” she said. “And I love the people of West Point.”

She said she’s been in touch with officials at East Alabama Medical Center about providing transportation for cancer patients to get to their treatments.

She said the region is fortunate because of Kia but local business owners are saying there aren’t enough hirable people with a high school diploma who can pass a drug screen.

“These are things we can change,” she said.

Gladden encouraged the growth of local students in the THIC Academy, adding the program teaches students how to get skills and jobs, which helps them stay in school.

Williams was appointed to the city council in April to fill a vacant seat.

She said she’s a native of West Point, and she can bring a historical perspective to the city council.

“Sometimes I reach back so far that most of the people don’t even remember when this or that happened,” Williams said.

“What you get when you elect me to continue on the city council is a person who has that historical perspective,” Williams said. “A West Point native, and person who has knowledge of the community because I have lived here all of my life.”

She said she’s traveled to many cities and has observed different models to running a city, and she would like to bring some of those experiences to West Point.

Additionally, she said she has management experience with Fortune 500 companies, along with analytical skills. She mentioned that she also has a degree in math and business.