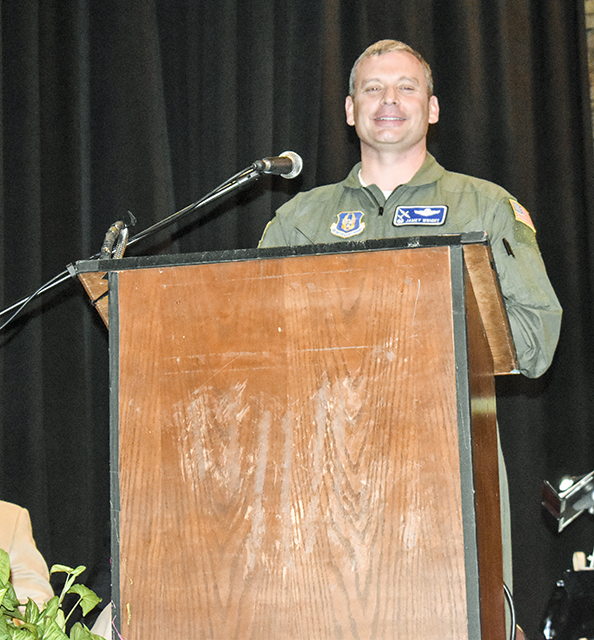 From “The Star-Spangled Banner” to “God Bless America,” the students at LaFayette-Lanier honored veterans throughout the afternoon.

“I think it is a wonderful way for them to put back into their country for something they have received from you veterans,” he said. “Because without you all, we wouldn’t be here.”

The featured speaker was U.S. Air Force Lt. Col. Jamey Wright, who started his comments by thanking all the veterans who came before him.

“I appreciate your service. You paved the way for the rest of us,” he said. “There’s nothing that I could ever do to compare what you guys have been through.”

Wright then turned his attention to the students. He said in today’s culture many children look to professional athletes as modern-day heroes.

“These men and women sitting out here are true American heroes,” he said

Often lost in the shuffle is that a soldier’s spouses and children pay a big price during deployments. He said in 2018 he was gone the entire summer away from his wife and three children, making it his 14th deployment.

“That’s a tough challenge for the spouses and children to continue living life,” Wright said. “I can’t imagine being that spouse out there who is responsible for getting those children up every day, getting them fed and off to school. We owe those people a great deal of respect and appreciation for their part as well.”

Wright grew up in Shawmut and graduated from Valley High School in 1995. He then went off to Auburn University in the Air Force ROTC program before enlisting and traveling to Robins Air Force Base in Georgia.

After four months in basic training, Wright was sent to Columbus, Mississippi for pilot training.

Fast-forward to 2019, he’s finishing up his time in the Air Force reserves and will soon take a job with FEMA to work in emergency preparedness. disaster relief and humanitarian assistance.

Wright told the students Thursday that three core values will make them a better person — integrity, service before self and excellence in all they do.

“Integrity means doing the right thing,” he said. “It’s easy to fall into the temptation of maybe doing something that’s just not quite right. But you know, we all have that inner voice that says, ‘hey, this is not a good idea.’”

Self-service means to put others first.

“We don’t put ourselves first in the Air Force. It’s all about a team effort. You’ve got to put the team before yourself,” Wright said. “I know that can be difficult because we all like to be noticed. We all like to receive praise. However, I encourage you to think about others first.”

Lastly, Wright said if there is anything worth doing, it’s worth doing 100 percent.

“That can be waking up in the morning, making your bed and coming to school and giving your teacher respect,” he said. “You don’t have to be perfect because no one’s perfect. However, you have to be disciplined and always striving for excellence.”

Wright said if the students follow those core values and apply them to life, there’s a big world out there for them to see.

He ended his speech by challenging the students to do things in life.

“The first is to always strive for self-improvement,” Wright said. “We can always learn no matter what.”

Second, he asked the students to make a difference in somebody else’s life.

“There are plenty of opportunities in front of you each and every day,” Wright said. “It can be as simple as holding a door open for somebody at a store or helping a struggling student.”

He asked the students to look for opportunities because they exist and students will most likely be exposed to chances several times a day.