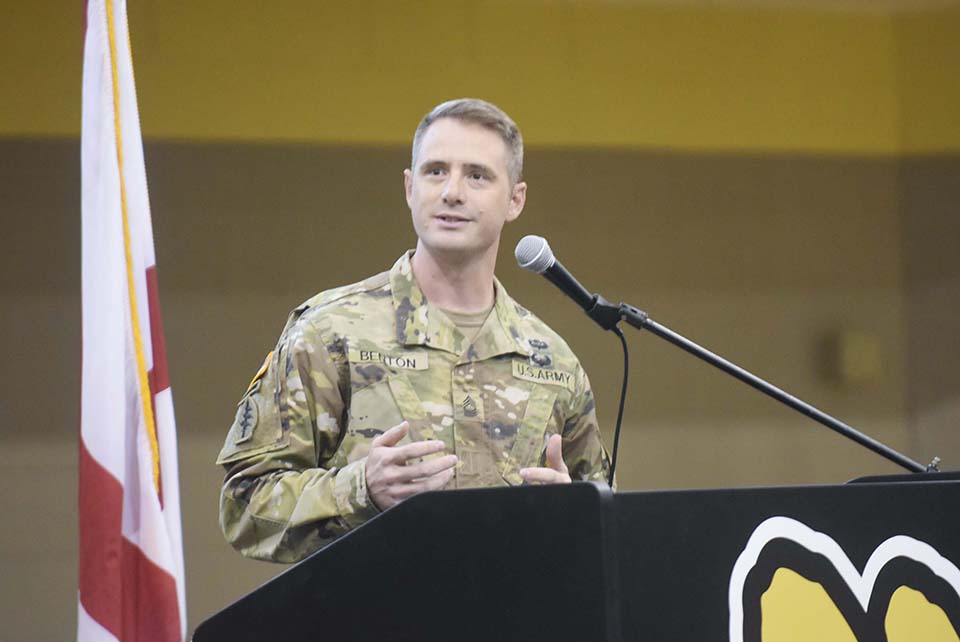 U.S. Sgt. Jeremy Benton shares his story about how a veteran told him to get his life together, which prompted him to join the Army.

BEULAH — The students, faculty and staff of Beulah High School showed off all of their patriotism during a Veterans Day assembly on Thursday afternoon.

“The hospitality of Beulah was extremely warm, extremely welcoming, extremely loving,” Sgt. Jeremy Benton said. “You can tell that they cared about the individuals they had the opportunity to be with.”

“We thank you for sacrificing your lives,” he said.

After the national anthem and pledge of allegiance were performed, Smiths Station native Jonboy Storey played a three-song set with his guitar.

Storey dedicated his second song to the veterans before receiving another large ovation from the Beulah students.

Benton then addressed the crowd as the event’s keynote speaker.

“When I think of Veterans Day, I think of the opportunities the field has been able for me to afford,” he said.

Benton told the audience his story of defying the odds and overcoming a difficult upbringing in life.

His mother was addicted to drugs and she funded her habit by entering the world of prostitution.

No member of his family completed high school.

Benton told the students that he wouldn’t be where he was today if a man in uniform didn’t tell him to get his life together when he was entering young adulthood. He said that joining the service allowed him to pursue his bachelor’s degree and other goals.

He told Beulah’s student body that every day in the service was not easy, but he keeps his focus on the end goal.

“Peace fails when we forget what we stand for,” Benton said during his keynote speech. “We didn’t have to like each other, but we valued each other … being a veteran is a brotherhood and a bond that was formed before we were even formed in the womb.”

At the end of his speech, Benton asked everyone to stand, and he told the audience to look around at one another to remember the end goal.

“Hopefully they will have taken an opportunity to evaluate what they value,” Benton said after the ceremony.

After Benton’s speech, the Beulah High School band performed a pair of patriotic songs and members of the BETA Club handed out American flags to each veteran in attendance.