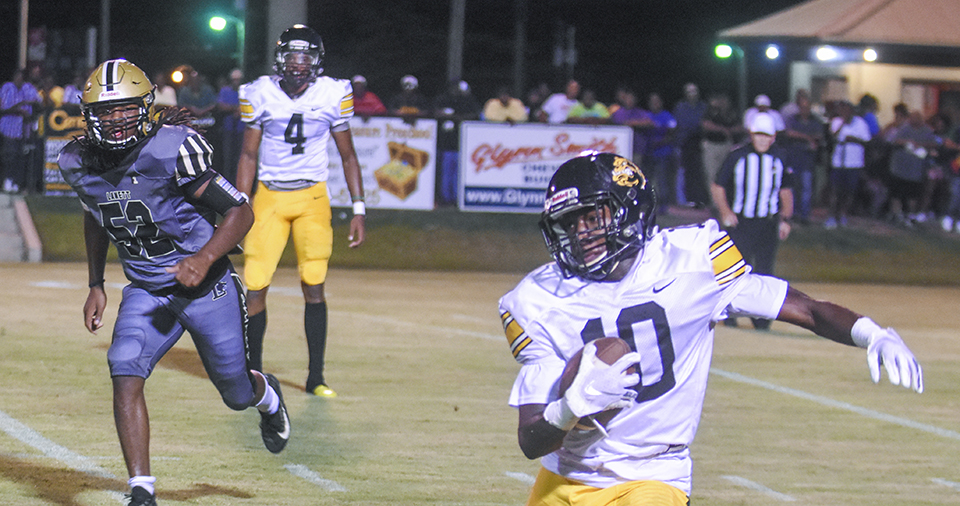 daniel Evans | Times-News senior backfield: LaFayette senior running back KeAndrae Peterson has been one of the Bulldogs’ focal points offensively this season.

LaFAYETTE — For the first time since September, LaFayette (5-4, 5-1) is preparing to play a home game.

“It’s been a minute,” LaFayette head football coach James Lucas said after smiling. “That’s just the luck of the draw sometimes, but we’re going not to try to do what we did against Highland Home last year and lay a 42-3 egg. We’re going to try to get that off of our backs.”

The Highland Home 2018 loss was a second-round matchup for the Bulldogs and the team’s first home game in the playoffs.

“They’re a good team,” Lucas said. “They don’t play the way their record indicates. They play with fundamentals and technique. They have a good coaching staff with Coach [Zachary] Holmes down there. We’re expecting a battle on our hands.”

Lucas said that teams often look at the first round of the playoffs as “the softest week,” but he looks at every week in the postseason as a championship.

“It was battle-testing,” Lucas said of the road trip. “The young guys got an opportunity to play and stepped up. I told them they were the next classification up … they’ve worked all summer, all fall and now it’s time to use them.”

While on the road, Lucas said the Bulldogs found their identity. He said he likes what’s working for the team so far and he doesn’t plan to change much in the near future.

Lucas said LaFayette’s key to success this postseason will be defensive fundamental techniques and each player doing their assignments.

New Brockton has scored 35 or more points four times this season and the team has the reputation of being a balanced offense. New Brockton quarterback Kaden Cupp threw for nearly 1,400 passing yards this season, while running back Kyan Horne rushed for over 1,200 this season, according to The Southeast Sun.

Despite finishing with an overall record just above .500, LaFayette suffered its only region loss by a touchdown and lost at Alabama Christian Academy 14-7 in a matchup where three Bulldog touchdowns were called back.

“I’m glad that we made all of those sputters at the beginning of the season,” Lucas said, “you can start off hot and then at the end start fading off because you think you’re so good. Now, these guys are listening and they understand because it’s like what I told them, ‘if we knew it all, we’d be undefeated.’ By doing that, it’s paid off big dividends for us so far.”