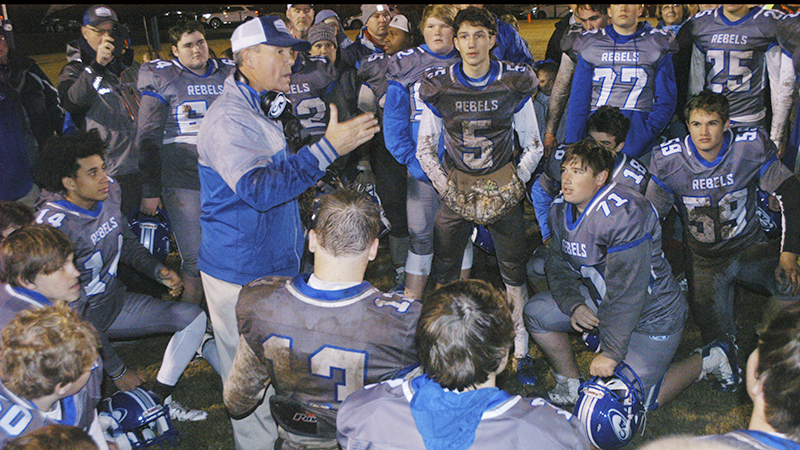 LaFAYETTE — After a loss to big school AISA power Bessemer Academy two weeks ago and a shaky win in a first-round playoff game last week, there were some doubts whether the Chambers Academy Rebels would make it back to Troy for a fifth straight state championship game.

“To all those people who said we were through, and we couldn’t win it this year we’ve got a message for you,” a fired-up Coach Jason Allen told his team following Friday’s 36-13 shellacking of Wilcox Academy at cold, rain-soaked Torbert Field. “Don’t poke the bear. We are going back for a fifth straight year, and we’re out to make it back-to-back championships.”

The Rebels will be playing for a second straight state championship Friday afternoon against Southern, a 17-14 winner over Crenshaw Friday night.

There were some anxious moments when the visitors took an early 7-0 lead, but Chambers stormed back, going 75 yards getting a touchdown on a long pass from junior quarterback Peyton Allen to junior wide receiver Josh Holliday. Senior running back Braxton Allen powered in over left guard for two points on the conversion play to put the Rebels in the lead 8-7 with 10:44 left in the second quarter. They’d never trail after that.

Chambers extended its lead to 14-7 on a big defensive play. On a third-and-short play near the 35, a Wilcox running back coughed up the football. Freshman defensive back Gavin Kight was in the right place at the right time for the Rebels, scooping up the ball and running it back 40 yards to put Chambers up by seven. With 8:42 left before halftime, the Rebels led 14-7.

That score would hold up at halftime, but the Rebels would take complete command in the third quarter. Behind some outstanding leadership from Peyton Allen, they drove the ball 75 yards on their first possession to extend the lead to 22-7. Allen threw his second TD pass of the game, this one to Braxton Allen who was open in the left corner of the end zone. The Rebels had to overcome back-to-back holding penalties at one point to keep the drive going.

The 22-yard TD pass on a third-and-nine play made it 20-7. Braxton Allen added two more points on the conversion by racing around right end and making it across the goal line just inside the pylon. With 9:04 left in the third quarter, the Rebels extended their lead to 22-7.

Chambers held Wilcox to a three-and-out on its next possession and took complete command of the game by driving 80 yards for another score on their next possession. Peyton Allen ran 63 yards off the right side of the line to build the lead to 28-7 at the 6:05 mark of the third quarter. Another conversion run by Braxton Allen pushed the advantage to 23 points, 30-7.

Wilcox had a consolation score on the first play of the fourth quarter to draw to within 30-13. On the conversion attempt, Jake Waldrop and Raphe Daniel teamed up to tackle the Wilcox running back short of the goal line.

As the rain picked up in intensity, the Rebels drove for one more score, taking the ball some 63 yards to make it 36-13. On a third-and-three play from the Wilcox 13, Peyton Allen kept the ball on a running play up the middle, veered to his right and easily made the end zone. With 6:27 left in the game, the final points of the game had been scored.

After stopping Wilcox on their next drive, the Rebels got the ball on a punt and ate up most of the remaining fourth quarter by driving the ball deep in Wilcox territory. The visitors had one more possession with slightly over a minute to go and ran a couple of plays into the line to end the game.

Chambers improved its record to 11-1 on the year with the win.