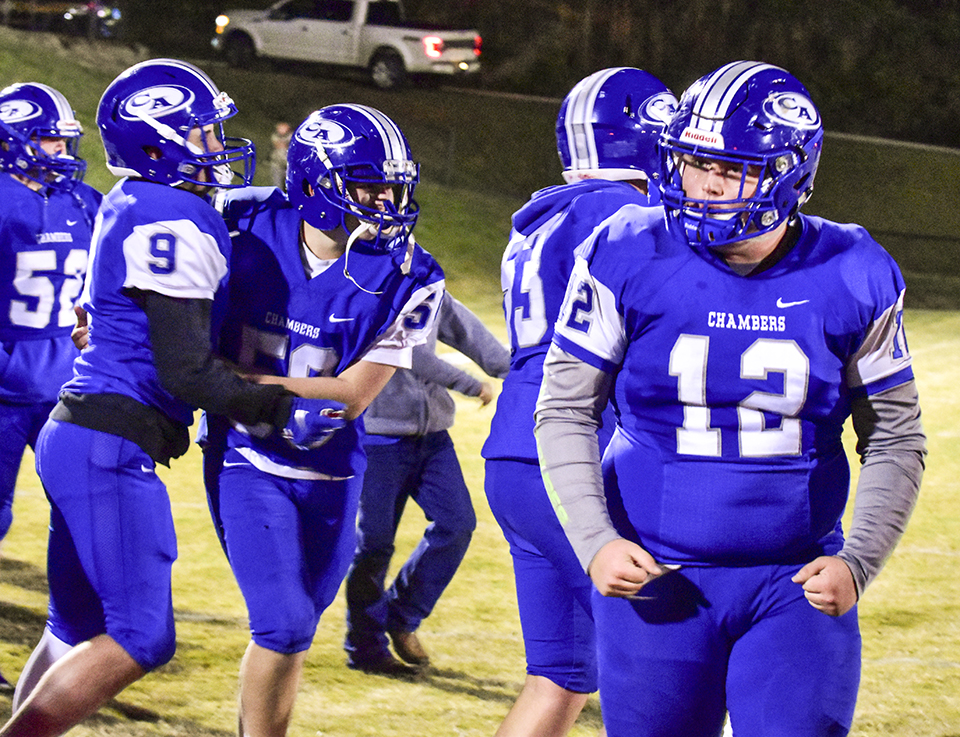 LaFAYETTE —The Chambers Academy Rebels were one minute away from ending their season in the first round of the playoffs.

A split-second decision by junior quarterback Payton Allen was the difference between the start of basketball season and an appearance in the ASIA Class A semifinals.

The Rebels defeated Jackson Academy (4-6, 1-3), 46-39, but were trailing with one minute left to play in the fourth quarter.

The Eagles senior running back Micah Roberts had just scored his fourth touchdown of the night, and he followed it up by throwing a completed pass to put Jackson Academy up by a point with no timeouts for either team.

However, a good kickoff return by Allen to Rebel 40-yard line and the stage was set for Payton Allen. After some trickery with spreading Allen out wide and lining senior wide receiver Caydon Smoot at quarterback, Rebel head coach Jason Allen moved Payton Allen back under center. Payton Allen went on to complete a 15-yard pass to Smoot moving the Rebels to the Eagle 30-yard line, getting out of bounds to stop the clock.

Payton Allen came back to pick up a fourth-and-seven on a quarterback keeper, driving between two Jackson Academy defenders. He then rallied his troops to the line to spike the football with 11.7 seconds left.

The next play was a pass play, according to Coach Allen. But as Payton Allen rolled out to the right side of the field, he couldn’t find an open receiver, so the 6-foot, 4-inch quarterback saw a hole, drove and put Chambers Academy in the semifinals with a touchdown.

“We had routes over there and they were covered up, so I was thinking just get out of bounds and get what I can get,” Payton Allen said. “I saw the opportunity, so I scored.”

Payton Allen admitted after the game he was a bit worried to start the final drive, but he remained cool under pressure and trusted his team.

“I believed in all our guys,” he said. “We were all confident we could score and we went down and did it.”

Chambers Academy survived on a night where they lost three fumbles and gave up four touchdowns on the ground and one through the air.

“I’m really proud of our guys because of the way they fought on a night that we probably got outplayed and outcoached,” Coach Allen said. “Everything seemed to go against us.”

It was an ominous start to the game as senior running back Braxton Allen fumbled on the first possession for the Rebels, which was recovered by the Eagles.

Roberts would later score on a one-yard rushing touchdown shortly after the fumble.

The Rebels seized control quickly with a 58-yard Payton Allen touchdown run, putting Chambers Academy up 8-6. Payton Allen finished with 197 yards on the ground on 15 carries and touchdowns. He also threw for 99 yards on 5-of-11 passing and one touchdown.

The Rebels seemed to be set to cruise to victory when Smoot returned a kickoff 85 yards for a touchdown putting Chambers up 22-12 with two minutes left in the half. But Jackson Academy quickly drove down the field with Roberts, converting a fourth down along the way.

Roberts scored on a 30-yard run, bring the Eagles within four with 59 seconds left in the half. Jackson Academy recovered an onside kick on the next kickoff, leading to a 20-yard run by Roberts with 18 seconds left.

After halftime, the Rebels came out with a renewed focus.

The two teams traded three-and-outs before Payton Allen hit junior wide receiver Josh Holliday for a 45-yard touchdown pass. The Rebels completed the two-point conversion to lead 38-25 at the beginning of the fourth quarter.

On a drive that was helped by a late hit out of bound penalty on third down, junior quarterback Jack Fleming hit senior wide receiver Chase Hamilton for a 20-yard touchdown throw, bring the score to 38-31. The Eagles point-after try sailed wide right.

Payton Allen fumbled on the second play of Chambers’ next possession with 6:58 left in the fourth quarter, recovered by the Eagles at the Rebel 44.

On a third-and-11 play, Hamilton was able to secure a pass for a first down on his back after a Rebel defender deflected it. The Eagles also converted a fourth down with Roberts before scoring on a one-yard run to put Jackson Academy down by one.

Eagles head coach Jacob Webb said there was no doubt he was going for two.

“We knew if we got there, we were going to for two,” he said. “We knew what we could run based on what we saw on film.”

Webb said the final drive just came to not being able to keep Chambers Academy in bounds. However, his team left everything on the field.

“Some time you play the best game of your life and you still come up short and that is what happened tonight,” he said. I have won a lot more games years but I’m a lot more proud of this team than any team I have ever coached.”

Coach Allen knows his team is fortunate to move on in the playoffs but he also knows there is work to be done if he wants to go back to Troy University for a shot at back-to-back championships.

He said he has faith in his team but something needs to reignite the flame to win.

“I have faith our guys can because we have a tremendous football team, but we have to get that fire back in our bellies,” he said. “I don’t know what it was but we were missing something tonight.”