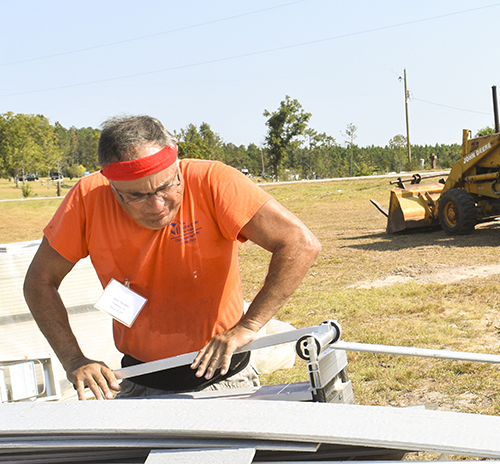 LANETT — At 4:30 p.m. EST this Friday, a ceremony will be taking place in Smiths Station to dedicate the 18th and final home built in Lee County this year by the Chattahoochee Fuller Center Project (CFCP). Construction was sponsored by the East Alabama Community Foundation. Former Opelika Mayor Barbara Patton is its president.

Wendy Johnson, who lost her mobile home in the March 3 tornado, will be living in the new home with her son and eight-year-old granddaughter. She was w0rking at the Marathon gas station on US 280 in Phenix City the day the tornado cut a path across Lee County killing 23 people and leaving scores of others homeless.

“Robin (Pierre) and I are so glad to be back home in Lanett,” said CFCP Executive Director Kim Roberts. “There was a six-month period where we were away from home for all but two weeks. We were on a roller coaster of emotion, seeing both highs and lows. It was hard on us, but I wouldn’t trade anything for it. What an honor it was for God to have chosen us to do this. He could have picked anyone else, but he picked us and we had to depend on Him every day to get us through it. On the bad side, we saw so much sorrow, and on the good side so much joy. On the days the new homes are dedicated you see different kinds of tears, tears of joy. That makes it all worthwhile.”

Going in to 2019, Roberts expected a relatively quiet year for the CFCP. They’d had a very busy year in 2018 building four new homes in the Valley area. The tornado that hit Beauregard changed everything.

“I never dreamed we would go from 42 to 60 CFCP homes this year, but we did,” Roberts said, “and we built them in six-and-a-half months. Lee County was absolutely wonderful to us. Whatever we needed there was somebody to get it for us. At first we had to introduce ourselves everywhere we went. We’d tell people we were Kim and Robin from the Fuller Center and they ask us “Who and from what?” but they’d  catch on fast. It got to the point where people would point to us and say ‘There goes those two ladies who builds all them houses.’ The funny thing about that is we don’t know how to build anything. We just pull together a process where the new homes get built.”

“We have learned a lot by being on all those building sites,” Pierre said. “There were times when we helped put in insulation, painted and put up LP siding.”

“We’ve had such a busy year in 2019,” Roberts said. “Going in we didn’t expect it, but we never know what we will be called on to do from one day to the next. I am glad we were able to help so many people.”

Two of the 18 new homes are conventional CFCP homes. That’s because they were built for families in Beauregard who weren’t tornado survivors. Two of the new homes were stick built and 16 had sets of walls built for them.

“Steve Tramell was our rock. He was a house captain, and he really helped us through it,” Roberts said.

Roberts and Pierre will have two busy days on Friday and Saturday. Friday will be the dedication of the Johnson home in Smiths Station, the event that marks the conclusion of an 18-home build. On Saturday, the Hallmark Channel will be having a Christmas program at Providence Baptist Church in Beauregard. It will be part of a documentary for the Hallmark Drama Channel. It’s scheduled to air on Dec. 10. They will be interviewing Roberts and Pierre for their Christmas special.

“I got so tickled with them the first time they interviewed us,” Roberts said. “I talked with Vanessa while one of their guys had a big camera on his shoulder. ‘You’ve done this kind of work before?’ Vanessa asked me. ‘Yeah’ I told her. ‘Lots of times.’ Their entire crew was great and were with us all week. I will never forget the first time the Hallmark Channel contacted us. I was speaking at a church in Beauregard at the time and picked up their message when I got back in the car. I put it on the speaker so Robin could hear it. We both hollered out loud with excitement, and I had to pull the car over on the side of the road to call them back. When I got them, they asked if it would be okay for them to sponsor three of the builds. I couldn’t say ‘Yes! Yes! Yes!’ fast enough.”

The documentary will be entitled Christmas Joy and will focus on how a community that had experienced such heartbreak from a natural disaster is putting back together the pieces of their shattered lives and enjoying the Christmas season. The Hallmark Channel will be providing an estimated 200 Beauregard families with Christmas trees this year. “They have really put their hearts and their money into Beauregard,” Roberts said.

“We had always built a few homes in the Valley for deserving families in need,” Roberts said. “This was the first time we had ever done disaster. It’s entirely different. So many people are affected, and you meet people who are still dealing with the loss of a family member. We build a house for Tiffany, who lost her parents in the tornado. Tiffany’s in her 30s. She was with her parents in their mobile home when the tornado blew it apart and them with it. When she woke up her dead mother was on top of her and her father wasn’t far away.

The opposite happened to the Meltons. The parents both survived but they lost their six-year-old son A.J.

The Rivera sisters lost their mother that day. The oldest daughter, who is 21, has legally adopted her younger sister, who’s 17.

“In our first build cycle in Beauregard we built a new home for Wayne Robinson, whose sister Maggie had been a nurse at EAMC in Opelika. All of these people have gone through so much. If we can bring some sense of normalcy back to their lives and let them know they are loved it makes everything we do worthwhile.”

“The one bad thing about being in Beauregard is that the cell service is bad,” Roberts said. “A lot of times we had to get in the car and drive to a place where we could talk to people. One good thing about the Legacy Build in late September and early October is that we didn’t get any rain all week. The weather was beautiful, but it was so hot. Some of the Fuller Center volunteers who came in from up north really suffered with it but they were real troopers. They did the job they came here to do and didn’t complain about the heat. It was a very memorable experience for us. I stayed with my stepdad the whole week, and we probably got no more than four or five hours of sleep each night. On one night I dropped down on the couch in my stepdad’s house and went to sleep with one leg off the couch. When I woke up the next morning I was still in that same position. This has definitely the hardest year I’ve ever had with the Fuller Center, but it’s also been the most rewarding. I wouldn’t change anything for the world.”

Roberts and Pierre plan to rest up for the remainder of 2019 but hit the ground running on a new project in 2020.

“We are going to relocate the ReUse Store next door into the old Cohen’s building,” she said. “We will have around 1,000 square feet more in that building, but the main thing is that we won’t have the rooms, walls, doors and hallways we have here. We will have more open space inside, and that will be really good for us.”

Roberts said she is still elated with the success of the ReUse Store.

“When we first opened in April 2014 I can remember asking Bill Scott how in the world were we ever going to fill up the big building we were in,” Roberts said. “Our main concern now is will we have enough space in the new building to store everything we have.”

The store will be closed in January and February while the moving is taking place but should reopen to the public in March.