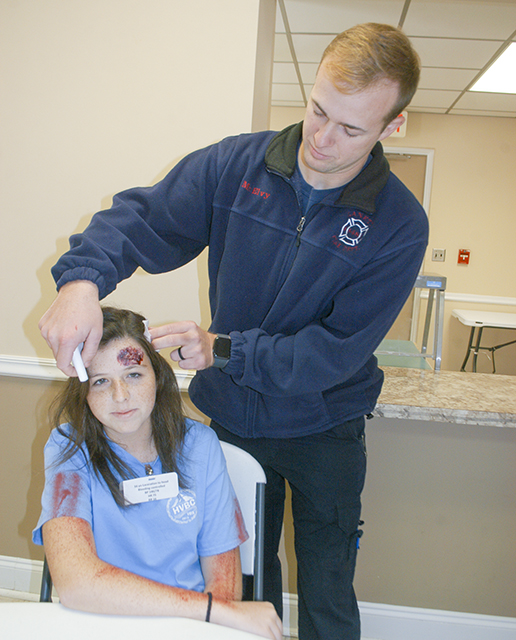 LANETT — Thankfully, an EF 5 tornado didn’t touch down in the Valley on Tuesday but there was a disaster drill to test preparedness in case such an event ever does take place. It was a community wide effort among the local Fire & EMS departments, the Chambers County EMA and the 9-1-1 Center, police departments from Lanett, West Point and Valley, Chattahoochee Hospice, EAMC-Lanier Home Health Services, the Alabama Department of Public Health and EAMC-Lanier Hospital.

Personnel were given the task of responding to a very serious situation where many people could be killed or seriously hurt.

The scenario had a very powerful tornado touching down in the area near Popeye’s/Dunkin’ Donuts and Burger King in Valley, bobbing back up and touching down near the Plant City Methodist Church in Lanett and then touching down a third time near Highland Drive in West Point’s Booker Hills neighborhood.

Everyone taking part knew it was a drill but did what they were supposed to do in an actual emergency.

A total of 17 Valley High seniors taught by Jennifer Williams at Career Tech played the part of injured people. They were treated on the scene by paramedics and then transported by ambulance to a disaster center that was set up at the Jane Farrar Event Center in downtown Lanett. Then, it was to the EAMC-Lanier Emergency Room, where the victims were admitted five or six at a time.

“It’s useful to simulate the reality of a disaster and the influx of injured people into an emergency room,” said Valerie Kambeitz, who’s with the education department at EAMC-Lanier and took part in the drill.

“We do this several times a year at the hospital and at least once a year with all the departments,” Kambeitz added. “Each person has assigned duties to do, and the students wear moulage make-up to simulate injuries. We appreciate the City of Lanett allowing us to use the event center as ground zero for today’s drill.”