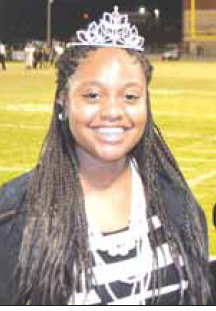 A 2016 Beulah High School graduate died in a car crash Monday afternoon, according to a news release Tuesday morning.

In a press release, the Lee County Coroner’s Office confirmed the death of 21-year-old Diamond Anatasia Wright. Wright was involved in a two-vehicle accident on U.S. Highway 280 East in Smiths Station on Friday and died on Monday at Piedmont Regional Hospital in Columbus, according to the press release.

Wright was the 2015 homecoming queen at Beulah High School.

The condition of Wright’s son, who was a passenger during the accident, is unknown, but he is expected to recover. Her son was airlifted to an Atlanta hospital, according to the press release.

The preliminary investigation indicates that Wright “may have pulled into the path of a truck and was struck in the side.”

Many in the Beulah community said Diamond was a great student.

“Diamond was a delight to have in class,” said Sue Larkin, Beulah High School senior English teacher. “She had an infectious smile that lit up a room. She was a very hard worker and had a genuinely caring personality. She was the 2015-16 homecoming queen, and that honor was well-deserved.”

Beulah High School counselor Veronica Jefferson also reflected on her time with Wright in a statement. She said that the former Beulah student “helped everyone she could.”

“She had positive quotes for all who would listen and was well beyond her years in wisdom,” Jefferson wrote. “Strength doesn’t come from what you can do, it comes from overcoming the things you once thought you couldn’t. There was nothing that Diamond couldn’t do. She was a confident young woman who encouraged those around her.”

The Alabama State Troopers of the Alabama Law Enforcement Agency are in charge of the accident investigation, and it remains under investigation by the troopers and the Lee County Coroner’s Office, according to the press release.

UPDATE: Wright’s family has posted a GoFundMe link to help pay or Wright’s funeral and her son’s rehabilitation costs.