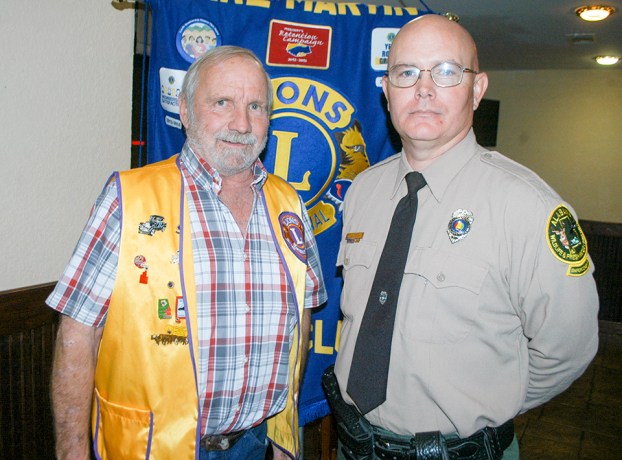 Chambers County Game Warden John Davidson, right, was the guest speaker at Monday’s meeting of the Valley Lions Club. He talked about the state’s new bait law and a decline he’s seen in the quail and deer populations. To the left is Lions Club President Phillip Sparks. — Photo by Wayne Clark

VALLEY — Alabama has a new hunting regulation regarding baiting for game, and Chambers County game warden John Davidson discussed it at length in the Monday meeting of the Valley Lions Club.

“This has been coming for some time,” he said. “Celebrities like Hank Williams Jr. and Randy Owen had been seeking it along with many hunters throughout the state.”

The new law applies to deer, turkey and wild pigs. It does not apply to other animals such as squirrels, rabbits, ducks and doves.

“It’s very simple,” Davidson said. “If you have the license, you can bait them any way you want to.”

“Hunting while baited seems strange now given that it had been illegal to do it for so long,” Davidson said. “You can now hunt over a pile of corn. I know that deer corn must be selling really well right now. If you are under 16, over 65 or are hunting on land you own, you do not have to have a hunting license, but you do have to have a bait license if you are hunting while baiting.”

Davidson has been a game warden for 15 years and has 19 years previous experience as a law enforcement officer.

Davidson said that hunting isn’t as popular as it once was, especially with younger people.

“It peaked in the early 1970s,” he said. “This was before we had video games and smartphones.”

He said that quail hunting isn’t what it once was.

“How can we bring it back?” he asked. “It may take something like the Great Depression when people had to hunt for their food.”

At one time, coveys of quail might include up to 35 birds.

“I see a lot of them,” Davidson said. “But rarely do you see a covey with more than five to seven birds. We just don’t have the quail population we once did. I think a factor in this is that they don’t have the places to hide they once did, and there are predators out there like coyotes that we used to not have.”

Davidson believes the local deer population is on the decline as well.

Davidson said that some species of animals can be hunted all year. These tend to be notorious pests such as coyotes, armadillos, groundhogs and beaver. Raptors such as eagles, osprey, hawks and vultures are federally protected and cannot be hunted.

Beavers can be especially destructive to landowners.

“I’ve seen people lose stands of pine trees because of beavers,” Davidson said. “They can dam up an area and flood a large number of trees. Those trees will die, and the beavers will bring them down.”

Beaver pelts aren’t worth what they once were.

“It’s just not worth fooling with,” Davidson said. “Pelts for bobcats and otters are well-priced.”

In addition to deer and quail being down, game wardens have noticed something else in decline. People aren’t growing marijuana like they once did.

“We used to stumble on them a lot more than we do now,” Davidson said. “We don’t see nearly as many meth labs either.”

“It’s a $35 fee, and a subcontractor does it for us,” he said. “You have to be 16 to get a full license. You have to show your hunter education card, and your number can be cross-referenced.”

Despite stiff fines for doing it, some people still hunt at night.

“There’s a $2,000 fine for doing it,” Davidson said. “You can lose your license for two years and your vehicle can be confiscated. The fines are doubled for a second offense.”

At one time, guns were confiscated. The problem with that is that the state was collecting an enormous number of guns.

“We had a pile of them,” Davidson said. “We stored them in a warehouse in the 1990s. We had a pile of them 30 feet wide and 3 feet deep. Fines are the main deterrent now. Out-of-state licenses really help the budget. In the 1950s and 1960s, most night hunting was for rabbits.  Rabbits were everywhere at that time. That was before we had coyotes.”

The cities of Valley and Lanett got some good news this week in the form of Community Development Block Grants.... read more