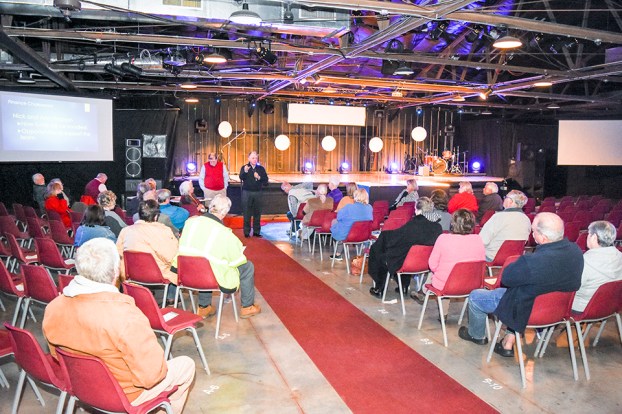 A group of about 40 people gathered at ThreeLife Church in LaGrange to discuss the elimination of a school property tax for seniors within the Troup County School System. -- Photo by Daniel Evans

Organizers said around 200 people showed up to the first meeting at 4 p.m. and around 40 were at the 6 p.m. meeting. The meeting was the first organized opportunity for the senior group to meet to discuss their common goal — to convince the Troup County School Board to eliminate property taxes for senior citizens.

For the idea to become a reality, the school board will need to pass a resolution, the Georgia Legislature will need to approve a referendum and Troup County voters will have to approve it.

“It’s going to be a process, and it’s not going to be quick. And our goal is what we have told the board and what we told Dr. Shumate and what we tell everybody we meet with,” said organizer Randy Atkins. “We really don’t care who does this, as long as it gets done.”

Every speaker noted that the group believes there is enough “wasteful spending” in the school system’s $118 million budget to eliminate senior property taxes without cutting teachers or hurting students in the classroom.

“My wife is a teacher. Don’t harm the teachers and don’t harm the children,” Atkins said. “But there is enough money out there in this budget that is fat, wasteful spending, we feel like it can be better, and we’re going to provide some oversight and some thoughts about that.”

The last two school board work sessions have been dominated by discussion on the property taxes, with dozens of senior citizens speaking to make their case.

The school board said it will hire an outside firm to study Census data. At the last work session, Chairman Kirk Hancock called the issue “complex,” and said the board plans to hold question and answer sessions on the tax in the future.

The tax relief group has incorporated, which President Marcelene New said was necessary to show everyone that they are doing things the right way.

Atkins said the group hopes the current school board will make a change. However, if not, they’ll support candidates who agree with their mission in the 2020 election when four school board seats will be up for grabs.

“If the present school board will do it, great, that’s our win,” Atkins said. “If that school board won’t do it, there’s four seats coming up for election next year. We will try our best to flip those four seats and put somebody in there who will get it done.”

Atkins said they will determine if the school board is on their side based on how much movement there is over the next few months.

“The thing that we’re going to measure to determine are they with us or not is if they start to schedule the referendum,” Atkins said.

“We’ve only got a short time to do that. The legislature meets the first part of the year, so we’ve got to get the pressure on them to do that. That’s our number one goal.”

The group is also pledging not to support another SPLOST vote until seniors get tax relief.

E-SPLOST is used for infrastructure improvements in the school system, such as building new multipurpose athletic centers at LaGrange and Troup High.

“What we’re talking about in tax relief is probably somewhere between $3.5 million and $4 million,” Atkins said. “When you talk about SPLOST, you’re probably talking $15 million or above, so we got their attention. I don’t know about you, but I’d swap $15 million for $4 million all day long.”

The tax relief group will meet again on Thursday night at Loving Hands Adult Day Care located at 206 Union Street. The Troup County School Board will meet for its work session on Monday.

Qualifying for the March 3, 2020, primary election has ended, and there are three races in Chambers County with multiple... read more