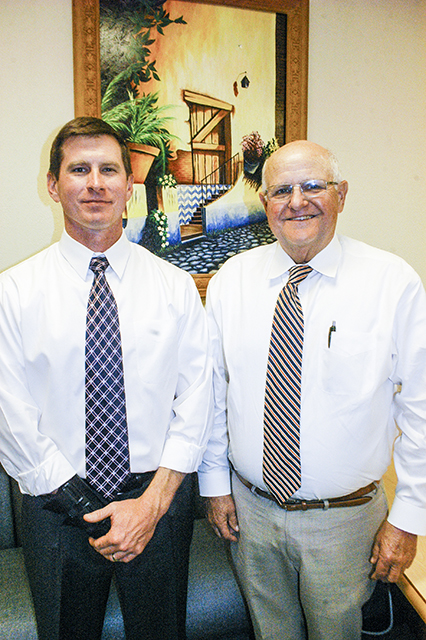 Chambers County Engineer Josh Harvill (left) spoke to members of the Valley Lions Club Monday evening about the new Rebuild Alabama program and the benefits it will have for Chambers County. To the right is Chambers County Commissioner Sam Bradford, the program chairman. — Photo by Wayne Clark

Harvill has been making appearances throughout the state with Sonny Brasfield, executive director of the Alabama County Commissioners Association, and Elmore County Engineer Ricky Beyer to discuss how the new gas tax affects local communities. They spoke in Huntsville on Tuesday and will speak in Hoover on Wednesday and Montgomery on Thursday. They will be meeting with local officials in Mobile and Tuscaloosa next week.

“He will be doing lots of traveling over the next week or so telling the rest of the state what’s been going on in Chambers County,” said Commissioner Sam Bradford in introducing him to fellow Lions Club members.

The new gas tax went into effect across the state in September. Studies show that the average motorist will pay an extra $55 at the pump over a year’s time due to this. It was the first gasoline tax increase in Alabama since 1992. The state and county highway departments were being hard pressed to keep up with basic needs because of this. Even with the increase, most states have gas taxes much higher than Alabama. California’s gas tax is three times higher than what Alabama charges, and it’s two times higher in New York state. The full tax will be levied in over the next three years, going up 10 cents on the gallon altogether.

Two-thirds of the new revenue will be going to the state highway department, 25 percent will be divvied up between the county departments with eight percent being shared by the cities.

Harvill commended Gov. Kay Ivey for the leadership she had shown in getting the gas tax approved. He said it was something that was long overdue and that previous administrations had been reluctant to seek any kind of tax increase, regardless of the need.

Harvill also discussed local road projects. The most significant one going on right now is at the intersection of Phillips and Cusseta roads in the Huguley community. The goal is to add some new turn lanes at the intersection’s traffic signal. This would help reduce traffic delays around Huguley Elementary School in the mornings and afternoons. This is a $4.57 million project and involves the relocation of underground utilities. Harvill said that road work will be taking place there this coming summer.

“This is our largest project, and almost half of it involves relocating utilities,” Harvill said.

Another major project for the county involves some off-ramp improvements at Exit 70 on I-85 at Cusseta. It did not get approved for funding this year, but will be sought on a priority basis for next year. State officials are looking at having roundabouts at three intersections — two off the interstate and a third one at the entrance of the industrial park.

A local road project that will start very soon will be some major work for Valley Industrial Drive.

“It will start next week,” Harvill said. “It needs to be rebuilt from the base up.”

This will be a City of Valley project, and Harvill has served as a consultant for it.

Harvill will also offer a helping hand for Valley and Lanett on two major projects. Valley is looking for some major improvements for Combs Road, where a new housing subdivision is planned. If all goes well, there could be several hundred new homes built there in the coming years. Lanett is looking to have better access to its greatly expanded airport. The runway is going from around 3,100 feet to more than a mile long, long enough to land commercial jets. A new terminal is in the early stages of development.

Harvill commends State Rep. Debbie Wood for understanding the county’s infrastructure needs and doing what she can to help this.

“She has been fighting hard for us, and we appreciate that,” Harvill said.

Prior to the gas tax, Alabama highway engineers faced the dilemma of trying to get as much out of a dollar that has depreciated some 38 percent since 1992. Generally accepted standards hold that concrete bridges need to be replaced every 50 years and roads should be paved every 15 years.

“That’s what you shoot for, but we’d need another $3 million a year in Chambers County to do that,” Harvill said.

On average, Alabama county highway departments spend 41 percent of their revenue on labor, 37 percent on maintenance and operations, and 19 percent on equipment and facilities. Chambers County hovers at or slightly above or below each one of those categories. Rebuild Alabama gas tax funds will be spent on asphalt and concrete. “There’s transparency on this,” Harvill said. “We have to report on how we are spending it. It’s on our website, and you can see it at any time. You can see what’s being done in every county under Rebuild Alabama. You can see what projects are being bid and when the money is being spent.”

Harvill said the Rebuild Alabama program will make a big difference throughout the state.

“Right now, we are attempting to get organized and to have a uniform plan,” he said. “We will be accountable with the extra money we have been given.”

The Chambers County Highway Department is attempting to replace a wooden bridge over the Norfolk Southern railroad tracks near Waverly. The bridge was built with creosote timbers in the 1940s. The bridge caught fire and burned four years ago and has been closed since then, forcing nearby residents to detour around it.

Harvill said a new, much better concrete bridge could be going in at that site. The railroad would provide $200,000 for construction costs and the county providing around $70,000 in materials.

“There will be a new bridge there that will be much better than the old one,” Harvill said.

There’s a trend among Alabama county highway departments to do what’s known as pavement preservations.

“We did this on the State Line Road,” he said. “We resurfaced the portion of the road from the state line to the marina. We did the rest of the road with pavement preservation. It should provide good service for the next seven or eight years at a much lower cost per mile.”

The repaved south end, which passes the access road to West Point Dam, cost around $160,000 a mile; the northern half that was the preservation project, cost an estimated $50,000 a mile.The road now is a much smoother ride from one end to the other. Prior to the recent work, the State Line Road was showing signs of clear deterioration with lots of potholes. “It was dangerous,” Harvill said. “There were places where you could easily hydroplane in bad weather conditions.”

TALKING BETTER ROADS — Chambers County Engineer Josh Harvill (left) spoke to members of the Valley Lions Club Monday evening about the new Rebuild Alabama program and the benefits it will have for Chambers County. He also talked about some recent projects such as the resurfacing of the State Line Road and the work going on near Huguley School. Exit 70 off I-85 at Cusseta could be getting some work next year. At right is Commissioner Sam Bradford, the program chairman.

LaFAYETTE — Two schools in the Chambers County School District have appeared on the state’s failing school list for 2019.... read more