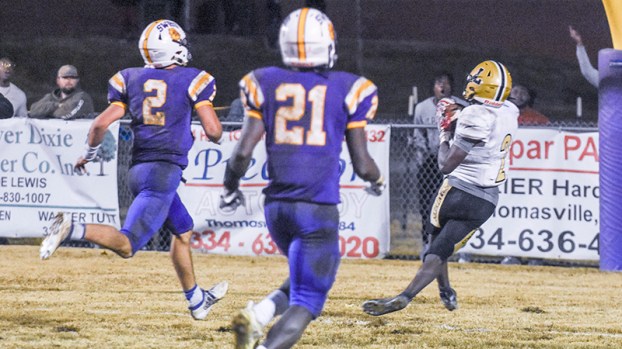 Lanett wide receiver Larontavious Hurston catches the game winning touchdown pass during Lanett’s 42-35 win over Sweet Water in Friday night’s 1A state semifinal game. The score came with under a minute left and was Hurston’s third touchdown of the game. --Daniel Evans

The Lanett Panthers are back in the state championship game, thanks to some last-second heroics from quarterback Kristian Story and wide receiver Larontavious Hurston.

With less than 45 seconds left in the game, Lanett and Sweet Water were tied.

Story looked right and fired to Hurston, who had blown by his man — a constant throughout the night. Hurston caught the pass in stride, going untouched into the end zone to put the Panthers ahead with 38 seconds left.

Sweet Water tried to answer, but after a couple of failed pass plays, Story intercepted a pass and slid to the ground as time expired, sending Lanett back to the championship game for the second time in three years and giving the Panthers the victory in a back-and-forth game that saw five touchdowns scored in the fourth quarter.

“He’s a really fast receiver, and I saw the defender still back peddling. I knew he couldn’t flip his hips and run with [Hurston], so I put it where only my guy could get it,” Story said.

Hurston was the difference maker for the Panthers. The senior, who had broken his foot earlier in the year, was finally 100 percent, and he showed it.

Overall, Hurston finished with six catches for 177 yards and three touchdowns. Story threw for 282 yards and five touchdowns, adding to his all-time records for passing yards and total yards.

“He has been peaking for about the last month,” Lanett coach Clifford Story said of Hurston. “Just his effort, hard work and commitment to the weight room in the offseason.”

At the start of the game, it took just one play for the Panthers to reach the end zone. Story lofted a deep pass to Hurston, who came back to make the catch. He then outran every Bulldog defender for a 79-yard touchdown.

After getting stonewalled for most of the remaining first half, the two linked up again, as Story ran to the left but fired to the right, where Hurston had once again beaten his man, giving Lanett a 14-13 advantage heading into the half.

After scoring on its opening drive of the second half, Lanett was once again needing a spark early in the fourth quarter, as it trailed by a touchdown with 10:20 left in the game.

Ka’Darius Zackery answered the call with a 73-yard kick return, tying the game, just 11 seconds after Sweet Water took its only lead of the second half.

Story was 7 of 11 for 129 yards and three touchdowns in the second half.

“We saw they were going to give us the underneath, so we started taking what they were giving us,” Clifford Story said.

Jaquarius Houston and Travaunta Abner each finished with a touchdown reception.

Defensively, the Panthers struggled to slow down Sweet Water’s Jaland Lewis-Horton for most of the game. The sophomore running back tallied 116 yards and a touchdown in the first three quarters of the game. He found the end zone two times in the fourth quarter, but he gained only 28 yards in the final quarter.

“We just tried to rally to him,” Kristian said. “We tried to pick up on the rhythm of the way they were running the ball … He’s a big back and he runs hard.”

The Panthers will play Mars Hill Bible, the defending state champions, in the championship on Thursday at 4 p.m. ET at Auburn’s Jordan-Hare Stadium.

While Lanett was setting records and cruising to its twelfth win on the season Friday night, the Sweet Water Bulldogs... read more