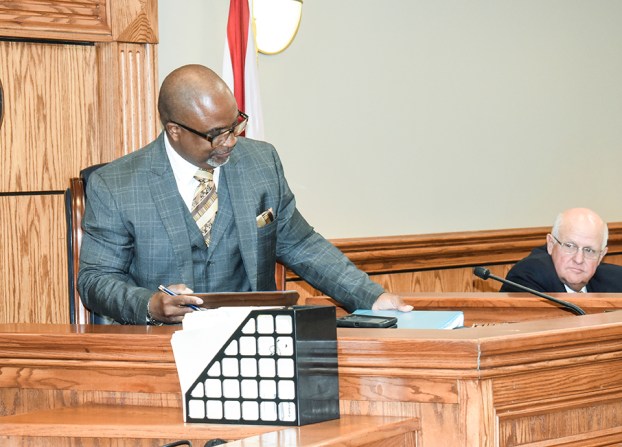 The Chambers County Commission voted District 2 Commissioner Doug Jones as the new chairman of the of commission Monday night. — Photo by Dustin Duncan

District 2 Commissioner Doug Jones was unanimously voted in by his peers to take over as chairman for District 5 Commissioner David Eastridge.

Eastridge had served as chairman for the past year.

In a majority vote, each commissioner submitted their votes to Chambers County Attorney Skip McCoy in a public election, taking about a minute to make their selection.

Jones, who is still in his first term after being elected in 2016, said he’s proud the commission has faith in him to represent the commission.

“I’m excited about it, and I think it is an honor that they trust me enough to lead them,” he said. “When we go out, I am so to speak the spokesperson for us and for them to feel I am able to do it is an honor.”

Eastridge said the commission has a “gentleman’s agreement” to rotate the chairperson’s seat each year. However, there has to be an election held in open session.

“I feel very comfortable with any of these people being chairman,” he said, adding it’s a good thing for the commission to have different people in charge. “It’s good for us to rotate it around.”

Also at Monday’s meeting, the commission talked about a public hearing on the horizon for 3:30 p.m. on Monday, Nov. 18 about the closure of the Milltown, Penton and Stroud voting precincts.

“People have been voting in these places for over 100 years,” McCoy said. “So, this is a radical change.”

According McCoy, the commission, along with a committee, has been studying how to merge several precincts into a better location with more efficient facilities to accommodate all voters.

“It will be an upgrade,” he said. “The people will get a better facility, and it will be more spacious with accessibility.”

The current proposal will have all voters in the Penton area vote in Union Hill. Milltown voters will be divided at Chikasanoxee Creek. McCoy said all the voters south of the creek would go to Union Hill. Those north of the creek will vote in Mount Olive, which is in north Chambers County, but east of Union Hill.

“The commission and committee have been very diligent to create clear lines of demarcation for voters to make it easy for them to identify where they are voting,” McCoy said.

He said the commission would host public hearings in November to allow the public to ask questions about where the lines will be placed.

McCoy said moving the precincts has nothing to do with the number of voters at each site.

He said it’s more about upgrading the facilities.

Chambers County Chairman David Eastridge said the accommodations at the polling places that will be closed aren’t welcoming for all voters.

“The time has come with the handicapped accessibility issues, running water, toilets, good conditions for people to vote in, we have come to this point to where we needed to do something,” he said.

VALLEY — A total of 54 artists and craftsmen participated in this past weekend’s 19th annual Autumn Leaves Art Show... read more