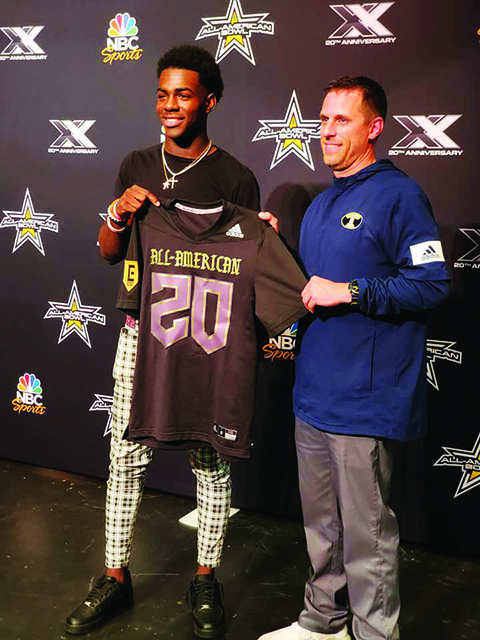 Kobe Hudson, an Auburn commit, received his All-American jersey. He will play in the All-American bowl in December.

Troup High’s Kobe Hudson, who has put the finishing touches on a spectacular high-school career, received his Army All-American jersey during a ceremony in the school’s auditorium on Friday afternoon.

Hudson, along with other top high-school players in the country, will play in the All-American game on Jan. 4 in Texas.

During Friday’s ceremony, Hudson was joined by his Troup teammates and coaches, as well as the supportive members of his family who have been with him every step of the way.

“It’s an honor to come from my high school and be named one of the top players in the nation,” Hudson said. “I just want to thank everybody from Troup nation, my teammates. If it wasn’t for them, I wouldn’t have this opportunity.”

When Hudson arrived at Troup he was a wide receiver, and he had a touchdown catch in his first high-school game.

Hudson made such an impact as a freshman that he was one of the first high-school players in the country to receive an invitation to play in the All-American game.

“I’m looking forward to it,” Hudson said. “I got invited in the ninth grade, so it’s been a long time. It’s a thrill to be one of the top players in the nation.”

Hudson put up big numbers as a receiver as a freshman and sophomore, with quarterback Montez Crowe getting him the ball.

After Crowe graduated there was an opening at quarterback, and Hudson stepped in and had a remarkable junior season while leading Troup to the state semifinals.

Hudson enjoyed another successful season as a senior, helping Troup reach the state playoffs for the fourth consecutive year.

For Hudson, being able to share the ride with his teammates has been the most enjoyable part of the past four years.

“I don’t really thing about it with games we won or games we lost,” Hudson said. “I think about the friendships and the bonds I’ve made. From where I came as a freshman, it’s just a brotherhood I’ll never forget.”

Tanner Glisson, Troup’s head coach for the past five years, appreciates everything Hudson has done for the program.

Hudson is part of a senior class that won 35 games, with 12 of them coming during the memorable 2018 season.

While Hudson has made plenty of spectacular plays over the years, one stands out for Glisson.

In 2016 the Tigers were coming off a 1-9 season, and they were looking to show they could compete with the elite teams on their schedule.

In the sixth game of that season, Troup went on the road and beat Sandy Creek, with Hudson returning an interception for a touchdown.

The Tigers won that game 28-20 on the way to an eight-win season and a second-place finish in Region 5-AAAA.

“I remember against Sandy Creek, which was probably the turning point for our whole program, he had a pick six as a freshman,” Glisson said. “That was the play that turned Troup’s program around, so I owe him a lot.”

Glisson added that “he and I go at it all the time because both of us are real intense competitors, but we both love each other. He knows I love him, and I think he loves me back. We both just want to win so bad, and we compete like crazy on the football field. We owe a lot of where we are to him and the other guys obviously, but he’s a big part of it.”

Hudson is grateful for what he’s learned over the years from his teammates, including defensive lineman King Mwikuta, who is a freshman at the University of Alabama.

“When they were here, they wouldn’t settle for nothing but my best,” Hudson said. “They pushed me to be the best player I could be every day in practice. You lose, the next week you come back in and work harder.”

Hudson has verbally committed to Auburn, and he’s eager to test himself against the best college-football players in the country.

“I’m ready,” Hudson said. “That’s one of the reasons I chose Auburn. I know I’ll be going against the top players in the nation every week.”