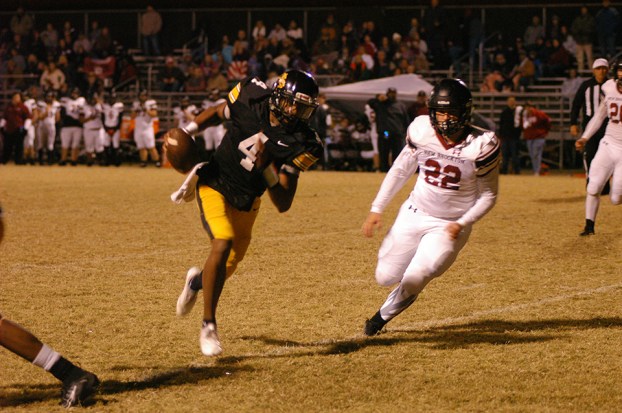 Wayne Clark | Times-News BIG NIGHT FOR NO. 4: Senior quarterback Jordan Walker had a big night for the LaFayette Bulldogs in Friday’s game with New Brockton. He had two touchdown runs, a two-point conversion run and a TD pass to Ja’Mariae Daniel in LaFayette’s 27-7 win.

LaFAYETTE — It was a bad start but a great finish for the LaFayette Bulldogs in Friday’s first-round playoff game versus New Brockton. It was a cold night with a sparse crowd on hand when the Bulldogs found themselves in a 7-0 hole of their own making. They botched the opening kickoff return, stepping out of bounds and starting on their own 13. Then they got a penalty for too many men on the field, pushing them back to the eight and first and 15. Then the unthinkable happened. They fumbled a handoff into the end zone with the Gamecocks recovering for a gift touchdown. The game was only 12 seconds old, but the Bulldogs were down 7-0. Worse, it looked like they just didn’t have their heads in the game.

All bad starts don’t result in bad finishes. The Bulldogs got things turned around quickly and went on to a 27-7 win.

New Brockton’s early score would be the only time they’d ever get close to the end zone. The big difference in the game was speed. LaFayette had it, and New Brockton didn’t. The Bulldogs killed them on the corners. Senior quarterback Jordan Walker had a great game, running for two touchdowns, a two-point conversion and firing a TD pass to Ja’Mariae Daniel.

With New Brockton leading 7-0, it was starting to look like a game where the Bulldogs just couldn’t do anything right., They started their second possession on the 28 but immediately started to march backward again. They got another penalty for illegal participation, and on first and 15 from the 23, the center snap sailed over the quarterback’s head with LaFayette recovering on the 16. “There’s too much confusion out there, guys!” some fan yelled from the crowd.

He was absolutely right, but on the next play, Walker had one of the biggest plays of the game, racing around left end all the way to the New Brockton 31. It was obvious from that one play that New Brockton couldn’t match LaFayette’s speed on the corner and they would probably be in for a long night.

LaFayette got their first score of the game on a 17-yard run by KeAndrae Peterson around the right end. They missed the extra point, but with 8:15 showing in the first quarter, it was a new ballgame with LaFayette d0wn by one, 7-6.

The Bulldogs began to seize control early in the second quarter. They drove the ball 67 yards, gashing the Gamecocks with wide plays around both ends. One of the best plays was an option pitch from Walker to Peterson just when it looked like the quarterback would be tackled at the line for no gain. Instead, the Bulldogs had a big gain on the play. LaFayette continued pounding the ball on running plays but took the lead for good on a 17-yard pass from Walker to Daniel right down the middle. The lead went to 14-7 on the conversion when Walker sped around right end for two points. With 7:06 left before halftime, LaFayette finally had things going their way.

It looked as if they’d make it 21-7 before intermission, but they ran out of time deep in New Brockton territory.

In one of the best-executed plays of the game, LaFayette pulled off an onside kick to start the second half. Jadarious Crim fell on the ball at the New Brockton 40. The unexpected play electrified the LaFayette sideline, and the offense took to the field sensing the kill. Runs by Webb, Daniel and Peterson got them close. Walker capped off the drive by rounding right end and scoring on a four-yard run. With 7:44 left in the quarter, the Bulldog lead had grown to 21-7.

Another big play by Crim set up LaFayette’s final TD drive. In the final minute of the third quarter, he intercepted a pass deep in Gamecock territory and returned it to the 25. A pass from Walker to Vinay Singh got the drive started and back-to-back runs by Peterson advanced the ball to the four. From there, Walker rounded left end and found the end zone, making it 27-7 with 11:27 left in the game.

In the game’s waning minutes, New Brockton drive to the LaFayette 32 before some incomplete passes and a big sack by Singh and Antavious Woody put them in a fourth and 24 situation. Their final offensive play of the game was an incomplete pass hurled way out of bounds. The Bulldogs took over and ran out the clock.

The win improves LaFayette’s season record to 6-4, clinching a winning season. Next week they will advance to a second-round game with Ariton, who defeated Chickasaw 40-19 Friday night.