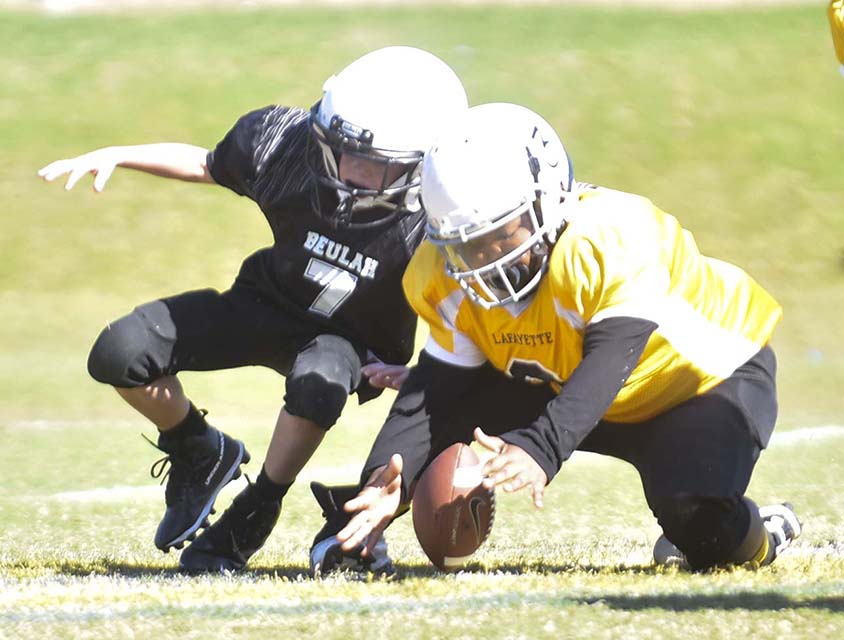 BEAUREGARD — The LaFayette five and six-year-old football team (5-0) advanced to the championship game after defeating Beulah (1-4) 28-6 this past Saturday at Beauregard High School.

“I’m proud of the kids,” LaFayette coach Demetrius Rampey said. “My kids came out and showed out. They played great, I told them that we were either going to win or go home. We won, so now we’re heading to the championship game.”

With 5:42 to go in the first quarter, LaFayette Jordan Rampey ran in for a touchdown and the Bulldogs went up 8-0 after converting the two-point attempt.

“We told him at the beginning of the season that he has to control everything,” Coach Rampey said of Jordan. “He’s done that so far, and I hope he can continue that in the championship game.”

In the first play of the second quarter, KD Heard scored a touchdown to give LaFayette a 14-0 lead.

“We use him for his speed,” Coach Rampey said of Heard. “We tell him every time he touches the ball, we’re looking for him to get in the end zone, and nine times out of 10, he’s going to do that.”

After LaFayette scored again later in the quarter, Jordan laid out a big hit on a Beulah opponent before halftime.

“Practice,” Heard said of how LaFayette learned how to tackle. “You have to get in your spot and do what the coach tells you to do.”

Heard scored another touchdown with 2:18 to go in the third quarter, with Jordan converting the two-point attempt to give LaFayette a 28-0 lead.

“I feel good because I like winning and I like going to the championship,” Jordan said. “That makes me feel awesome.”

Beulah quarterback Dean Dubose then broke free for a big touchdown run for the final score of the day.

“We started slow, this is the first year a lot of these kids are playing football, but as the season went on, we got stronger,” Beulah recreation director Jimmy Traylor said. “I’m proud of my boys. I can’t ask for more than what they gave us and I hope they enjoyed playing.”

Traylor later said that the program looks to come back next fall and have a better result at the end of the season. He also expressed his gratitude to the program’s supporters.

“I’d like to thank all the parents for coming out,” Traylor said. “Spending all of their Saturdays watching their kids play football. Go Bobcats.”

LaFayette’s championship game is scheduled to kick off at noon on Nov. 9 at Ladonia in Phenix City.