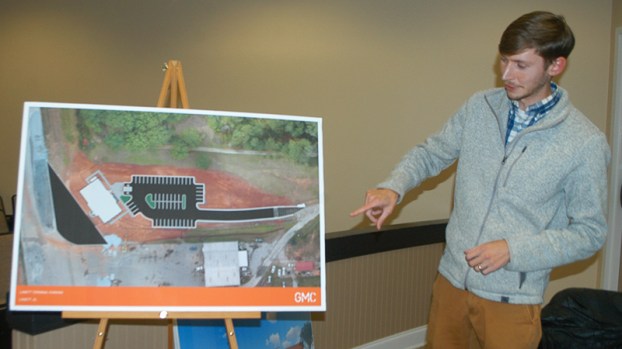 Russell said that a bid opening would be taking place at city hall at 11 a.m. this Friday for the new terminal. He said that eight contractors have expressed interest in building the 5,400-square-foot terminal. He said that Chris Clark Paving & Grading had been preparing the site since late September and were running ahead of schedule on its early January completion date.

“Everything is moving quickly,” Russell said. “The bid process should take several weeks. The council could act on it sometime in December. We’d like to talk about this again with the council next month.”

“It seems like something new is happening in Lanett every time I come here,” Clark said, referring to the airport project and Tractor Supply.

“City officials and Valerie Gray need to be training others. You all do it the right way. I’m sure that many communities who don’t have AMEA as a partner would love to be one. We have had the same rates since 2012 and don’t expect any increases at least until 2025, and we may be lowering our rates at that time.”

Clark said Lanett’s new solar research project would be going online in the near future. The 50-kilowatt project cost approximately $85,000 to build on a one-acre section of the former Lanett Bleachery & Dye Works site.

“You don’t see these projects that often in the South,” Clark said. “From these sites, we will be getting energy dollars that could have come from (non-renewable) sources such as coal, nuclear, or natural gas and the site will pay for itself in the long term.”

Clark said that once the site is up and running it will be an ideal destination for field trips for local schools and to have children thinking about the value of renewable energy. He commended the city on having done a fantastic job of cleaning up the mill site since it gained ownership of the property earlier this year.

“A year ago, it looked like a World War II bomb site with all that broken brick and concrete. The job you have done in cleaning up the site has changed the way people view the town. We think it’s a great location for one of our solar test sites.”

Clark said that the AMEA likes to locate them in highly visible sites in their 11-member towns.

The one in Luverne, for example, is just off US 331 on one of the main routes to gulf coast beaches and the one in Foley is off Alabama 59 on the way to Gulf Shores and Orange Beach.

The Lanett site will be the ninth one to be built. The final ones will be going up in Piedmont and Fairhope. Other member entities with solar projects online include LaFayette, Opelika, Alexander City, Dothan, Sylacauga, Tuskegee and Riviera Utilities.

“The Lanett site is nearing completion,” he said. “We have 160 panels and the racking up. We’ve been putting gravel on the site and will soon be putting up the fencing to surround it. We are anticipating a ribbon cutting sometime around Dec. 10.”

The AMEA has invested approximately $1 million in these 11 projects.

Mayor Kyle McCoy thanked David DeLee and the men of the city’s Electric Department for starting to get the Christmas lights up on the utility poles.

“We should have them all up by the end of the week,” Delee said.

McCoy added that the city’s annual tree lighting program would be taking place at 6 p.m. EST on Monday, Dec. 2. The city tree will once again be in Veterans Park, and the program will be taking place on the W.O. Lance playground. There will be food, hot chocolate, live entertainment, jumpers for the kids, some special recognitions and a good time to be had by all.

LANETT — Thankfully, an EF 5 tornado didn’t touch down in the Valley on Tuesday but there was a disaster... read more