Lanett Head Coach Clifford Story and his son, Kristian make history together on the football field 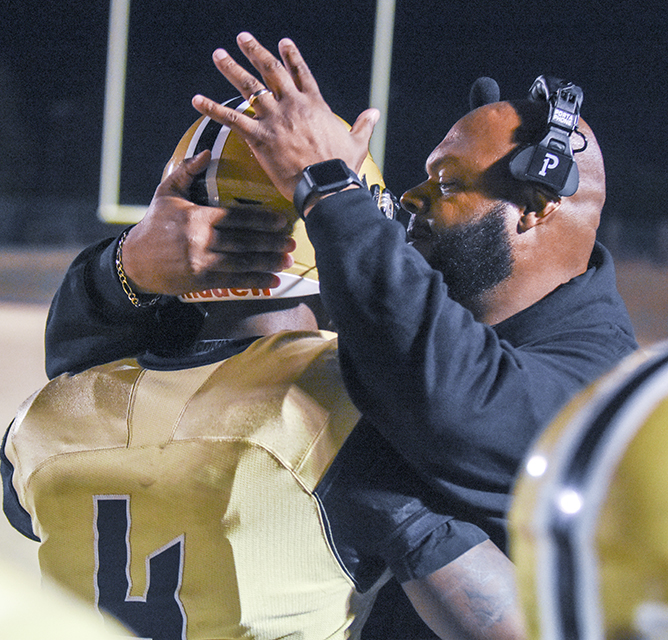 LANETT — On his fourth completion on Friday night, Lanett quarterback Kristian Story launched a pass to Larontavious Hurston to the far sideline. Hurston caught the ball on the five, spun to his right and trotted into the end zone.

The touchdown was Story’s 162 career touchdown, breaking the state record held by current Auburn University quarterback Bo Nix. Story pounded his chest, pointed to the sky and celebrated with his brother Caden Story before trotting to the sideline, where he met his father.

“I was trying to keep focused, but my inside was balling,” Lanett coach Clifford Story said. “I almost teared up, but I knew I had to hold it back because there was a lot of football left to be played. As a father, you are so proud of your son.”

Even though the first record was set, both Storys knew they had to finish the game and advance to the next round. A video posted by WTVM on Twitter showed Clifford talking to Kristian after the record-breaking touchdown.

“You deserve it. You deserve everything you get,” Clifford said. “Now, let’s dominate and finish the game. All that doesn’t mean anything if we don’t finish.”

After the touchdown, the senior said he relaxed and was able to play his game. Twenty seconds into the final quarter, he broke Nix’s offensive yards record with a 10-yard run.

Clifford didn’t know the second record had fallen until it was announced close to the end of the game. When he found out Kristian broke it with basically an entire quarter to play, he could only say one phrase: “wow, just wow.”

Kristian finished the game with six touchdowns in Lanett’s 42-21 win against Isabella.

The bond between a coach and their seniors is strong, as they’ve seen the athlete grow from a young teenager to an adult ready to enter the world, either in college or the workforce. That bond is even stronger for the Storys.

Clifford has been the head coach at Lanett for 11 years, so Kristian was always around football. He would tag along with Clifford when he would go to practice. He jumped in drills, threw balls with coaches and when he was old enough he lifted weights. Even as a young child, Kristian would climb into his father’s lap and watch film, asking questions about what he saw.

“It’s been inbred in him since birth,” Clifford said. “I didn’t expect it to go like this.”

Few high school students like to spend their Saturday’s studying, but if film on the next Panthers opponent isn’t uploaded in time, Kristian will wake his father up asking about it.

“I give a lot of it to being a coach’s son, and just seeing how much they prep, and how important it is to them,” Kristian said.

When Kristian had surgery to repair his torn labrum soon Lanett’s 2018-19 basketball season ended, he wanted to start practicing right away. His father shut that idea down quickly.

“They just told me I had to take it slow and to not rushing anything,” Kristian said.Clifford has been there every chapter of Kristian’s story, as the senior — and the rest of the Panthers — prepare to play at Sweet Water in the semifinals of the AHSAA’s class 1A playoffs on Friday.