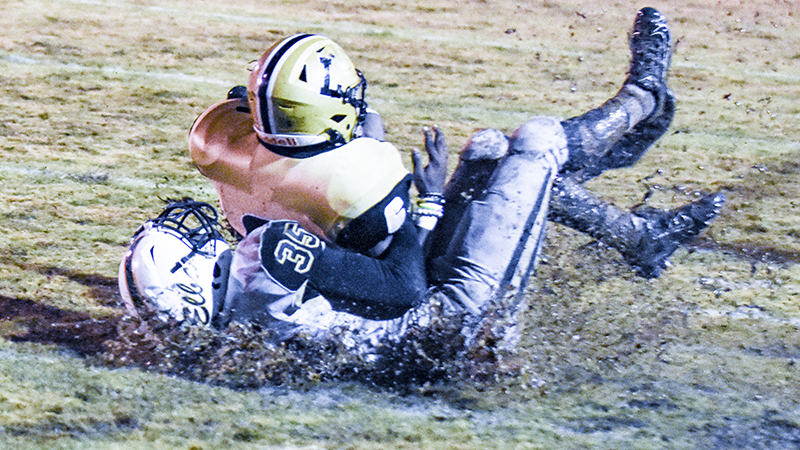 An Elba defensive player tackles Lanett’s Austin Moody during the first half of Friday’s playoff game. The field at Lanett took on a lot of water, creating a muddy playing field. Friday night’s quarterfinal game against Isabella has been moved to Ram Stadium in Valley due to Lanett’s field conditions. --File Photo

The rain was coming down so hard on Friday that Lanett Coach Clifford Story made a halftime uniform change as his team went from its gold jerseys with black pants to an all-black look.

Lanett destroyed Elba by 38, but it also had a problem moving forward: the Panthers’ field wasn’t in playing shape for their upcoming playoff game against Isabella.

Due to the field conditions, Story was forced to call an audible and moved the game from Lanett to the Valley Sportsplex.

“[Lanett’s field] just isn’t playable,” Story said. “Injuries happen in football, but you can do whatever you can on your end to prevent [them].”

“It has a few soft spots, but nothing like ours,” Story said.

Story started the process by reaching out to the Alabama High School Athletic Association. He was told both schools needed to agree on the move. He then talked to Isabella coach Tate Leonard, who agreed to the move.

Both principals then had to email the AHSAA to show the move was approved.

Story’s next step was to reach out to everyone involved behind the scenes at the Lanett games.

“The city of Lanett has been awesome,” Story said. “They’re going to help us get a lot of stuff down there and help us to be ready to play.”

This will be the second time Lanett has played at the Valley Sportsplex this season. It won the first game 25-21, although Valley was the home game that time.

Even though the field is less than six miles from the school, things aren’t the same. Players can’t just walk from their own locker room to the field; they have to drive there. Every spot on the field isn’t recognizable like it is at home.

“You just have the feel for the field. You know where the cuts need to be made, you know where the divots are,” Story said. “It’s just like at home. You can walk through it with your eyes closed. As much time as we spend on it, we just know it.”

Story was told to make the field his home field for the length of the game, and that is his plan.

“We’re going to have that mindset,” Story said. “