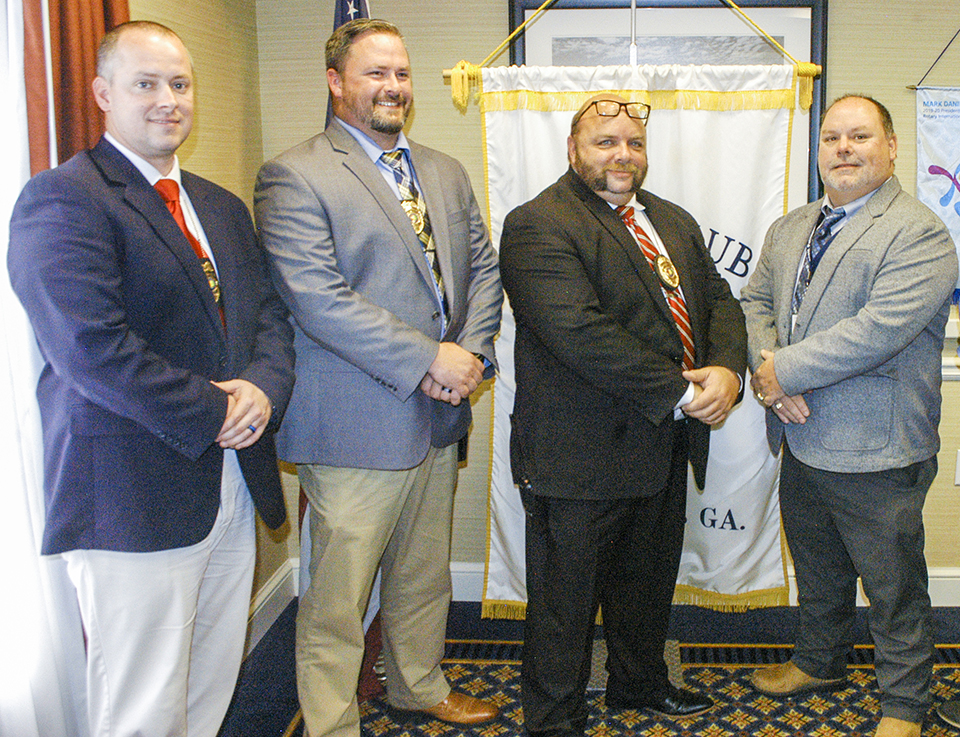 LANETT — Members of the West Point Rotary Club heard a report on the Lanett Police Department at their meeting Thursday.

“An important key in how a city can grow is the safety of its citizens,” said Gator Kincaid, the program chairman, in introducing them. “The Lanett Police Department is one good group of guys. They are as good out of uniform as they are when on duty. I am proud to have them here today to talk about what they do.”

Chief Wood has been in law enforcement since 1993. He was with the Valley Police Department a few years before coming to Lanett.

He has held every supervisory position with LPD since he’s been there and has also been involved with the Chambers County Drug Task Force.

“Our drug task force has been the top unit in the state since 2011,” Wood said. “They have built upon what we started. Drug-related arrests peaked at around 400 a year when I was with them. That’s gone up to around 750. So much crime — burglaries, theft, robberies — are in some way related to illegal drugs.”

The Lanett department has been restructured in recent years.

“The two people I have with me today are the most competent, dependable people you could have,” Wood said. “They have made a big difference for Lanett. Josh Mitchell is a goal-driven, straight-forward, no nonsense kind of guy … He keeps our patrol shifts working in harmony. We’ve been able to expand the number of officers to five on each shift. Having less than that is simply not enough. We are the busiest city in Chambers County. We have as much daily activity as Valley and LaFayette put together.”

Wood says that drug-related crimes have been increasing in recent years.

“That’s just the nature of the beast,” he said.

New trends with the department include having more female officers on the street and more in the way of public education.

“We have one female officer on the road, and we’ll have another one in January,” Wood said. “Lt. Patrick McCullough has been meeting with church groups to offer safety tips in dealing with dangerous situations. Our kids aren’t as safe as they once were. People need to think about the kinds of pictures they put on social media. If there’s a picture of a girl in a cheerleader outfit, everyone knows where she goes to school and if you put a picture of her standing in front of her house, they know where she lives.”

Wood introduced Commander Mitchell to speak to the club.

“I’ve been with Lanett since 2007, and I would like to retire here,” Mitchell said. “I’ve been with investigations since 2013. It has helped a lot that we have been able to add more detectives in recent years.”

Mitchell is certified in active shooter training and offers advice for local businesses, churches and schools.

He’s knowledgeable with the ALICE program. That stands for Alert, Lockdown, Inform, Counter and Evacuate. Mitchell said the ALICE program can give people a better chance of survival if they are approached by an active shooter while at a place of business, at church or at school.

“You can’t say it won’t happen,” Mitchell said. “The ALICE program gives you advice on what to do if it happens to you. We have had training programs twice at Letica, at Lanett High and at The Valley Times-News. We will definitely give you tools that will help you in an active shooter situation. The days of locking the door and hiding just won’t do it anymore.”

Casner offered tips on how to keep from being a victim of theft during the Christmas shopping season.

“Beware of online scams,” he said. “Make sure you are dealing with reputable companies. Don’t give your credit card information to just anyone. Be careful with your receipts. If you order packages, it might be best for you to ship them to a store where you can pick them up. Last year was horrible for people having packages taken when delivered. We called them doorstep pirates. It’s best for you to make arrangements to pick up packages at a store.”

Casner said people need to be aware there may be people watching them while they are leaving the store.

“They watch you with all that stuff,” he said. “They can follow you home. They can see those packages in the back seat of your car. They will break a window if they can get anything of value that’s back there. Be aware of your surroundings when shopping. If you see anything suspicious, report it. It could be nothing, but then again you could stop someone from being mugged.”

Also, it’s not a good idea to put those empty boxes by the curb. It’s just not smart to let people know you just got a 65-inch TV for Christmas. They may be paying you a visit when you’re not home.

“Don’t let strangers know you have neat stuff,” Casner said. “Cut those boxes up and put them in black trash bags.”