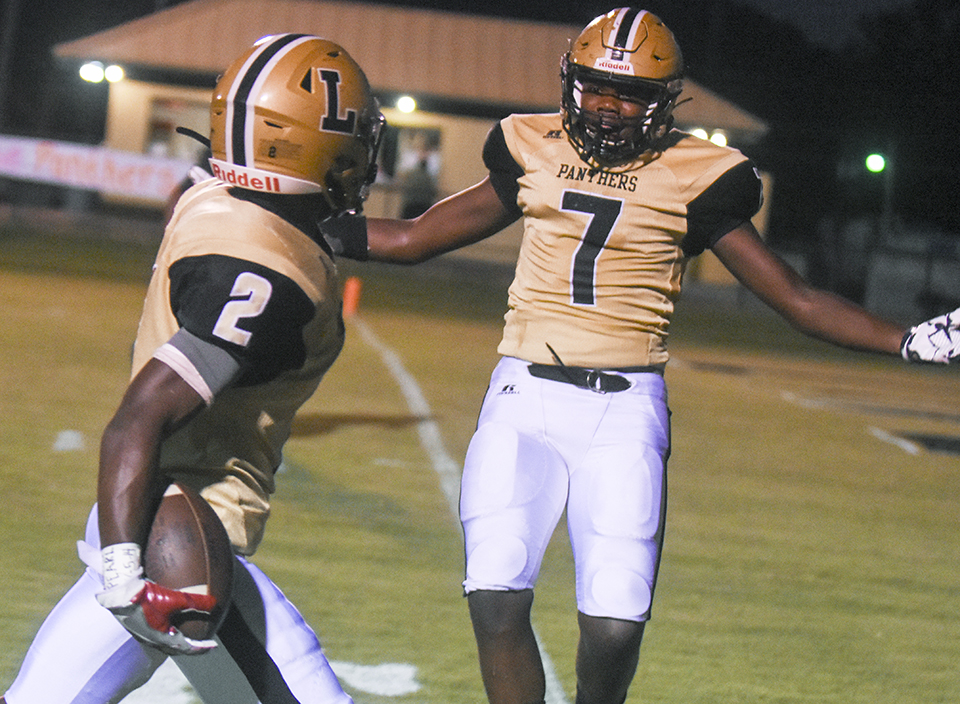 daniel Evans | Times-News panther nation: Lanett junior Trey Abner, No. 7, celebrates with Tae Hurston, No. 2, after a play this season.

LANETT — The 1A No. 2-ranked Lanett Panthers (9-0, 6-0) enter the postseason eyeing a second state championship in three years. The journey begins this Friday, as the team hosts Keith (6-4, 3-3).

“We’re focusing on a really good Keith team,” Lanett head football coach Clifford Story, Jr. said. “They’re very athletic, they have some big guys across the front, their quarterback is athletic, their running back is athletic, it’s going to be a very hard-fought game. We just have to take care of Lanett. We can’t make mistakes, we can’t have turnovers and shoot ourselves in the foot as far as ‘unfocused penalties’ I call them. If we just handle Lanett and do what we’re supposed to do, I think we’ll be fine.”

The Panthers averaged six penalties a game in the regular season, Coach Story said, a number that he would like to cut down on in the playoffs.

“We thrive off of defense,” Coach Story said. “That’s my specialty, I put a lot into defense, I have a great staff that prepares the guys every Friday night. The guys fly around to the ball all week and sometimes we have to scale back because sometimes the guys want to get physical and they just want to hit things.”

Compared to the Panthers’ 2017 defense, Story said this season’s defense is faster. The 2017 roster, that went 15-0 and won the 2A state championship, had players who were more physical, he said.

Lanett’s defensive line features senior B.J. Smith and Eric McCants, who recently received an invitation to play in the All America Classic. The lineman who has probably turned most heads this season, however, is sophomore defensive end Caden Story.

Caden is six-foot-three, 242-pounds, and he’s projected to be about six-foot-six, six-foot-seven, according to Coach Story.

Growing up, he was raised to be a quarterback like his older brothers Tre and Kristian, but Coach Story said that while the offense will still include him at the position in certain packages, his focus moving forward will be on the defensive side of the ball. Caden received his first offer this past summer from the University of Maryland.

“Caden has the chance to be a five-star defensive player,” Coach Story said of his youngest son. “I’m pleased with how he’s matured from the Valley game to now. He’s stepped up and made some big plays when they needed to be made, and I’m happy for him.”

Kristian Story, the four-star senior University of Alabama commit, needs 11 more total touchdowns to tie Bo Nix’s career state record. With a run to the state championship game, Kristian will get his chance to reach the milestone with five more playoff games. Kristian currently has 152 total touchdowns, 105 passing, 39 rushing and eight receiving. He played wide receiver as an eighth-grader and freshman while his older brother, Tre, was Lanett’s quarterback.