Lanett’s defense dominates Elba; Story within one of TD record 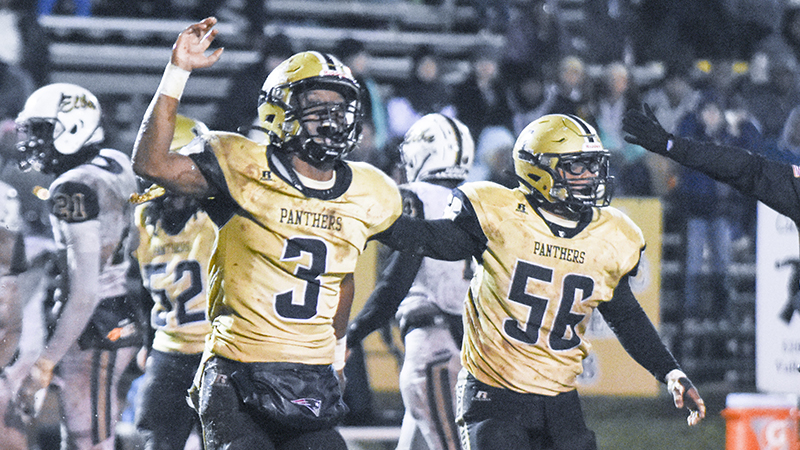 LANETT — Lanett technically allowed its first points since September, but everything else went the Panthers way in a 44-6 thrashing of the Elba Tigers.

Lanett’s Travaunta Abner scored two touchdowns in 15 seconds to give the Panthers a 29-0 second-quarter lead, putting Friday’s class 1A playoff game out of reach. Panthers’ quarterback Kristian Story scored five total touchdowns — four rushing and one passing — to get within one of the state’s all-time touchdown record. Current Auburn quarterback Bo Nix holds the record with 161 touchdowns.

“I knew that the field conditions were going to be bad, so we just tried to make sure that we took care of the ball,” said Lanett Head Coach Clifford Story. “We got a couple in there real early, changed the momentum of the game that we just kept it going. It was a total team effort.”

“I could tell we had the momentum on our side,” Clifford Story said.

“You know, it is a game of momentum, and if the momentum shifts, it makes a big difference. So we’ve just got to make sure that that you know, we use this going forward.”

The third fumble by the Tigers set up Lanett to pile on another TD, but Story was intercepted on fourth and goal and the Tigers’ Collin Harrison ran it back the other way for a 102-yard TD.

Outside of that, the Panthers kept Elba off the scoreboard all night, meaning the Lanett defense still hasn’t allowed a TD since a Sept. 27 win over Handley.

Story had two rushing touchdowns in each half.

His first half scores came on a 1-yard TD rush and the other on a 64-yard run around left end.

Story will have a chance to tie Nix’s record next week when the Panthers take on Isabella, who defeated Millry in overtime on Friday.

“He played an overall great game. When he goes, we go,” Clifford Story said. “He kept wanting me to keep him in because he knew he needed six touchdowns to tie the record and had five tonight.”

The Panthers changed uniforms at halftime, going from gold in the first half to black in the second half. Story said the change was due to the weather.

“I called the state and asked because I knew these conditions were going to be horrible,” Clifford Story said. “So, they said we could do it as long as we didn’t put on white.”

Lanett will host Isabella next week at 8 p.m. ET.