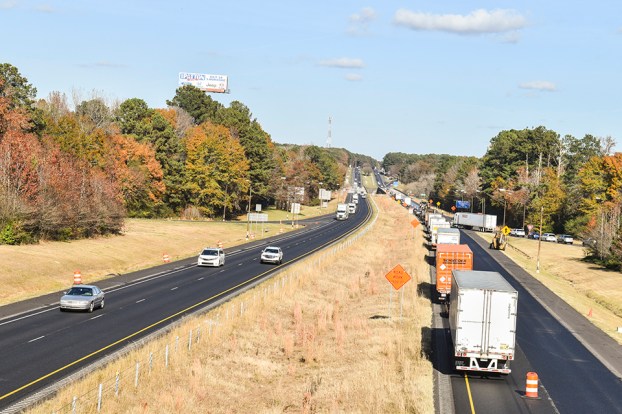 If you’re traveling by car on Thanksgiving, it’s good to remember some basic safety in the middle of holiday stress.

“The Georgia State Patrol would like to wish everyone a Happy Thanksgiving,” SFC Scott Jeter said.  “As with most all holiday periods, please remember traffic tends to increase. Be patient with other motorists and please don’t become distracted while driving. Not only can a cell phone become a distraction, but other items in your vehicle can be as well. Lastly, please drive sober and buckle up.”

To help traffic go more smoothly through Atlanta, the Georgia Department of Transportation announced in a statement Monday that all road closures would be suspended from 6 a.m. Wednesday, Nov. 27 to 5 a.m. Monday, Dec. 2.  Even with all lanes clear, traffic is still expected.  DOT expects the heaviest congestion in Buckhead and the northern perimeter.

Also, DOT warns that crews will still be working near the roadside, so use caution.

AAA Auto Club says that the heaviest traffic times through Atlanta will be Wednesday from 5:30 p.m. to 7:30 p.m., when everyone is headed out of town. Delays are expected to be three and a half times longer than usual.

Events in the downtown area may also slow traffic throughout the weekend.  Thursday is the annual Thanksgiving Day Half Marathon & 5K at Georgia State Stadium (formerly Turner Field), most shopping areas should be full on Black Friday, and Saturday is the Georgia vs. Georgia Tech game at Bobby Dodd Stadium.

“We typically see an increase in roadway fatalities during the holidays,” Georgia DOT State Construction Engineer John D. Hancock said. “I urge drivers to put down your cell phones, be alert and make sure you and your passengers buckle-up. Let’s make this a happy Thanksgiving for all.”

West Point Chief of Police Donald Britt had three main tips for holiday drivers. The first is to be well-rested.

“Tired drivers are a hazard,” he said.  “Make sure that you are well-rested before getting behind that wheel.”

Second is to have a designated driver if you are drinking alcohol. Alternatively, you can plan to stay at the location where you are, according to West Point PD.

Britt’s third tip is specific to the area: watch for deer.

“Those people who may drive after work and are on the road during dusk and nighttime are likely to encounter deer. Driving at a slower speed will allow you to react quicker if an animal darts into the roadway,” Britt said.

West Point PD also wants everyone to wear their seatbelts and stay off their cell phones.

“Obviously, buckle up and drive the speed limit,” Sgt. Stewart Smith said. “Put the phone down and use bluetooth. Plan ahead and expect delays.”

Smith said the most frequent violations the county sees are distracted driving and speed.

Lt. Mark Kostial of LaGrange PD said law enforcement officers will be on the road throughout the extended holiday weekend looking to prevent crashes by getting motorists to obey the speed limit, buckle their seat belts, obey the Georgia Hands Free driving law, and to take drunk drivers off the road. Kostial offers additional reminders for holiday driving.

“Ensure that your vehicle is properly maintained,” he said.  “If maintenance is not up to date, have your car and tires inspected before you make a long trip.”

Kostial also said to plan for traffic by mapping your route in advance and preparing for traffic.

Nix comments on his records being broken

AUBURN –Auburn quarterback Bo Nix had an eventful weekend both in terms of having his high school career passing records... read more