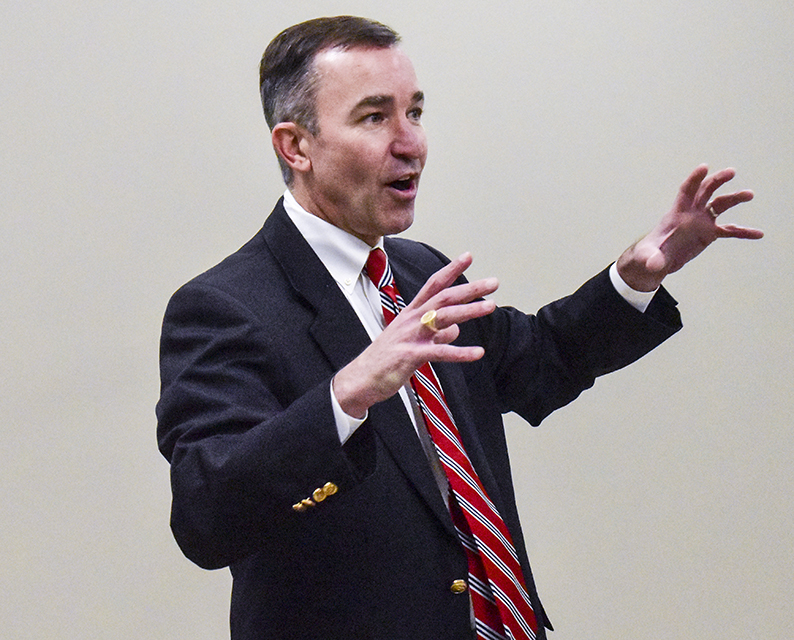 Local business leaders with the Greater Valley Area Chamber of Commerce learned about workplace laws Tuesday afternoon during a lunch program at the chamber office.

Jonathan Martin of Constangy, Brooks, Smith & Prophete in Atlanta, who has a focus on employment discrimination litigation, talked about several federal laws within the workplace that business owners and managers need to be aware of when dealing with a broad cross-section of employees.

Although Alabama and Georgia are an at-will employee states, meaning there’s no cause for wrongful termination, federal law still applies to several instances.

Martin said the biggest federal law is the Civil Rights Act of 1964. It’s the law that says a person cannot be discriminated in the workplace based on race, color, religion, gender or national original.

“If I was in Valley, Alabama, in 1955, talking to the people who are running businesses in this community, who would I have been talking to? White male Protestants, probably,” he said. “There was a time when not everybody had the same opportunities because of the color of their skin because of the gender because of how they worship because of where their family came from.”

Martin said Congress learned not everybody in the country was following those rules, so legislation was created to enforce it.

Other federal workplace laws during Martin’s talk included pregnancy discrimination. Martin said the act says employers must accommodate pregnant women the same way they assist disabled employees and those who comply with the Americans with Disabilities Act.

Martin says the ADA allows an employee to say if their health is getting in the way of doing their job. The employer has the right to ask the employee how the process can be fixed, and if it’s a reasonable request — the program is solved. However, Martin said if the request is unreasonable, the employee is not entitled to the accommodation of their choice but reasonable accommodation.

More legislation where Martin said he had seen an uptick in cases is the Age Discrimination Employment Act.

The Age Discrimination in Employment Act of 1967 protects certain applicants and employees 40 years of age and older from discrimination based on age in hiring, promotion, discharge, compensation or terms, conditions or privileges of employment.

Other quick tips from Martin during the talk included always being sure to make employees fill out an I9 before putting them to work because U.S. Immigration and Customs Enforcement (ICE) officials have been known to do spot checks to find illegal immigrants working.

Martin said when employers have problems with employees, it’s best to document everything and use progressive discipline.

“If that doesn’t work, invest a little more energy and effort and always write it down,” he said. “If that doesn’t work, put them on some sort of a final written warning. And heaven forbid we ever get to the termination phase, it’s important to remember that it’s a business decision and not a personal decision.”