Local couples share stories from opposite sides of Iron Bowl 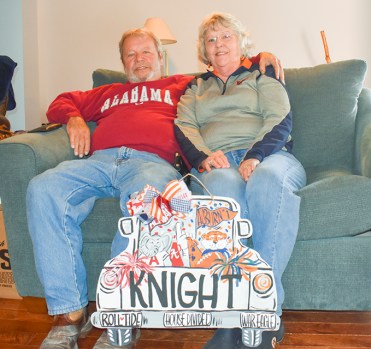 Jeannie and Sonny Knight have been husband and wife, as well as rivals for 52 years. Jeannie is the Auburn fan and Sonny roots for the Crimson Tide. 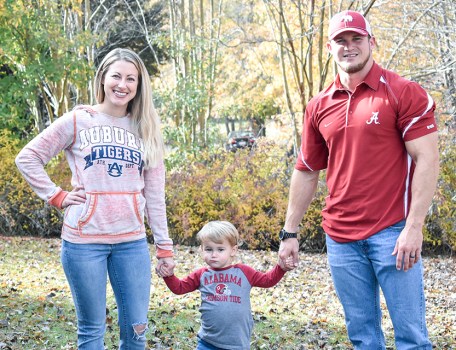 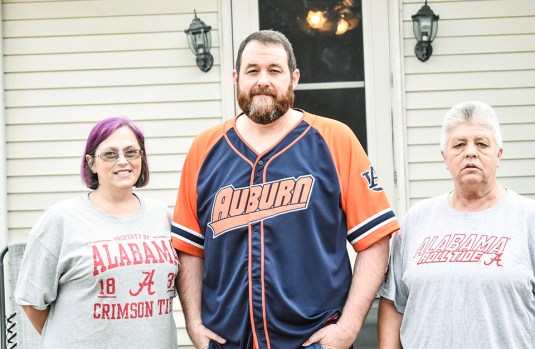 Leslie Perdue, the Alabama fan, and Travis Perdue, the Auburn fan, pose for a photo with Wanda (Leslie sister) Myers. 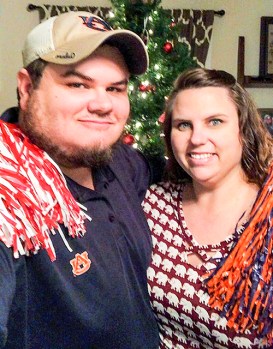 Jamie and Paige Musgrove have since 2013 but have been on separate sides on the Iron Bowl rivalry.

There are few rivalries in all of sports that can compare to the Iron Bowl.

For three hours on Saturday, the game split the state of Alabama in half. Some families in Valley sit on different couches or in different rooms to watch the game, and there are numerous fun bets made on the outcome.

There’s plenty on the line Saturday when the teams meet at Jordan Hare Stadium too, as Alabama hopes to keep its College Football Playoff hopes alive.

Here are some of the “divided households” in Chambers County, and how they plan to watch Saturday’s game:

Jeannie and Sonny Knight have been married for 52 years and have been rivals for 52 years. Sonny, the Alabama fan, and Jeannie, the Auburn fan, have the same Iron Bowl tradition every year: Sonny goes to the back of the house to watch the game, while Jeannie stays in the front, watching and cooking.

Right before the start of the game, Sonny will give Jeannie a kiss and head to the back of the house.

During the game if they see each other, no words are spoken. In 52 years of marriage, all they have to do is look at each other a certain way, and the message is received.

Jeannie’s favorite matchup was in 1972. In that famous matchup, Alabama was favored by 14 points, but the Tigers scored two touchdowns on two blocked punts giving Auburn the upset victory. That game is now commonly referred to as Punt-Bama-Punt.

Back then, Sonny was working as a second shift manager in a local mill at the time of the game. Jeannie called him and put the phone receiver next to the radio so he could hear the game.

Once Auburn blocked the second punt, Jeannie picked the phone to talk with Sonny. He hung up before she picked up the phone.

“He came home that night, and didn’t even speak to me,” Jeannie said. “Didn’t speak to me the next day either.”Sonny doesn’t have a favorite Iron Bowl story. He said that even though Auburn has had its moments (Punt-Bama-Punt and the kick-6 game were some examples), but Alabama responded the next year.

“He got me a seat at the 50-yard line,” Jeannie said. “I’m decked out in my Auburn stuff. Thirty-five to zero. We didn’t even score.”

When the Tigers aren’t playing Alabama, Jeannie cheers for Alabama, even though Sonny doesn’t believe her. Sonny will never cheer for the Tigers. In Auburn’s matchup against Georgia, the Crimson Tide needed an Auburn win to help their playoff chances.

The Knights are getting ready to move into a two-bedroom apparent, which might make the Iron Bowl a little more tense next year.

Jamie and Paige Musgrove were married in 2013. Paige, the Alabama fan, wanted a fall wedding, meaning they would most likely miss an Alabama and Auburn game.

Jamie made sure he was not going to miss one of Auburn’s crucial games, so he printed out the Tigers’ schedule and circled two weekends Paige could choose. She chose the third Saturday in October, missing the Alabama-Tennessee game. Jamie missed the Auburn-Florida Atlantic game.

One month later was the kick-six game.

Jamie and Paige usually stay at home during the Iron bowl, but in 2013, they decided to visit Paige’s family. They have a barn that has several big screen TVs and plenty of room for food. They call it the Bama Barn.

There were about 40 people at the Bama Barn for the game, and Jamie was the only Auburn fan.

“When Auburn ran the kick-6 back, I got really loud and obnoxious,” Jamie said. “I asked all of her family since they wouldn’t be using the barn for the SEC Championship the next weekend, if I could go watch it. I never got invited back after that.

I always joke that the two biggest days of my life happened just a couple of weeks apart. I have to be careful which one I say is my favorite.”

Both sides of the Musgrove family are Alabama fans, except for Jamie, so he has to always stay on his toes around the family.

“It’s definitely been a true test how much my family loves me to accept someone whose biggest flaw is that he’s an Auburn fan. It’s been comical at times,” Paige said.

Paige still gets invited to the Bama Barn for games, but Jamie hasn’t necessarily gotten the invite.

“They don’t ever say y’all,” Paige said. “It’s normally just you when they’re speaking of ‘you can come to the game.’ No one has ever said don’t bring Jamie. Of course, they’re not going to tell me that they are my family, but they never mentioned y’all.”

The Iron Bowl starts at the beginning of the week for the Musgroves. During the week, the two will message each other on Facebook and text, just talking trash about the other team.

“It is fun, It keeps things interesting,” Jamie said.

Usually there is a bet between the pair regarding the Christmas tree. If Auburn wins, the tree is put up on Dec. 1, but if the Crimson Tide wins, the tree goes up that day. This year, the bet was made early, the Georgia-Auburn game.

The Musgroves have their tree up already.

The Shivers — Patrick, the Alabama fan, and Aubryn, the Auburn fan — were married in 2015, but dated for years before they were married, so they have seen their fair share of Iron Bowls.

In the years before they were married, the Shivers made sure they were not together for the season finale. They also made a pact that the game would not get brought up during or after the game while they were dating.

Now that they’re married, the pact is still in effect, but Aubyrn has seen what goes through Patrick’s head during the game.

“He’s constantly, obnoxiously yelling at the TV. The entire game, scaring everybody that’s in sight because he’s hollering so loud,” Aubyrn said.

After the game, there isn’t any trash talking to the losing spouse because Aubyrn knows how much the game means to him.

“She’s been a part of some big time Auburn comebacks that have just been like emotional train wreck,” Patrick said.

One of those upsets was the kick-6.

The Shivers were outside of Jordan Hare Stadium tailgating the game but at separate tailgates. Once the kick was returned, they packed up and drove home, in almost complete silence.

“I was secretly giggling to myself, but I knew I couldn’t say anything because he’d probably start crying,” Aubryn said.

Patrick is a rare case, since he graduated from Auburn, but that didn’t change his loyalty. He let people know that he was an Alabama fan and kept the Alabama sticker on his truck. He graduated with a physical education major, graduating with about 25 people.

Since his class was so small, everyone knew he was an Alabama fan.

“I got to come in and brag in class the year that Bama won it, and then I had to listen to all the Auburn fans the year that they beat Oregon in the national championship,” Patrick said.

“We did make this bet a long time ago, and then Tua [Tagovailoa] got hurt. They’re trying not to let me out of the bet,” Patrick said. “I said that’s of a kind of like a push, these aren’t the same two teams now. And they’re like, ‘no, a bets a bet.’”

The Shivers have one child so far. They made a pact before it was born: if the child was a boy he is going to be an Alabama fan. If a girl, she’d be an Auburn fan.

Aubryn is now outnumbered in the Shivers household.

“The older he gets the wiser he’ll get,” Patrick replied.

Leslie, the Alabama fan, and Travis, the Auburn fan, Perdue have been married for 25 years. The most notable game for them in that span was the kick-six.

“That was a good one,” Travis said with a smile.

Leslie didn’t talk for a couple days after the game.

Travis was born and raised in Oregon, growing up a Ducks fan. When he moved to the Valley, he started to figure out which team to choose in Alabama. He started by watching games with Leslie, but he decided to cheer for the hometown Tigers.

“When you go to Auburn, it’s exciting to tailgate there, and the atmosphere is just awesome,” he said.

Travis and Leslie do put a side bet on the outcome of the Iron Bowl. If the Tigers win, Leslie has to wear an Auburn shirt the next day to church, while the opposite is true for Travis.

Last year when Alabama won, Travis had to buy an Alabama shirt for the next day. He got one with the smallest logo he could find.