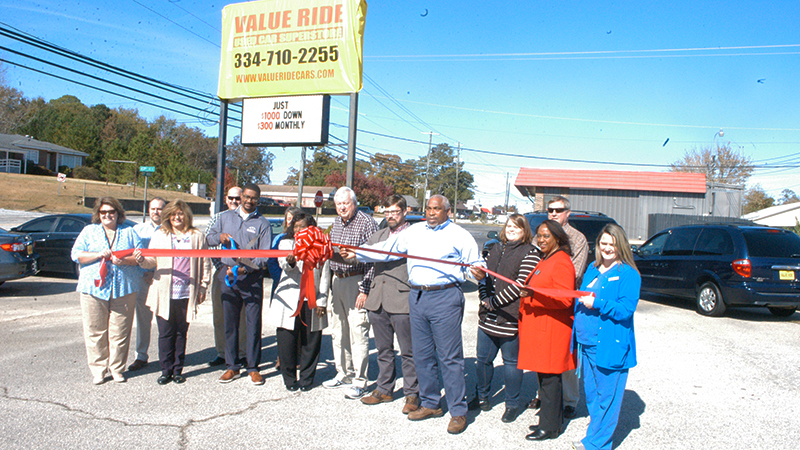 VALLEY — A used car lot that had been abandoned for several weeks in the heart of Valley off Highway 29 is a lively place for business activity once again.

The Value Ride Used Car Superstore has been open for business for several weeks now and played host to a ribbon cutting on Monday.

“We are trying to offer a good selection,” said Sales Manager Ike Grant. “We’ll have between 50 and 60 low mileage, good condition vehicles in the price range of $5,000 to $10,000 with very good financing terms of no more than two-and-a-half years. We sold 25 cars here last week.”

Selling cars is one of many hats Grant has worn over the years. He played pro football with the New York Jets at one time and recently retired as an educator for 40 years. He was the head football coach at LaFayette High for a time, officiated high school games and was a driver’s education instructor for many years. His son, Corey Grant, played football at Auburn and is now a member of the Green Bay Packers.

“We have two locations for our customers,” said T.J. Vines, the marketing manager. “We have one in the Opelika-Auburn area and this one in Valley. We want to have a good presence here and be able to sustain a strong business.”

Carrie Royster, executive director of the Greater Valley Area Chambers of Commerce, said that she could vouch for the kind of cars sold by Value Ride.

“I have purchased three from them and have been well pleased with what I got,” Royster said.

Mayor Leonard Riley said he was delighted to welcome a new business into the city.

“This is about the 15th or 16th one that’s opened in Valley in the past year,” he said. “Retail sales are going strong in the city right now. That’s good for the city and its citizens. I’m pleased to see a used car lot coming back to this site. Steve Thompson ran a very good business here with Langdale Motor Company. I must have bought ten cars from him over the years.”

Riley said he was pleased that the new business is owned by Forrest Ham, son of former Auburn Mayor Bill Ham.

“I always knew I was in good company whenever I sat down with Bill Ham and (former Opelika Mayor) Gary Fuller,” Riley said.

“I’d like to see some of their sales tax money flowing this way.”

State Rep. Debbie Wood said that like the mayor she must have bought ten vehicles from Langdale Motor Company as well.

“We are glad to see Value Ride here in Valley,” she said. “We hope you have much success here.”